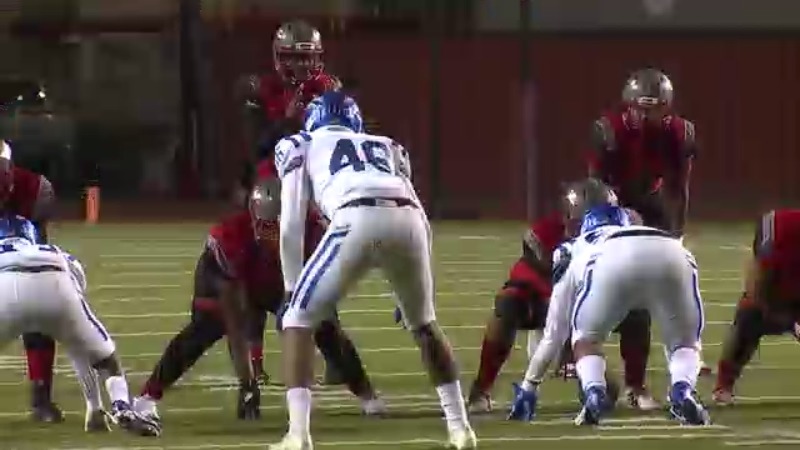 As the 2020 prep football season had numerous challenges due to COVID-19, the West Jefferson Buccaneers were trying to earn a playoff spot for the first time in eight years with a fourth new head football coach within that timespan.

Unable to have spring practice or summer preparations with his new team, Willie Brooks had to learn not only the names of the players, but what positions they play during a period of hybrid learning. Only half the team could work out in the weight room at a time, among all the many challenges that make bonding as coaches and players happen normally.

Somehow, Brooks was able to assemble a team with a new quarterback, a season-ending knee injury to his starting running back on the first offensive play of the scrimmage against Hahnville, and plugging-and-playing a few in different positions.

During a 5-3 regular season, including one win by forfeit and a loss to rival John Ehret on the last play of the game, respectability was restored on 2200 8th Street in Harvey, aka 2200 Buc Town.” Brooks turned that phrase into a team rally cry.

A playoff loss to Mandeville ended the season but did not take away from the overall success of the campaign, no matter how stranger the circumstances.

This past spring, a scrimmage with St. Augustine featured a great effort from both teams, packed stands of fans from both teams and more referees than the two teams on the field. There was a referee camp going on in New Orleans that week and the game was one of the two picked that weekend that would provide them with live action to call.

This summer features 7 on 7’s.

“This is my first spring and summer with this team, and I am taking advantage of every opportunity that we are allowed to have,” Brooks said.

The Bucs will feature a significant number of returning varsity players.

Offensively, it all starts at the quarterback position as senior Caivyn Johnson enters his second season as the starting signal caller.

Even though senior Jireh Childs missed all of last season, his rehab effort is coming along fine according to Brooks and should regain his job as the top running back. However, senior Joshon Barbie had a great season filling in for Childs so expect the former to have the ball in his hands often as well.

The challenge for Brooks is finding a way to get them both on the field at the same time. Brooks added, “Going into last season, Barbie was supposed to be our slot reciever, but did an outstanding job taking over for Childs.”

The rest of the offense shapes up with seniors Ronja Watson and Tobias Jefferson, junior EJ Garrison, and sophomore Shaun Nicholas as the receivers. The entire offensive line from last season returns with seniors Anthony Zelaya, Latour Jones, Edwin Cespedes, Arthur Ferreras and Julien Jules forming the most experienced unit on the team. Zelaya has been offered by Southern and Alcorn State.

Defensively, the main concern is to replace both cornerbacks and one safety, but the front seven is mostly intact from last season.

“We are actually replacing Shawn Senatus with his younger brother Alex,” noted Brooks. Shawn Senatus is playing these days at Co-Lin Jr College in Mississippi.

With the younger Senatus, a senior taking over at weak side safety, senior Izzy Smith is the free safety. Two more seniors, Alvin Karriem and Devaughn Smith, are set to man the cornerback positions.

The defensive front features with senior Tyrek Williams and sophomore Nehemiah Childs at the ends with junior Darius Ard at nose tackle and senior Jacob Henderson at defensive tackle. Junior Davon Bocage will also see action in the interior.

The linebacker corps will consist of sophomore Cedric Williams in the middle with junior Travis Tolliver at weakside and senior Princeton Rodrigue at the Rover position.

The reliable foot of senior Caleb Zelaya, who missed about half of last season with an injury, will be a welcomed sight at place kicker.

“Caleb was perfect kicking in the St. Aug spring game, and he’s been accurate throughout the off-season work.” Brooks added. “With our precision offense, if we get to the opponent’s 30, Zelaya gives us a great chance to put points on the board.”

The 2021 schedule presents some intriguing matchups. It all starts with a scrimmage against De La Salle before West Jeff takes a trip to LaPlace to play East St. John in their jamboree.

The three non-district games begin with a home game on Friday, September 3 against Holy Cross, followed by September 10 vs. John F Kennedy and then the first of only three games for the Bucs away from Hoss Memtsas against George Washington Carver at Joe Brown Stadium on September 17.

The seven District 8-5A games kick off with rival John Ehret on September 24 as the home team, then Higgins on October 1 as the visitor before Chalmette comes to the Westbank on October 8.

On October 15, the Bucs go to Joe Yenni to play Bonnabel followed by back-to-back home games on Thursday, October 21 against Grace King and on Saturday, October 30 against Riverdale. The regular season ends November 5 at Yenni against the West Jeff’s oldest rival, East Jefferson.

For the second straight season, all West Jefferson football games will be available through live audio webcastes on the JM Sports Network. We welcome 1986 West Jefferson graduate and former Buccaneer player Simmie Carter as color analyst. Yours truly, a 1981 West Jefferson graduate, will be doing the live play-by-play of the games. Carter played college ball at Southern Mississippi and professionally for the New York Giants.

Last season fulfilled a wish of Willie Brooks to have a winning season and makes the playoffs.

This season, a home playoff game and a postseason win are on the new wishlist.

Johnny Marchese is a lifelong resident of Southeast Louisiana, born in New Orleans and raised in Terrytown. Johnny is a 1981 graduate of West Jefferson High School, then after a one year volunteer stint at WWOZ 90.7 FM in New Orleans. He enlisted in the United States Marine Corps and served as a field radio operator. Upon returning from a…