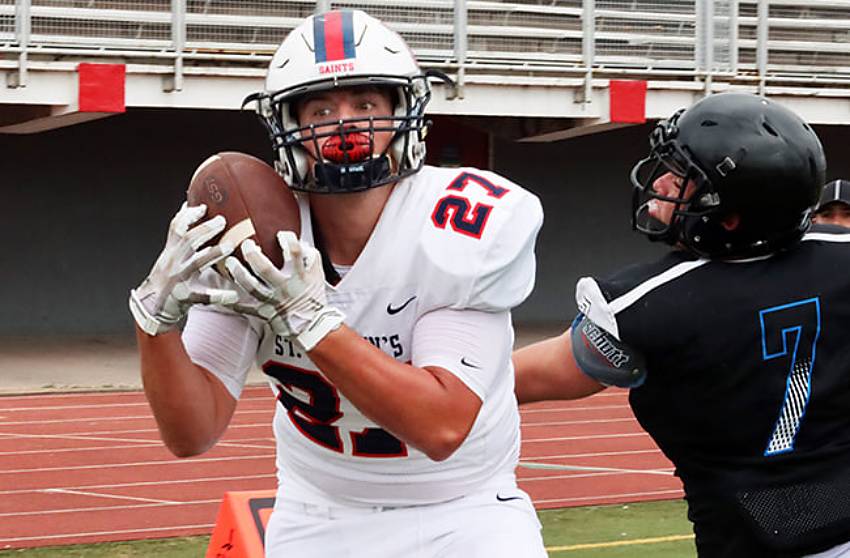 While there was promise through some talent on hand, the 2020 season was a lost opportunity for St. Martin’s Episcopal.

The Saints dealt with the pandemic, as did all schools, but were only to get six games in, including a playoff loss to eventual state champion Calvary Baptist.

Entering his fourth year, Frank Gendusa has won 176 games as a head coach in his illustrious career.

Gendusa previously served as the head coach at Newman and at Fort Worth Country Day School (Texas).

“It was difficult last season with just six kids and then having to play the best team in the state with only 19 kids dressed due to COVID,” Gendusa said. “It was a challenge, to say the least.”

The promise remains for the 2021 season and it is real.

The Saints must replace a pair of excellent players in Monte Lewis and Jonathan Castaneda but have 14 starters returning from last season, including eight on offense.

St. Martin’s will work hard to limit turnovers after committing 17 a year ago when the Saints played just six games.

“We feel pretty good as we are up to about 30 players on the roster,” Gendusa said. “Some are freshmen. We have some experienced linemen back. We have just five seniors so we are still basically a young team. We have a nice junior class. We should be more competitive this year.”

“He’s been starting since his freshman year,” Gendusa said. “He finally has a full grasp on the offense. We are hoping to open up the offense and throw the ball more with him this season. We don’t have the big backs like we had last year.”

“Smith played some last year,” Gendusa said. “We are not very big but all of our backs will be quick and shifty.”

“Seth started for us last year,” Gendusa said. “Saucier is new while Daniel is a good athlete and was on the JPRD baseball championship team. That is his primary sport but he will help us at wide receiver.”

Junior tight end Grant Gendusa (6-2, 220) returns to play for his grandfather and is a standout for the Saints.

“Grant will be back and he has been playing the position since eighth grade,” Gendusa said. “We know he can block well and we want to get him more involved in the passint game.”

The strength of the offense is up front where the line returns four starters.

“We have a few young guys but the Shank brothers are very seasoned players,” Gendusa said. “Hogan and Bejeran played a lot as freshmen last year and Raines should be solid. We expect it to be a strength.”

Six starters return on the defensive side of the ball for St. Martin’s.

The defensive line features Skylar Shank, who was in on 37 tackles, including three sacks a year ago. Shawn Shank returns as well, as does junior defensive end Tim Roberts (6-1, 195) and junior Garrett DeViney (6-0, 175).

“It is an experienced group of front,” Gendusa said. “We have three or four guys up front with experience, for the first time.”

A pair of linebackers return in Gendusa and Brower. Bejaran is the other starter.

“Grant may play some at linebacker if he is not at defensive end,” Gendusa said. “Bejeran is another player we will look at really hard at linebacker. He’s a tough player.”

The schedule opens with Ben Franklin on Sept. 3 before the Saints host Fisher, Catholic Pointe Coupee and Hanson Memorial in succession.

“Catholic has played for a state championship recently,” Gendusa said. “We are playing 1A and 2A schools, which fits our program.”

District 9-1A competition begins on Oct. 8 at Wenzel Field against Country Day before a non-district, Homecoming contest against Springfield.

The final two district games have the Saints at Reserve against Riverside Academy and at Edgard against West St. John.

“It is a competitive stadium,” Gendusa said. “Country Day will be solid. Riverside will be good again, even without Gage Larvadain. I am not sure what is going on at West St. John with Coach Brandon Walters leaving but they are always talented.”

While not set on specific goals, the mission is clear for St. Martin’s.

“We are looking to try to get better,” Gendusa said.