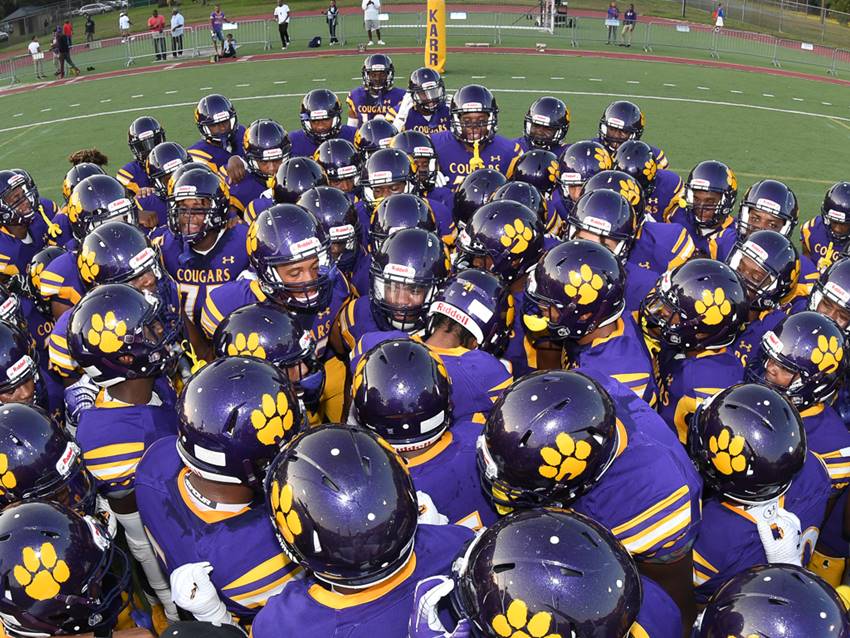 You can’t win them all.

While that axiom is obviously true, it was not so obvious to the Karr football program.

The Cougars marched through Class 4A, winning four consecutive state championships from 2016-19.

The Cougars carried a lead into halftime of the 2020 state championship game in Natchitoches.

Then, Carencro decided enough was enough, dominating the second half in a 35-19 victory, ending the tremendous streak of Karr.

How dominant has Karr been?

The Cougars have played in nine of the last 10 Class 4A state title games and have won five state titles since 1993.

Wounded by the loss, the Cougars are a dangerous, motivated animal on the prowl in 2021 under seventh-year head coach and former Karr star Brice Brown.

“It was disappointing to lose a year ago and yes, we have not forgotten and we have reminded our players of it and we have been reminded of it quite a bit,” Brown said. “Yes, it is something which motivates us. We’re still striving to be consistent. I have an excellent staff that supports everything we’re doing together. We have so many former Karr players coaching on our staff.”

What does Karr have to do to return as a state champion in 2021?

With 18 starters returning, it is hard to envision a 2021 state title game not including Karr.

“A.J. has been working his tail off,” Brown said. “He’s really been impressive with his leadership and command of the huddle. We return everyone on offense except for Destyn Hill (wide receiver) and Kevin Marigny (running back).”

The wide receiver position is loaded, despite the graduation of Hill.

LSU commit Aaron Anderson (5-10, 190) is an electric player, coming off a season with eight touchdown receptions and he will be the primary target.

Senior Yarun McMath (6-1, 180), the younger brother of Racey McMath, is ready for a breakout season after catching 13 passes with a three touchdown receptions a year ago. Junior Kylen Lampton (5-10, 165) returns as well after catching 21 passes a year ago with four touchdowns.

“The most surprising thing is that our offensive line has been real consistent,” Brown said.

The defense will be very good with nine starters returning from 2020.

“We are looking for Tygee to have a big year,” Brown said. “When you have guys playing all four years, especially defensively, it is huge.”

“Morgan is a leader at middle linebacker for us,” Brown said. “Tory has a good amount of college offers. We return all our linebackers except for one from last season.”

“We return our whole secondary and that’s going to help our defense out,” Brown said.

The schedule is, as always, fun for observers and challenging for the Cougars, who duck no one.

The season opens with four straight home games, opening against defending Class 3A state champion Madison Prep. Then comes a rematch with St. Augustine, who upset Karr 27-26 a year ago, followed by another tough home game with the ninth-ranked team in the country American Heritage of Plantation, Florida and another tough opponent in Scotlandville.

The incredibly challenging schedule continues in week five at 3A power St. James, which won a state championship in 2019 before the Cougars renew their rivalry with 4A power Warren Easton.

District 10-4A play begins against arch-rival Landry on October 22 at Behrman Stadium, followed by home games with Belle Chasse and Helen Cox.

The advantage of the schedule is that Karr will play seven of their 10 games in the friendly confines of Behrman Stadium.

“We always try to play the best teams in the state just for competition purposes,” Brown said. “The key is good teams playing other good teams not only to build depth but to build competitive spirit and I think that’s the games that people want to see. The fans are going to be real excited. It’s going to put our depth to the test.”

With a championship coach, a host of superb players and a healthy motivation, look out for Karr in 2021.

“We like our team, we like our chances and we look forward to keep building,” Brown said. This is one of the deeper teams we’ve had in a while.”