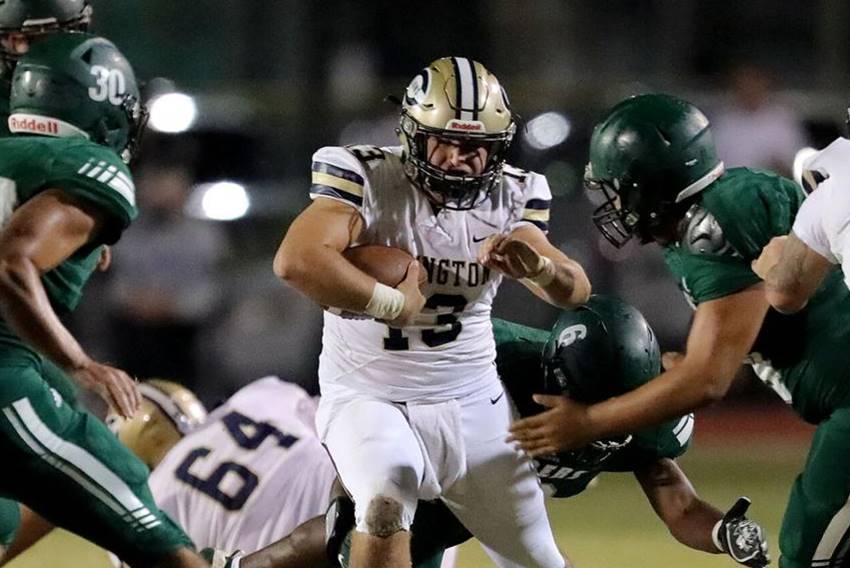 The 2020 prep football season was difficult for everyone in Louisiana (and around the country, for that matter).

Nothing seemed normal, including preparation for the season.

When you have a young team, not having a chance to gather together as a team or work together to bond was particularly difficult.

That was certainly the case for the Covington Lions.

With a rich history of success, Greg Salter saw his young Lions struggle through a 2-5 season, though Covington did reach the Class 5A state playoffs before falling to eventual state champion Acadiana in the opening round.

“We knew it would be tough going in with only four returning starters last season,” Salter said. “It was a young team that could have benefited from a proper offseason, every practice and rep possible and we didn’t have it. We were playing catch-up from the start. It is not an excuse but it was what we dealt with. I am proud of how hard we played.”

Entering his ninth season, Salter has 11 returning starters so the youth of a year ago has turned to experience this season.

On offense, the job is to replace quarterback Blake Sharp.

“We have good candidates,” Salter said. “Blackwell has started since his freshman year at outside linebacker. He is just a football player. He started with us as a quarterback but we needed him on defense. He will get the opportunity but we will use him on defense. We have two good young players in Coakley and Elzy who bring different skill-sets to the table. Coakley has a strong arm and is athletic. Elzy does everything right.”

The Lions can lean on their running game with a pair of solid players returning.

Also returning as a starter at running back is senior Reece Poillion (5-8, 180) while sophomore David Harris (6-1, 190) has a bright future.

“We like our running back position,” Salter said. “We have all of our skill guys back and we will still be relatively young.”

“James was very good for us a year ago and Chatman gained valuable experience last season,” Salter said. “We have size and ability on the outside.”

Anchoring the offensive line is senior left tackle Logan Potter (6-5, 285), a returning starter an college prospect with an offer from Southeastern Louisiana.

“Your offense will be as good as those guys up front,” Salter said. “Potter is big, physical with a good work ethic. Champagne got a lot of experience as a freshman a year ago. He is just starting to develop. He has the mentality. He will do nothing but get bigger and stronger. We have smart, scrappy kids who will work hard and improve.”

There is experience at linebacker as well.

In the secondary, senior Tristan Guillory (5-10, 155) returns at cornerback and will be joined by James while senior Ian Goodly (6-0, 175) is a returning starter at free safety and a college prospect. Senior Paxton Carpenter (6-0, 165) is the strong safety.

“We have key playmakers back on defense that we can lean on,” Salter said. “I believe our secondary will be our strength going in. Goodly started as a sophomore and he enters his third season starting. He is aggressive with great instincts and a great work ethic. Goodly has a Southeastern offer. We will count on a few guys to play both ways.”

The schedule finds the Lions opening at home against Broadmoor and Franklinton before a tough road contest at Dutchtown.

“We usually play Franklinton week one but they could not play that week so we will play them week two,” Salter said. “We enjoy playing Dutchtown even though they have gotten the better of us recently. We found Broadmoor, who had an opening in week one.”

As always, District 6-5A figures to be balanced.

The Lions should be in the mix, opening league play at Ponchatoula, one of the favorites, on Sept. 24. After hosting Fontainebleau, Covington heads across town to play at St. Paul’s. Home games with Hammond and Slidell follow. Covington will travel to Northshore and wraps up the regular season at home against Mandeville on Nov. 5.

“Ponchatoula will be as good as any team in the state,” Salter said. “We played them tough last year and lost by seven points. We feel we can compete with them. They will be fun to watch but not fun to coach against. Otherwise, anyone can beat anyone in the league.

While the 2020 season was a trial by fire, the Lions have put out those fires and figure to rain on the parade of some opponents in 2021.

“Our big emphasis is the little things,” Salter said. “We were competitive in every regular season game last year but could not finish. We were close but left with a bad taste more often than not. We probably had more penalties and turnovers than anyone in the area. We are harping on fixing that. Hopefully, that will get us on the right side of the scoreboard.”