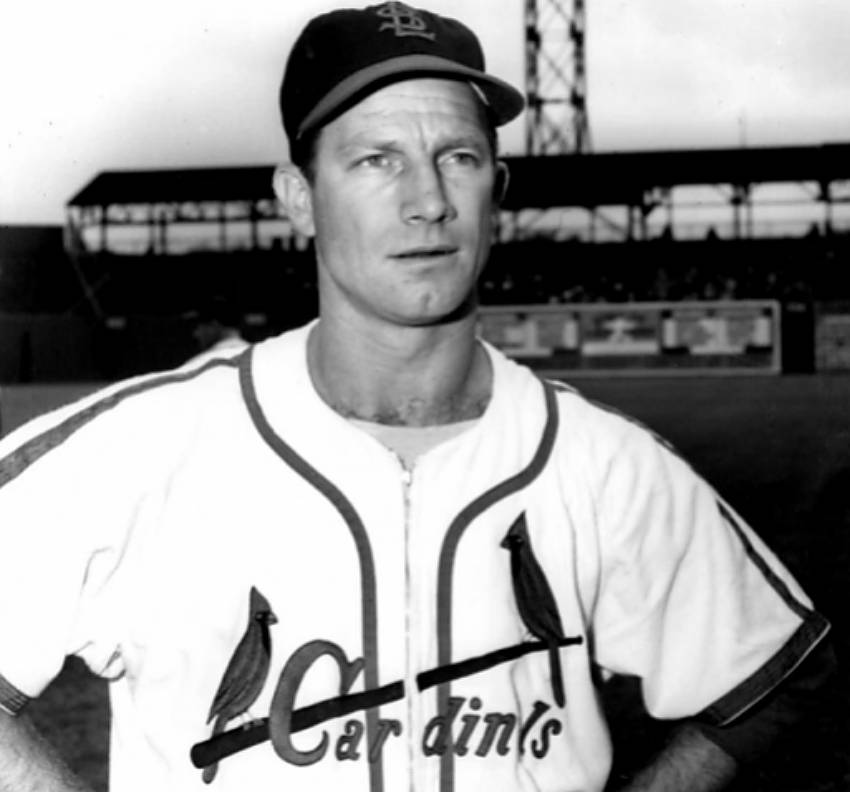 Lou Klein had one of the more interesting careers in baseball, although he had limited success as a player in the major leagues. He is remembered for being a participant in two of the strangest times in major-league history, when 18 major leaguers “jumped” to the Mexican League in 1946 and the Chicago Cubs experimented with the “College of Coaches” in 1961.

Klein had prepped at S. J. Peters High School in New Orleans during the late 1930s. He was signed by the St. Louis Cardinals in 1940 and by 1943 had secured the second baseman’s job with the big league Cardinals. He exceeded all expectations in his rookie season by batting .287, with seven home runs and 68 RBIs for the pennant-winning Cardinals. The Cardinals dominated the New York Yankees in a five-game World Series. Klein was named to the major leagues’ All-Rookie team by The Sporting News.

Like most major leaguers at the time, Klein saw his baseball career interrupted by World War II. He enlisted in the Coast Guard and missed all of the 1944 season as well as most of 1945 while in military service. Klein made a poor decision by being enticed to play in the Mexican League in 1946, because he and other players were ultimately banned from Organized Baseball until 1949.

Klein’s last two major-league seasons as a player occurred in 1949 and 1950. He bounced around the minors until 1958, including the 1953 season with the New Orleans Pelicans. From 1955 to 1958, he also served as manager of his minor-league team in the Cubs organization. He ended up as a coach and part-time manager of the Cubs until 1965, as part of the “College of Coaches.”

Here are more details about Klein’s participation in two of baseball’s most unusual times:

Klein among MLB players who “jumped” to the Mexican League

In 1946, Mexican businessman Jorge Pasquel became president of the Mexican League, in which he was also was an owner of a team. Wanting to raise the status of the league and his team to be comparable with the major leagues in the United States, Pasquel and his brother Alfonso lured major-league players to play in Mexico at salaries higher than they were making in the United States. Lou Klein was one of 18 players who “jumped” to the Mexican League. Other prominent major leaguers included Max Lanier, Mickey Owen, and Sal Maglie. Klein, who had returned to the St. Louis Cardinals after World War II, reportedly accepted $50,000 for his services.

The players who defected to the Mexican League were banned from baseball by commissioner Happy Chandler for five years. The allure of the Mexican League didn’t pan out, as the Pasquel brothers fell on tough times financially. It left the affected players in limbo for a number of years. Klein played for independent teams in Mexico and Canada. Chandler reinstated the players in 1949, and Klein returned to the St. Louis Cardinals.

Klein a member of failed “College of Coaches”

Chicago Cubs owner Philip K. Wrigley became frustrated after the 1960 season in which his team won only 60 games and finished in seventh place (out of eight teams). Furthermore, the team had not finished over .500 since 1946. He developed a plan for the 1961 season to use a collection of veteran coaches from his organization to rotate through his minor-league system and the Cubs’ major-league team. The major league coaches would take turns as “head coach” on a rotating basis throughout the season, rather than having a single manager. Wrigley’s concept became known as the “College of Coaches.”

In 1961, Klein joined the major-league coaches after having been the manager of Carlsbad in the Class D Sophomore League for 127 games. He took over as the fourth “head coach” near the end of the season, and the Cubs had a 5-6 record during his tenure. Wrigley’s approach produced results that weren’t much better than the previous season. The Cubs remained in seventh place with 64 wins.

However, the Cubs continued the College of Coaches approach in 1962. Klein was the second manager in the rotation this time, and his teams won only 12 of 30 games. Overall, the Cubs regressed, finishing in ninth place (out of 10 teams) with only 59 wins, the lowest number in team history.

The Cubs’ failing experiment was essentially abandoned the next season as Bob Kennedy retained the head coach’s job throughout the entire season. He continued in that role until June 1965, when he was moved to the Cubs’ front office. Klein finished out the season as head coach with a 48-58 record.

Wrigley’s new-fangled approach turned out to be one of the most disastrous strategies in baseball’s history.