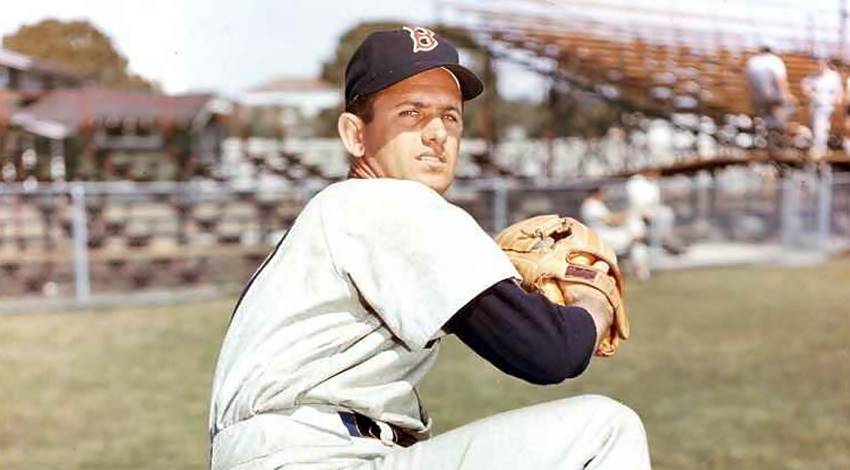 Mel Parnell was a short, skinny kid when he pitched for S. J. Peters High School in New Orleans for the first time during his senior year in 1941. It was an improbable start of an eventual professional career, yet big-league scouts saw something in his abilities that ultimately earned him a bronze plaque in the Boston Red Sox Hall of Fame.

Parnell’s high school team was a talented group. Seven of its players went on to play professional baseball, including pitcher Ray Yochim and infielder Bo Strickland who reached the majors. Parnell attracted attention from scouts when he struck out 17 batters against Behrman in a prep league matchup. The left-hander followed that game later in the week with a five-inning no-hitter for a local semi-pro team.

While most of his teammates signed with the St. Louis Cardinals, Parnell chose the Boston Red Sox in 1941. He won 16 games for Class C Canton in his second pro season in 1942, but then his career was put on hold while he served three years in the Army Air Corps during World War II.

Coming out of spring training in 1947, he made the Red Sox’s big-league roster, getting his mound debut on April 20.  But he was optioned to Triple A Louisville by mid-season, where he suffered a broken finger that limited his playing time during the rest of the season.

His career took off in 1948 when his 15 wins helped the Red Sox finish the regular season in a tie with Cleveland for the American League lead. In a one-game tie-breaker playoff that Parnell later said he wished he had started, the Indians defeated Boston for the pennant.

Parnell followed with the best season of his career in 1949, as he finished with a league-leading 25-7 record and 2.77 ERA. As the workhorse of the Red Sox rotation, he threw 27 complete games in 295 innings. He was fourth in the AL MVP voting. His 25 victories remain the most ever by a Red Sox left-hander in a single season. (Babe Ruth is second with 24.)

Parnell suffered a wrist injury in 1954 that later contributed to arm troubles when he tried to return to action too soon.  He never regained his form and finished his playing career in 1956 at 34 years of age.

Despite the disappointment of his injury-plagued final few seasons, Parnell had one last major-league hurrah in his final year. He threw the only no-hitter of his career against the Chicago White Sox on July 14, 1956, at Fenway Park. The start of the game was delayed an hour, causing Parnell to have to warm up twice.  But it didn’t seem to matter, as he wound up facing only 28 batters–the White Sox’s only three baserunners coming on two walks and an error by the Red Sox shortstop.  Meanwhile the Red Sox put up four runs on eight hits.

Facing former Red Sox teammate Walt Dropo as the last batter of the game, Parnell fielded a ground ball to the right of the mound, whereupon he raced over to tag first base for the final out and cinched his place in history. Parnell said, “When he (Dropo) hit it back to me I was so keyed up I was afraid I’d throw it away and I knew I could beat him to the base so I ran for it.”

Parnell acknowledged he was aware he had the no-hitter going. “From the seventh inning on as the crowd cheered each putout louder, I couldn’t help but know it.” Teammate Jackie Jensen told Parnell in the seventh inning not let a ball be hit to him in right field, because he didn’t want to be responsible for spoiling the no-hitter.  In catching his first no-hitter, Red Sox backstop Sammy White said, “Mel called his own game all the way because he knew what was going for him. He threw about 80 per cent sinkers.”

Parnell currently holds the Red Sox record for most wins (123) by a lefty, ahead of Lester (110) and Lefty Grove (105). He was elected to the Boston Red Sox Hall of Fame in 1997. He and Howie Pollet (a 1938 Fortier High School alum and Parnell’s next-door neighbor) rank as the all-time top MLB pitchers from the New Orleans area.  Parnell died In New Orleans on March 20, 2012, at 89 years of age.