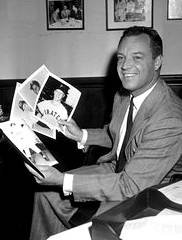 Joe L. Brown was one of the longest-tenured general managers in Pittsburgh Pirates history. From 1955 to 1976, he was the head of baseball operations for the Pirates organization that won two World Series championships.

Prior to taking on the role with the Pirates, Brown held front office jobs as general manager and president of the New Orleans Pelicans, a Pirates affiliate, from 1951 to 1954.

Brown was the son of Joe E. Brown, a popular comedian and actor who started on Broadway in the 1920s and eventually became a film star in Hollywood in the 1930s and 1940s. The elder Brown had played semipro baseball and reportedly was made an offer to play for the Boston Red Sox, but he chose an entertainment career path instead.

The younger Brown didn’t follow in his father’s footsteps in show business, instead assuming his interest in baseball with the intention to become a professional player. Brown became acquainted with Branch Rickey, who became a mentor to him. However, Brown broke all the bones in his right elbow as a teenager while working out with the Pirates in spring training. The injury ended his hopes as a baseball player.

In the years surrounding World War II, he worked in various jobs with teams in the low minors. He began working for the Pirates in 1950 as business manager of their Class-B Waco affiliate. In 1951 he joined the New Orleans Pelicans as general manager.

The Pelicans had suffered through several lean years prior to Brown’s tenure, and his first season with them wasn’t any better with a 64-90 record in 1951. He was appointed president of the club the next season, and with future Pirates manager Danny Murtaugh at the helm, the Pelicans began a turnaround.

Pittsburgh promoted Brown to the Pirates’ front office in 1955, and he replaced Branch Rickey as general manager the following year. He inherited a young team that finished in seventh place in 1956 (66-88-3) and 1957 (62-92-1). He turned to his former Pelicans manager Murtaugh toward the end of the 1957 season as his new Pirates manager.

The 1958 Pirates won 22 more games than the previous year and finished in second place in the National League, eight games behind Milwaukee. A full season with Murtaugh as the manager and the maturation of young players such as Roberto Clemente, Bill Mazeroski, Bill Virdon, and Bob Skinner made a dramatic difference. Brown was recognized by The Sporting News as Major League Executive-of-the-Year.

The Pirates took a step backward with a fourth-place finish in 1959. With the addition of pitcher Harvey Haddix, third baseman Don Hoak, and catcher Smoky Burgess, the Pirates finally put it all together in 1960 and won its first pennant since 1927. They upset the New York Yankees in a dramatic, seven-game World Series, only their third world championship in franchise history.

For the next nine seasons, the Pirates could finish no higher than third place. Brown brought back Murtaugh as manager, and they won the National League East Division in 1970 with a team that Brown had re-engineered to include young players, Manny Sanguillen, Richie Hebner, Al Oliver, Dave Cash and Bob Robertson, to complement veterans Clemente, Mazeroski, and Willie Stargell. However, the Pirates were swept in three games by the Cincinnati Reds in the National League Championship Series.

The core of the team remained intact in 1971. Brown added pitchers Nelson Briles and Bob Miller, helping the Pirates repeat as NL East Division winner. This time they defeated the San Francisco Giants in the NLCS and then proceeded to defeat the Baltimore Orioles in seven games in the World Series.

The Pirates won three more division titles (1972, 1974 and 1975) with Brown leading the Pirates’ front office. Although he retired after the 1976 season, he had helped the Pirates build the foundation for another World Series title in 1979.
Former Pirates player and scout Lenny Yochim had a close relationship with Brown. A New Orleans native, Yochim pitched for the New Orleans Pelicans, while Brown was team president. As a scout with the Pirates, Yochim worked for Brown when he was the Pirates GM.

Brown enjoyed the most successful run of any general manager in Pirates history. He was the recipient of the inaugural “Pride of the Pirates” award in 1990, an honor that recognizes members of the Pirates organization who have demonstrated the qualities of sportsmanship, dedication, and outstanding character during a lifetime of service.