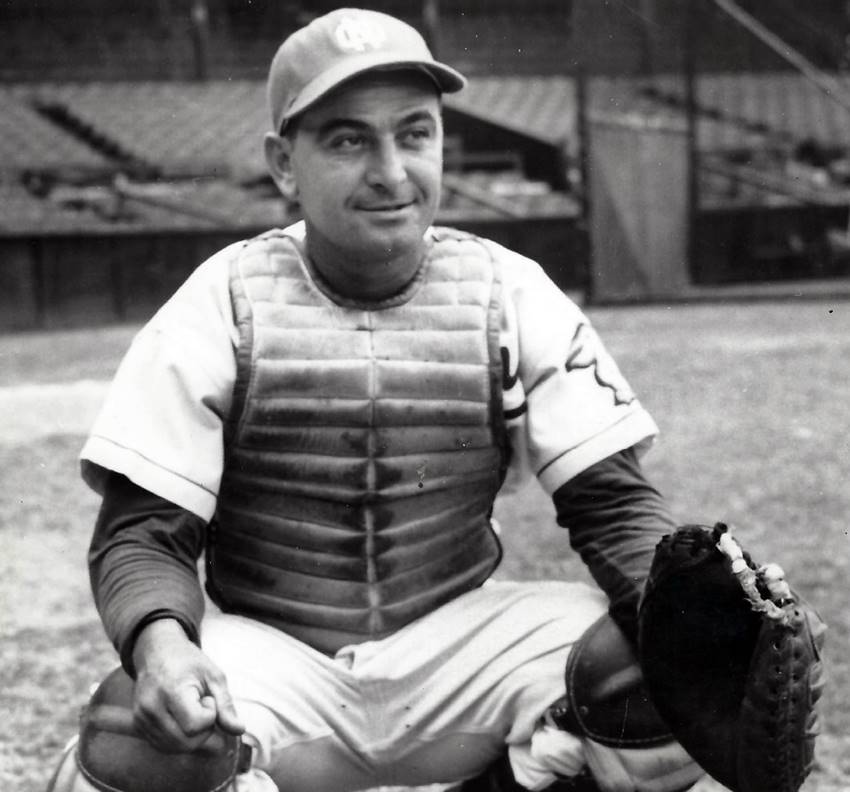 New Orleans is the birthplace of Fats Dantonio, as well as Fats Domino.  Except Dantonio wasn’t a musician.

Instead he was a homegrown baseball talent that played for the New Orleans Pelicans and got an improbable opportunity to play in the major leagues, even though his stint was brief.  However, it earned him a place in the memories of New Orleanians long after his playing career ended.

John “Fats” Dantonio was born on December 31, 1918.  His parents, John James and Louise D’Antonio were of Italian descent.  Dantonio later changed the spelling of his last name, removing the apostrophe.

Dantonio got his nickname as a result of being contrasted with his childhood friend, Russell Gildig, who had a wiry, thin frame. Dantonio’s other friends began referring to him as “Fats,” even though he wasn’t overweight.  In any case, the nickname stuck with him for the rest of his life (As a professional player, he was listed as 5-feet-8 and 165 pounds).

He attended Jesuit High School at a time when the prep school was dominating other high school programs in the state.  He was member of the 1936 Louisiana state championship team. As a junior Dantonio hit for a .444 average. The team finished 11-0 and defeated Ouachita for the title, the fifth of Jesuit’s seven consecutive state championships.  His teammates included future major leaguers Connie Ryan and Charlie Gilbert, as well as Jesse Danna, who played in the minor leagues. This Jesuit squad was later rated the best high-school team of all time in New Orleans.

Dantonio graduated from Jesuit in 1937.  Attending college was not an option for him, since his family could not afford it.  He pursued a baseball career, first signing with an unaffiliated team in Texas in 1938 at the Class D level.  The St. Louis Cardinals organization signed him the next season, where made the all-star team as a shortstop for Class D Caruthersville.

However, his fielding as a shortstop was erratic and the Cardinals converted him to a catcher.  With Class C Springfield (Missouri) in 1941, he was a teammate of future Hall of famer Stan Musial.  Their families shared an apartment and they fished together during off days, developing a relationship that lasted long after Dantonio’s playing days.

Dantonio signed with his hometown New Orleans Pelicans (then a Cardinals affiliate) in April 1942 to fill a gap at the catcher position.  He became a batterymate for New Orleans natives Al Jurisich, Ray Yochim, and his high school teammate Jesse Danna.

World War II had begun taking its toll on professional baseball, as many of the players were being drafted into service.  Dantonio received a medical exemption due to his flat feet and a recent surgery to remove a tumor from his arm.  Instead he worked for New Orleans-based Delta Shipyards in a defense-related job in 1943 and played in a semi-pro league on Sundays.  Desperate for players, the Pelicans (who had switched to an affiliation with the Brooklyn Dodgers), signed Dantonio in May as a backup catcher who only played in the Pelicans’ home games.  He hit a respectable .299 in only 41 games.

Dantonio returned to full-time status with the Pelicans in 1944.  Seven of the Pelicans’ starters were native New Orleanians.  He batted .327 in 107 games and attracted the attention of the Dodgers’ major-league front office, which was still in need of replacements for regulars who remained in the military.

In normal times, Dantonio would have been an unlikely candidate for promotion to the majors.  Just a year earlier, he was playing for a semi-pro team and part-time in the minors.  However, the big-league Dodgers were going nowhere in the standings and wanted to get a better look at Dantonio for the future.

The 25-year-old Dantonio made his major-league debut on September 18 against the Boston Braves and struck out in his only at-bat.  He played in two other Dodgers games that season.

He was slated to start the 1945 season with Montreal, the Dodgers’ top minor-league club, but he got a break when Brooklyn’s regular catcher Mickey Owen was inducted into the Navy.  Manager Leo Durocher made Dantonio his starter, but he failed to hit consistently and was error prone.  He wound up starting 36 games, hitting .250 with no home runs and 12 RBIs in 143 plate appearances.

Most of the major-league players who had gone into military service resumed their careers at the start of the 1946 season.  Other catchers passed him on the Dodgers’ depth chart, and he wound up spending the season with St. Paul, where he hit .306.  Negro League catcher Roy Campanella entered the Dodgers’ system in 1946 and became entrenched as their catcher starting in 1948, all but assuring Dantonio would never again get an opportunity for a starting job with the Dodgers.

After playing the 1947 season with St. Paul, Dantonio returned home to play for the Pelicans in 1948 season when the Pittsburgh Pirates acquired the franchise.  He appeared in 79 games and batted .247.  At age 29, it was his last professional season.

After his baseball career, Dantonio became a local celebrity in New Orleans, operating two New Orleans neighborhood restaurants and bars for more than 44 years.  He remained a popular baseball figure in the Crescent City, where he stayed active in local baseball circles by playing in charity games for more than 20 years.  He assisted in running NORD baseball leagues and coaching numerous youth teams.  He started the Babe Ruth League in New Orleans for 13-15-year-olds.

Just as Fats Domino earned his share of recognition in various musician halls of fame, Dantonio was recognized with local athletic honors.  He was inducted into the Jesuit High School Hall of Fame and the Diamond Club of New Orleans, as well as the Louisiana American Italian Sports Hall of Fame.