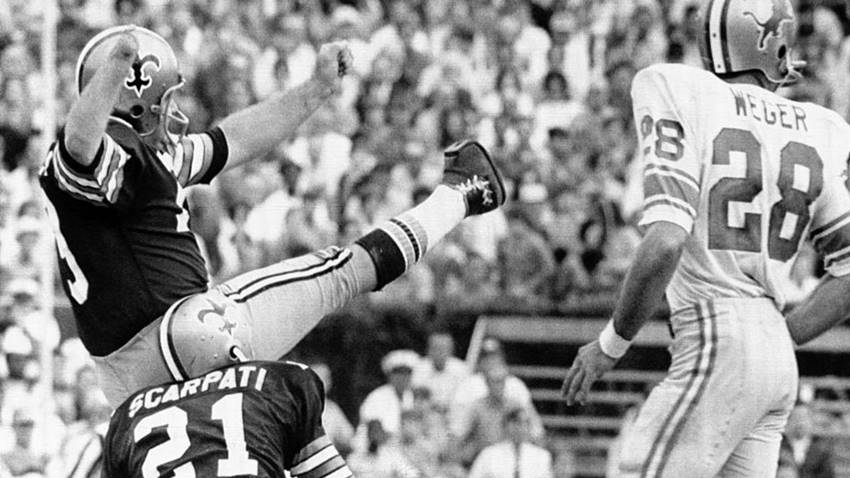 Editor’s Note: CCS’ Lenny Vangilder penned this column for FoxSportsSouthwest.com on the 40th anniversary of Tom Dempsey’s record 63-yard field goal on Nov. 8, 2010. Dempsey died Saturday from complications of coronavirus at the age of 73.

Any New Orleans native who’s at least that old can likely tell you where they were on that day. I can tell you this 5-year-old boy was supposed to be going to Tulane Stadium that afternoon to see the New Orleans Saints play the Detroit Lions. But that morning, our plans changed when my mother got sick.

So it was on a transistor radio that I heard Tom Dempsey kick his way into the NFL record books when he made a 63-yard field goal on the game’s final play to give the Saints a 19-17 victory.

Forty years later, Dempsey’s record has been matched once, but not broken.

“I really am surprised” the record hasn’t been broken, Dempsey said last week, “because you have to look at the NFL. There are so many great players. Kickers have gotten better through the years.”

Dempsey was born with only part of a right arm and without a club right foot. He didn’t recognize his kicking talents until he was a lineman at Palomar College in San Marcos, Calif., and his coach put out an open call of his teammates for someone to kick off.

Two kicks through the end zone, and Dempsey’s kicking career was born. At first, he kicked barefoot, but legendary coach Sid Gillman had a custom shoe built.

“They took pictures,” Dempsey said. “I was kicking barefoot then and they took pictures of me kicking and where I hit the ball. (An orthopedic company in San Diego) built the shoe that looked more like my foot. Sid Gillman was a very brilliant coach.”

Dempsey also played in an era that was less politically correct than now.

“Don Heinrich, our offensive coordinator, got on the headset,” recalled Dempsey, “and said, ‘Tell Stumpy we’re going to kick a long one.’ He used to call me Stumpy.”

Roberts’ club was clinging to a 16-14 lead until the Lions’ Errol Mann made an 18-yard field goal in the waning moments to give Detroit a one-point lead.

The Saints, who entered the game 1-5-1, were seemingly going to find another way to lose. They were winning the turnover battle by a staggering 6-0, taking the ball away from the Lions three times by fumble and three times on interceptions.

Mann kicked off to Al Dodd, who returned it 22 yards. The Saints ran one offensive play – a pass from Billy Kilmer to Dodd, which took the ball to the Saints 45 with two seconds left.

“I didn’t know it was 63 yards,” said Dempsey. “I didn’t know because I had one of the great holders in pro football in Joe Scarpati and I never picked my spot. He did. He told me he was going to move it back a yard … because I want you to be able to get it up past the line.”

The Saints locker room was a madhouse following the game.

“If you’re going to set a record, there’s only one town in America to set it, right here in New Orleans,” Dempsey said. “I was in the locker room and they wouldn’t let me leave because there were so many people there.

“The (New Orleans Police Department) sergeant was there and I said ‘Chief, it’s been a long day; I’m getting a little thirsty.’ He asked what I wanted. I told him I wanted some Dixie (Beer).

“He sent a couple of his guys and came back with two cases and I sat in the locker room with two policemen for a couple hours and then we went downtown. I don’t know how many places we went to, but I was smart enough to let them drive me home.”

One of Dempsey’s shoes is in the Pro Football Hall of Fame in Canton, Ohio.

“They called me up and they wanted me to send it right away,” Dempsey recalled. “I told those guys that I still have seven games to play and that I need this shoe.

“They called (then-NFL commissioner) Pete Rozelle. Pete … called me up and said, ‘Tom, why won’t you give them your shoe?’ I said I’ll give it to them after the season because I still have games to play. He said, ‘That makes sense. You tell them to go to hell Tom,’ so I did. I called him back and said I really didn’t mean it. He was just a plain nice guy.”

Canton got “a” shoe. “The” shoe, and the football, are in the Saints Hall of Fame in the Superdome. “I figured that’s where it belonged,” Dempsey said.

Dempsey was in the second class of inductees to the local hall, in 1989.

But when a franchise with two playoff victories in its first 42 years suddenly makes a magical run to the Super Bowl, and wins the NFC Championship on a field goal in overtime … well, things change.

“That was a great kick,” Dempsey said of Garrett Hartley’s 40-yard field goal to defeat the Minnesota Vikings 31-28 in the NFC title game on Jan. 24, sending the Saints to Super Bowl XLIV. “The kicks that he had getting into the Super Bowl and in the Super Bowl were great.”

At his wife’s suggestion, Dempsey watched the Super Bowl at “my favorite bar in the world,” The Old Absinthe House on Bourbon Street. “That was a hangout of the old players,” he said. “She suggested we go to the Old Absinthe House because we both liked to and still like to go there a lot. So, we watched it there and we were upstairs.”

And as a result, Dempsey and his wife had a front-row seat for the city’s postgame euphoria.

“It was absolutely phenomenal,” he said. “I walked out once I knew it was over with and watched the people charging down Bourbon Street. It was phenomenal. I was happy for them.”

When Dempsey made his famous kick, it was more than a record-setting kick. He shattered the old mark of 56 yards by Bert Rechichar of the Baltimore Colts in 1953.

Jason Elam tied the mark in 1998. The closest anyone has come to breaking the mark was three years ago, when Sebastian Janikowski of the Oakland Raiders had more than enough distance on a 64-yard attempt against the Houston Texans, but it hit the upright.

Who does Dempsey think has the best chance to break the record?

“I won’t predict anybody, but I’ll be one of the first to call him and congratulate him,” he said. “When Jason Elam tied my record, I must have had 30 sportswriters around the country wanting to badmouth him because he kicked it in Denver. I said guys don’t worry where it is; you respect the effort that it took. I do feel that way.

“If I had my choice of who kicks it, it would be Garrett Hartley to keep the record in New Orleans.”