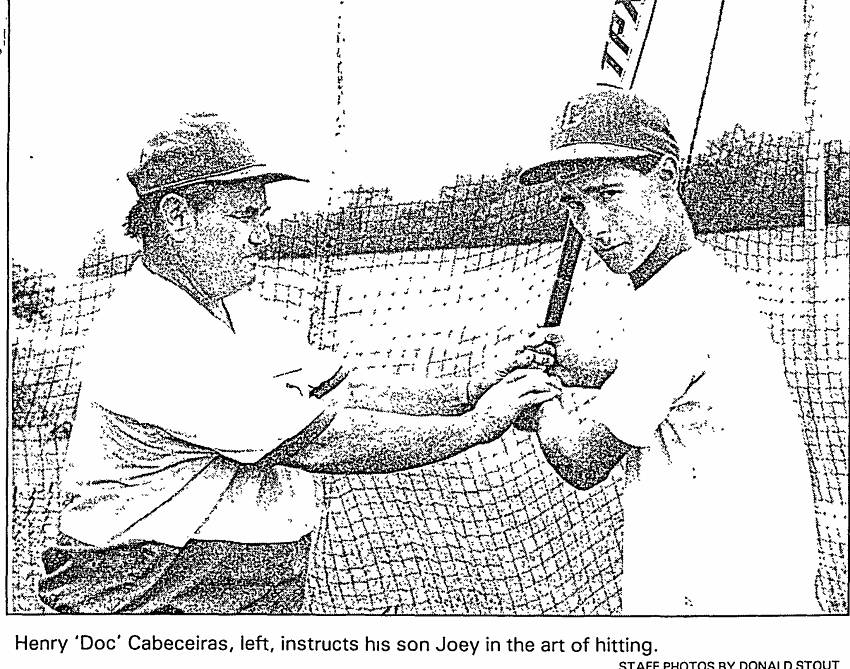 It was hard to open the sports pages of the Times-Picayune and States-Item during the spring and summers of the 1970s, 1980s and 1990s without seeing the name “Cabeceiras” in one or more baseball stories. That’s because the Cabeceiras family’s father and five sons were making headlines in all levels of local baseball leagues, from youth teams through college. Two of the brothers’ sons would follow in their footsteps.

Henry “Doc” Cabeceiras Jr.’s day job was an obstetrician/gynecologist, while his nights and weekends were spent coaching his sons’ teams or watching them play all across the city. His ball-playing sons consisted of the eldest Steven, with Jimmy two years younger, followed by Larry, who was a year younger than Jimmy. Henry III was born eight years after Larry, and Joey followed Henry III ten years later.

I caught up with Larry, Joey and Miles (Larry’s son) this past week, when they shared numerous family and baseball stories that became part of the Cabeceiras history and lore over the years. Despite their difference in ages, it was obvious strong relationships had developed within the family, much of which was centered around the sport.

The Cabeceiras baseball legacy started with Doc, who was originally from Belmont, Massachusetts. He began coaching youth baseball while in college. One of his earliest sports-related claims to fame was convincing future major-leaguer Wilbur Wood to switch from first baseman to pitcher when he was 11 years old. He wound up teaching Wood how to throw a knuckleball, the pitch he became famous for in the big leagues.

The family eventually moved to Jefferson Parish, where one of the early successes of the oldest three brothers was as members of a Babe Ruth team, coached by their father. The team won the Jefferson Parish Recreational Department (JPRD) East championship. 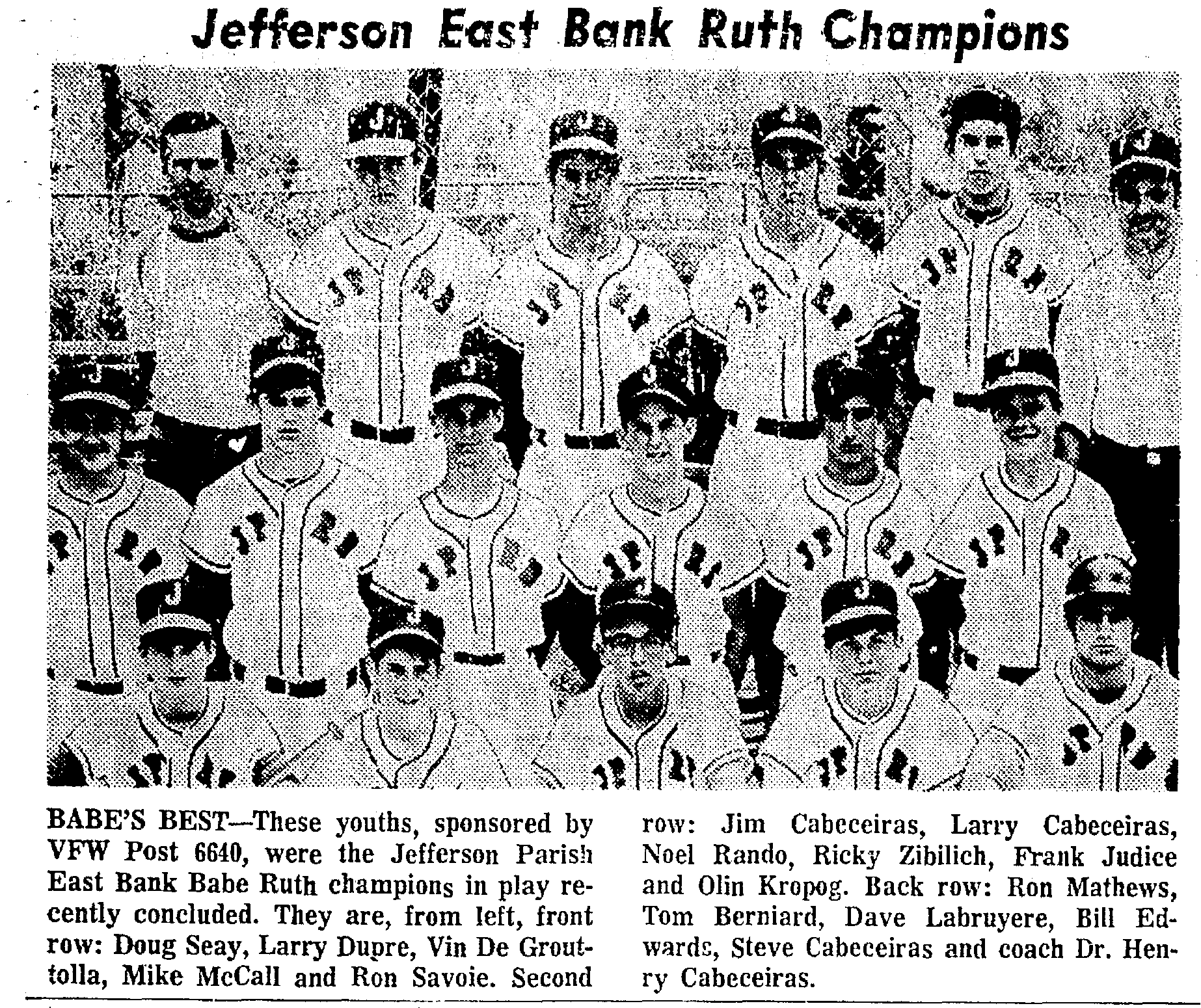 When his sons became old enough to play American Legion baseball in the early 1970s, Doc took the initiative to form an independent team for Jefferson Post 267, to allow players from the smaller high schools in the city to have a team to play for in the summers. Each of the other Legion teams in the district had a single feeder school. Shamrock Construction later became the sponsor and within three years, the team captured its first Second District title. The Times-Picayune referred to Doc as the “nation’s only obstetrician-gynecologist-coach.”

The Cabeceiras boys were among the most popular in their neighborhood, because Doc built them a batting cage in the family’s back yard. He constructed a wooden frame for the cage and enclosed it with fisherman’s nets. Baseballs were thrown by one of the early pitching machines Doc bought. Larry said he remembers positioning his then-four-year-old brother Joey on a high-chair to load the balls into the machine, as Larry took batting practice.

Larry’s Tulane teammates would frequently use it since the university did not have one of its own at the time. The brothers joked that even players from opposing teams would let themselves in through the backyard gate to get in some swings.

The five brothers weren’t just regular members of their respective teams—they were standouts on their teams and in their leagues, including numerous all-district, all-state, and all-tournament honors. They all played baseball at the collegiate level.

Stephen was a hard-throwing pitcher known for his scorching fastball. While Larry, who played catcher, says his brother was never measured with a radar gun, he firmly believes Steven was capable of throwing in the mid-90s. Larry recalled his fastball was one of those “you could hear.”

Joey remembered that legendary baseball coach Rags Scheuermann once called Larry the fastest pitcher he had ever seen. Steven was a two-time all-district player at Sam Barthe High School and played briefly for UNO and Delgado. An arm injury cut his college career short.

Jim was an all-district selection while playing for Sam Barthe and was named to the All-Riverside League team. After transferring to Ridgewood High School, the infielder was honored as MVP of the school’s baseball team. He went on to start for four years (1975-1978) with Southeastern Louisiana, including an appearance in the Division II World Series in 1975.

Larry started out at Barthe and later transferred to Riverside High School, where he was a two-time all-state catcher. Among Larry’s honors were MVP of the American Legion Second District in 1973, Athlete of the Year at Riverside in 1974 when he lettered in four sports, MVP of the District 5-A prep league, and the state’s Class A Most Outstanding Player in 1975 when Riverside won the state championship. 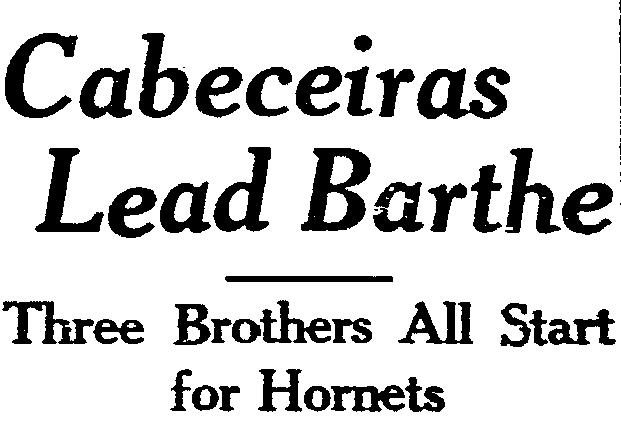 Larry played four seasons with Tulane University (1976-1979) as an outfielder and designated hitter. He was named to the Metro Conference all-tournament team in 1977 and was a co-captain for the Green Wave in 1978.

Larry said he was offered a chance in 1979 to sign as a non-drafted free agent with the California Angels, playing with their Visalia affiliate. With a pending marriage and a good job offer from Union Carbide in hand, he passed on the baseball opportunity because there would have been little money involved if he signed. He says now if he could do it over again, he would at least try to see if he could make it in pro baseball.

Named after his father, Henry III was eight years younger than Larry, but the athletic genes continued to be passed on. He was an All-District player for John Curtis Christian High School from 1981 to 1983. In his junior season, Henry dominated District 12 AA with his arm and his bat, leading in batting average and ERA. Curtis won the State AA baseball title, with Henry tossing a three-hitter and a five-hitter during the playoff run. In his senior season, he threw a no-hitter with 15 strikeouts.

Henry played briefly with Southeastern Louisiana in 1984 but an arm injury curtailed the rest of his college baseball career.

Joey recalled a game in which he played with his older brother Henry in the Mel Ott semi-pro league. Joey was only 16 years old, playing under his brother Jim’s name. Joey wound up scoring the winning run from third base, when he and Henry (coaching third base) pulled off a trick play on the opposing pitcher. Joey remembered a big brawl ensuing between the two teams over the play.

The Times-Picayune once wrote a headline about youngest brother Joey, “Given his family tree, Joey Cabeceiras was bound to be a star.” He would indeed extend the Cabeceiras baseball legacy.

Joey’s 15-year-old JPRD East team finished third in the Babe Ruth World Series in 1990, with Joey making the all-tournament team. He was named MVP in the state tournament. He went on to become a four-year starter as a pitcher and infielder for Jesuit High School during 1990-1993, making the All-District and All-Metro teams for three years. He was District MVP in 1991 and 1992 and also received All-State honors in those years.

Joey was a four-year starter for UNO from 1994-1997. He won seven games as a freshman, the most by a first-year UNO player since 1985. In 1995, he had two key relief appearances for the New Orleans Boosters who won the national title in the All-American tournament in Johnstown, PA. He was named to the All-Louisiana College team in 1996.

Joey was the only one of the five brothers to continue with baseball as a career. He coached at Newman High School and De La Salle High School before embarking on a business venture involving baseball.

Using his deep playing experience at youth, high school, and college levels and his years as a high school coach, Joey founded Big Easy Sportsflex in 2009 as a facility with all the best amenities, where players from all schools and teams in the area could train and develop individual baseball skills. The idea for his facility stemmed from his father’s batting cage in their back yard– a place where ballplayers would come from anywhere to train, learn, and mingle with other players.

Not wanting to be outdone by older their brothers Steven, Jim, and Larry, sisters Jeanne and Susie were All-State softball players for Ridgewood High School.

Larry’s son Miles grew up in Raleigh, North Carolina, where he played high school baseball, earning All-State honors one season. When his family moved to New Orleans prior to his senior year, he enrolled at De La Salle high school, where his uncle Joey was the baseball coach. Miles was an All-District player in American Legion action and was selected to play in the Louisiana High School Coaches Association All-Star game. A catcher like his father, he went on to play two seasons at UNO (2004-2005), followed by a season at Ole Miss in 2006.

One of Miles’s favorite stories involved smacking a double off the wall against his Uncle Joey in a UNO alumni game between former UNO players and the current squad. Joey, who took a turn at pitching for the alumni, told Miles before the game, if they faced each other, he would get a fastball on the first pitch. When Miles came up to bat against Joey, he didn’t get the take sign from his coach (as he often did). Consequently, he knew what pitch was coming and made the best of his at-bat.

Joey’s son Jake played two seasons of varsity baseball for Rummel High School. Normally an infielder, he threw a no-hitter for the Raiders in 2021. He was selected to the 2021 Perfect Game Pre-Season All-America and All-Region teams. Jake played for Loyola University in 2022 and plans to join Baton Rouge Community College next season.

Spanning multiple generations and decades, the Cabeceiras family ranks high among the most accomplished baseball families from the New Orleans area. Doc Cabeceiras is credited by his sons for providing the environment and coaching they needed at a young age to develop and succeed. Spearheaded by the father, the sport linked family members across the decades, the results for which the family is especially grateful.