Flashback: 1974 Rummel-based baseball teams ranked among the best ever in New Orleans 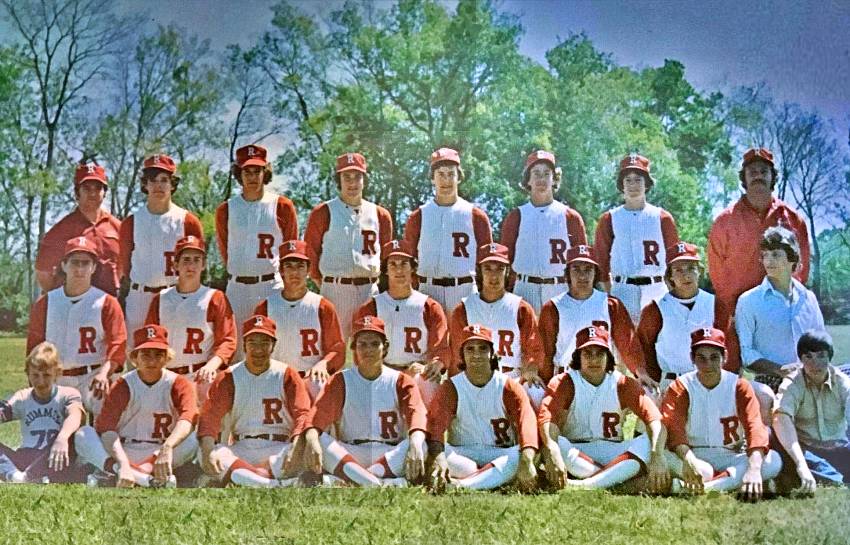 In a city with a long, rich tradition of high school and American Legion baseball dating back to the 1920s, identifying the New Orleans area’s best teams of all time would be a difficult undertaking.

Yet on two occasions several years ago, the 1974 Archbishop Rummel High School Raiders and the Rummel-based Schaff Brothers American Legion team were designated among the all-time best in the city. When considering the combined achievements of both teams, largely consisting of the same players, they are arguably the best ever baseball team in the city.

In 2003, the Times-Picayune produced its list of all-time Top 10 high school teams in the New Orleans area which included the 1974 Rummel High School squad. The Raiders’ case was based on the 22-2 record, including 19 consecutive wins on their way to a state championship.

In 2009, Ken Trahan, the current Crescent City Sports co-owner who served as president of NewOrleans.com/Sports at that time, convened a comprehensive panel of local baseball coaches, sportswriters, historians, and former players to rank the best American Legion teams in New Orleans history. Rummel’s 1974 Schaff Brothers team and the 1980 Jesuit-based Odeco Drillers team were tied for first.

The rationale for naming Schaff was based on a 30-4 record, including 28 consecutive wins, as they finished tied for third in the American Legion World Series.

There will be no argument from Larry Schneider as to which team was the all-time best. He was the coach for both the prep and Legion teams in 1974. Forty-eight years later, Schneider remains steadfast about how good his teams were.

“They never gave up,” Schneider said. “They played hard all the time. It was hard to go undefeated in prep district play and to run off a long string of wins in Legion, but we were consistent. The players believed in themselves and they enjoyed the game.”

The Raiders’ prep team was used to winning.

After winning both rounds of district play in 1974 with duplicate 7-0 records, Rummel waltzed through the district playoffs with a one-hitter by senior Rick Zibilich and a five-hitter by sophomore Kenny Francingues.

The duo had shouldered the pitching chores all season and saved their best for the state playoffs. Francingues hurled a two-hitter over Baton Rouge Tara in the semis, while Zibilich countered with a no-hitter, including 14 strikeouts, over Baton Rouge Broadmoor in the finals.

Rummel finished 22-2 for the season, including 19 consecutive wins. Schneider was named Coach of the Year for the Times-Picayune All-City team, while Zibilich was named the MVP. Catcher Dom Giambrone and infielder Jim Kropog also received All-City honors. Francinges and outfielder Steve Foster joined them on the All-District team. Zibilich was also named to the Class 4A All-State team. 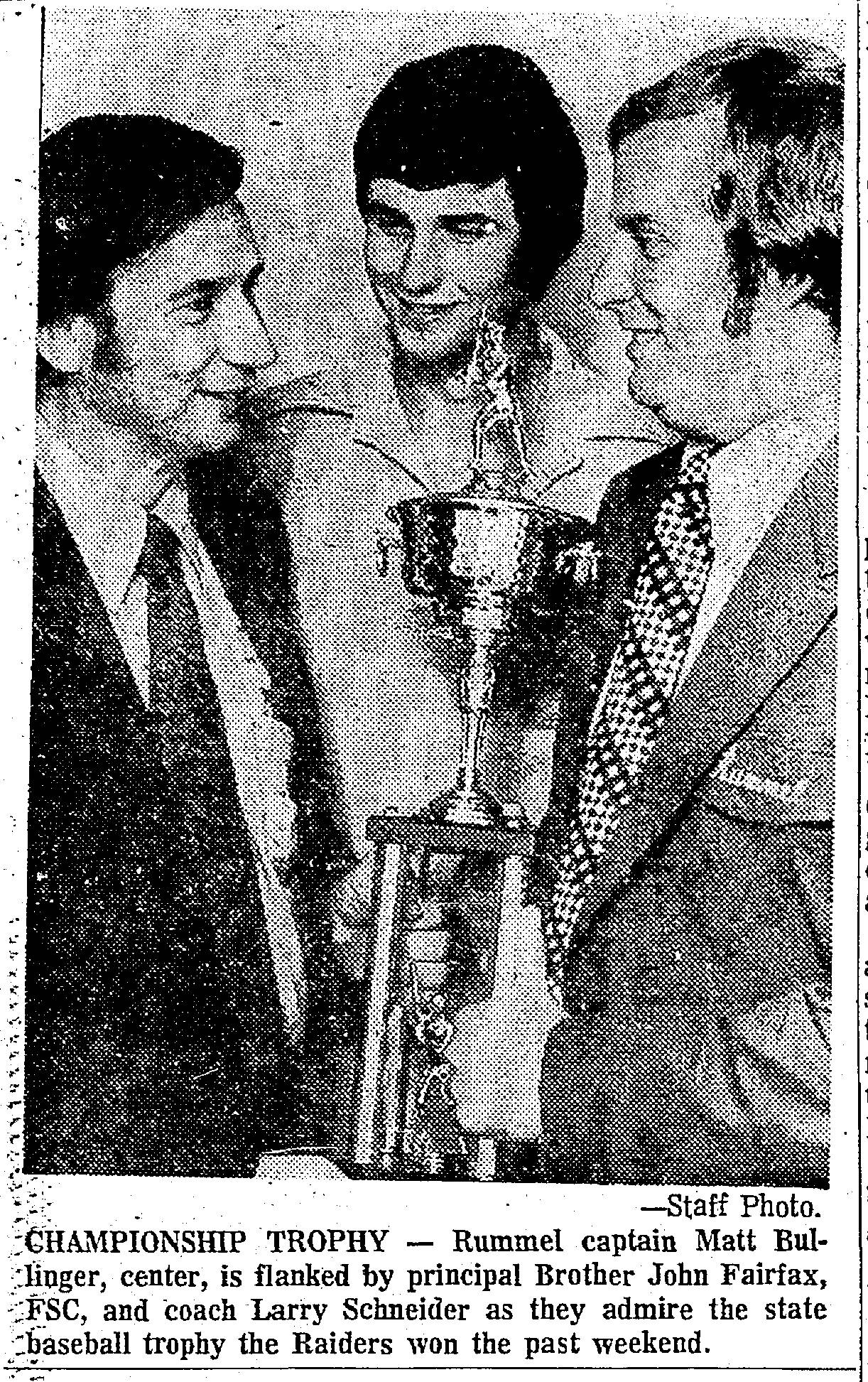 Schaff, who had finished with a 16-1 record in 1973, was the favorite to repeat as Second District champion, according to the Times-Picayune. Additionally, there was a suggestion Schaff could even advance far into the national playoffs.

DeGrouttola, who had just completed his freshman season pitching for Tulane, took Francingues’ place in the pitching rotation during Legion district play. The 15-year-old Francingues was still eligible for Babe Ruth league competition.

Looking back, Francingues talks about an agreement between his Babe Ruth coaches and Schneider that Babe Ruth participation would take precedence in the event of scheduling conflicts. He wound up pitching sparingly for Schaff during district competition.

Schaff rebounded when Zibilich tossed a no-hitter against East Jefferson-anchored Metairie Post 350, and Francingues worked in a rare start against Bayou Rigging, producing 10 strikeouts. With Chalmette winning the first round, Schaff finished tied for second with Tasty, posting a 7-2 record. Schaff proceeded to sweep its opponents in the second round, including four-hit and five-hit performances by DeGrouttola.

Schaff closed out district play with a 17-2 record, including 14 straight wins.

Zibilich and DeGrouttola were outstanding during Second District competition. They were practically an unbeatable one-two punch. Zibilich went 6-0 with a 0.93 ERA, while DeGrouttola finished with a 7-1 record and 1.52 ERA. Zibilich, who played shortstop when not pitching, also captured the district batting title with a .423 average.

In the Second District championship series, Schaff swept Chalmette in two games to advance to the South Louisiana Regional.

Schaff squeezed by Brother Martin-based DeViney’s, 5-4 in 10 innings, in the first game of the South Louisiana tournament.

DeViney’s coach, Tom Schwaner, who had been Rummel’s coach before Schneider, led his squad to a 16-3 record as First District champion, recently recalled that he had “tried every trick in the book just to stay even with them.” He added, “I remember being mentally spent after that game They were great on both sides, hitting and pitching, and they just had more weapons than us.”

After defeating familiar foe Chalmette, 9-1, on Francingues’ four-hitter, Schaff turned its attention to a seasoned De La Salle-based Melville Equipment team. Zibilich shut down Melville with 18 strikeouts in a Schaff 7-0 win that left them the only undefeated team in the winner’s bracket. Melville coach Gerry Burrage recently recalled that Zibilich had great command, with a good curve. Melville worked its way back to the championship round, needing two wins to take the title.

But Schaff claimed the regional title when DeGrouttola went the distance in an 11-inning contest, 5-4. Right fielder Gus Malespin was the hero of the day. In the top of the 11th, Melville put a runner at second base with two outs. Melville’s Rick O’Krepki lined a single to right that Malespin fielded and threw the runner out at the plate. Malespin then led off the bottom of the 11th with a walk and eventually scored the winning run on Don Albares’ single.

Burrage vividly remembers another good play in the championship game.

“We had a chance to go ahead earlier, but their outfielder Judice makes a miraculous back-handed catch to end our rally,” Burrage said.

Schaff’s record went to 22-2 at that point. Times-Picayune sportswriter John Joly suggested that the Rummel prep and Legion teams were on par with the best local teams over the past 10-12 years.

Schaff faced North Louisiana champion New Iberia in the state finals. Schaff fought back from deficits twice to forge a 15-9 win in the first game, and then captured the title with a 6-3 victory on DeGrouttola’s four-hitter. Schneider said he and the team felt a measure of revenge after having been defeated by New Iberia in the state prep finals the year before.

Schaff advanced to the Mid-South Region 4 tournament in Memphis. Schneider remembers telling his players that they were well-prepared to compete in the next levels of tournament play, because they had already faced tough competition in the First and Second Districts in New Orleans, against teams like DeViney’s, Chalmette, Tasty Bread, and Melville Equipment.

The Schaff players took Schneider’s words to heart, as they swept all their opponents in the Mid-South Regional, including Fort Smith in the championship game.

One of the memorable contests in that tournament was a 12-inning affair against Brazosport, Texas, Schaff’s second opponent of the tournament.

The outcome was indicative of Schaff’s clutch capabilities, as Zibilich pitched the entire game, striking out 21.

With the game tied in the bottom of the 11th inning, right fielder Malespin saved the game when he made a running shoestring catch with runners on first and third. Giambrone and team captain Matt Bullinger drove in 12th-inning runs to clinch the dramatic victory, 6-4.

“When you win a game like that, you just have to get a lift.” Schneider said. “It was about the toughest game we played all year, but the kids never stopped hanging in there.”

Schaff earned its first entry in the American Legion World Series which was being played in Roseburg, Oregon. The mid-season predictions that the Rummel-based team could go far in the postseason had come true.

Schaff defeated Bristol, Connecticut, with five runs in the top of the 9th inning for a 7-4 win in the first game. However, the victory did not come without great cost to the team. Catcher Giambrone, who had been named the Mid-South Region 4 tournament MVP, broke his hand in the game. Zibilich followed with a four-hitter to defeat Oswego, Oregon, 3-0.

Puerto Rico apparently took the wind out of their sails, as Schaff fell apart in a 13-1 loss and elimination by Cheverly, Maryland.

In recent discussions with Coach Schneider and Francingues, both echoed sentiments that playing without Giambrone after his injury in the first game made a significant difference in their final outcome in the Series.

“Without a doubt, we missed him at some crucial times during the World Series,” Schneider said.

Schaff finished the season with a 30-4 record, including 27 consecutive wins.

Francingues, who has coached baseball for 38 years, characterized the makeup of those Rummel teams.

“We had talent on the field and on the bench,” Francingues said. “We had depth in pitching. If we could score at least four to five runs a game, we had a good chance of winning because our pitching staff was pretty stingy in giving up runs. I was the luckiest man in the world playing for Rummel with the type of hitting team we had. Our captain Matt Bullinger was the best defensive first baseman I ever played with, and that includes teammates I had later in the pros, like future MLB all-star Kent Hrbek.”

Francingues has high praise for Schneider.

“He was a really good game coach,” Francingues said. “He let us play. For example, he let us call our own pitches. Coach was a stickler for fundamentals in fielding and hitting. We were well-prepared when the season started.”

Another testament to being ranked among the best local teams ever was the number of players that progressed to collegiate ranks. Zibilich played for Ole Miss, DeGrouttola and Francingues for Tulane, Bullinger for USL, Giambrone and Judice for LSU, Wayne Golden and Gus Malespin for SLU, Jimmy Kropog for UNO, and Tommy Casse for Nicholls State. Francingues, Bullinger, and Malespin went on to play in the pros. DeGrouttola was drafted but did not sign.

Two years later, Schaff made a return trip to the American Legion World Series in Manchester, New Hampshire. In their fourth game, they were eliminated by the Arlington Heights team from Des Plaines, Illinois. Malespin was named American Legion Player of the Year for his performance in the tournament.