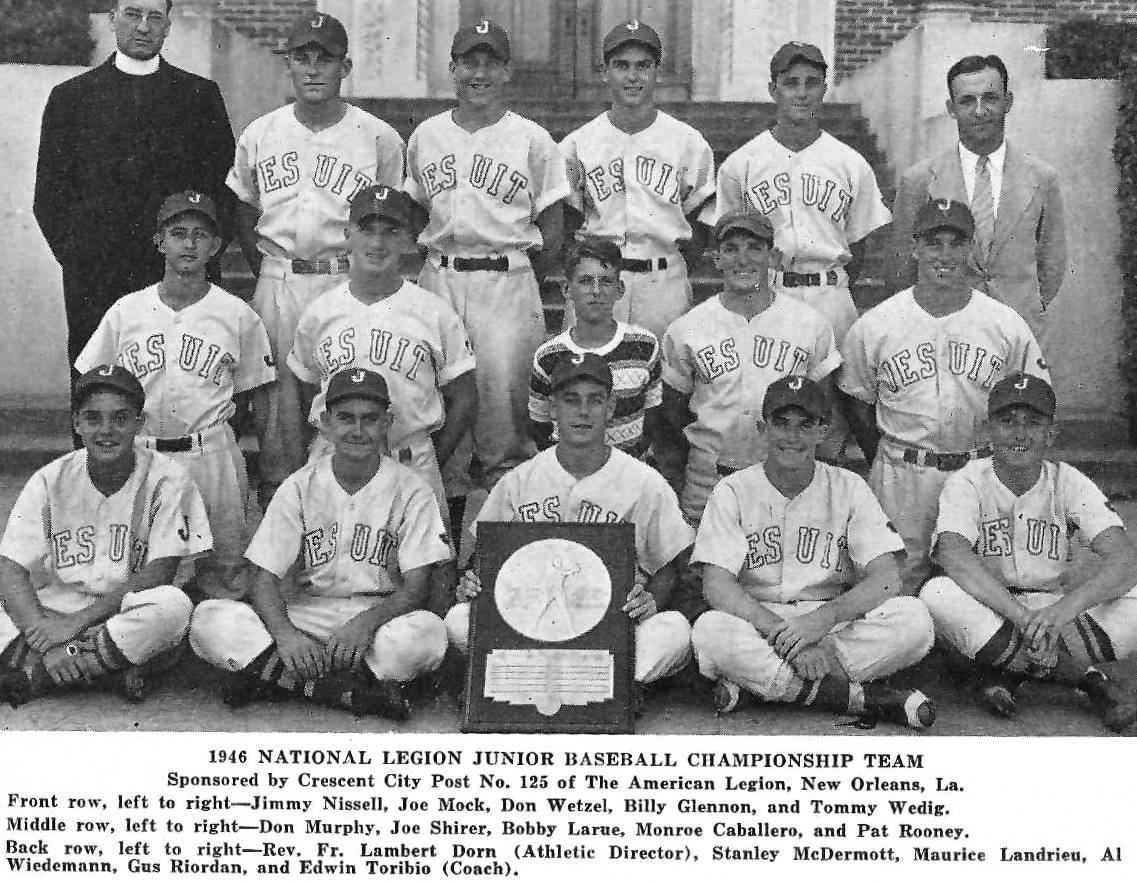 The Jesuit-based American Legion baseball program was no stranger to post-season playoffs in 1946. According to the Times Picayune, the Blue Jays had won Legion regional tournaments in 13 of the last 17 years and going as far as the finals of the Legion World Series in 1934. Perhaps fueled by their past successes, Jesuit overcame several obstacles during the post-season to claim their first World Series title.

Jesuit High School had already repeated as the state champion during the school year, earning the label “Yanks of the Prep League.” They were led by first baseman Tookie Gilbert and pitcher Hugh Oser, who completed his second season without a loss.

Jesuit’s Legion coach Eddie Toribio was faced with two factors that could have worked against him in fielding the team for summer Legion play, but he was ultimately able to overcome them.

Absent from the Legion roster were their two best players from the prep squad: Gilbert and Oser. Gilbert chose to play in the Esquire all-star game in Chicago instead, while Oser was too old for Legion participation. Other prep team starters who didn’t play for the Legion entry were catcher Jack Golden, second baseman Pete Tusa, and third baseman Rene Kronlage. Gilbert, Oser, and Golden had been named to the city’s All-Prep team, with Gilbert being tabbed the most valuable player. One of the consequences of these unavailable players was their replacements tended to be younger players with less experience. Toribio wound up with a roster whose average age was 16 years old.

Through a unique set of circumstances Jesuit was crowned the city’s First District champs without ever playing a game against district competition. That situation came about because seven teams withdrew from the league after it was decided by local American Legion officials that a second round of games would be limited to the top four teams competing in a double-elimination playoff. Their rationale was there wouldn’t be enough time to conduct a full second round. In the past there had been two full rounds of play in which all teams competed before the playoffs. The decision upset the sponsors of the teams, who maintained it didn’t provide their players an opportunity for a full season of competition. With Jesuit being the only team who didn’t withdraw, American Legion officials cancelled the regular season and declared them the First District champions.

As a result, the first time the Jesuit team, with its newly overhauled roster, competed in Legion play was during the playoffs against Second District champion Norco. However, undaunted by their lack of prior regular season games, Jesuit handled Norco easily in two games, 17-0 and 14-2, to earn the right to advance to sectional play against Baton Rouge.

Baton Rouge delivered a blow to Jesuit in the first game by coming from behind in the ninth inning to win, 4-3, but Jesuit rebounded in the second game to win behind Pat Rooney’s four-hitter, 6-2. Pitcher Gus Riordan handcuffed Baton Rouge in the rubber game to lead Jesuit to a 9-0 victory and the South Louisiana championship.

Next up for the Blue Jays was Shreveport, who had defeated Alexandria for the North Louisiana title. One of their wins included a 13-inning, 26 strikeout effort by Shreveport pitcher Gene Stevens. Jesuit took the first game in Shreveport, 7-0, battering Stevens for 11 hits. Rooney recorded his third consecutive shutout in the playoffs. Before 2,918 fans in Pelican Stadium in the second game, Jesuit defeated Shreveport, 7-1, to win the state crown. Third baseman Al Weidemann spearheaded the Jays’ offense with two hits, including a 352-foot home run.

The victories over Shreveport earned the Blue Jays an entry in the national regional tournament which was played in New Orleans. Their opponents were state champions from Mississippi, Texas, and New Mexico. The Times-Picayune observed about Toribio’s charges, who were without their two best players, “The Jays banded themselves to get the maximum amount of good from teamwork. Coach Toribio came up with one of the best-balanced teams ever seen from the preps. From top to bottom the boys play heads-up, spirited ball, and with two fine pitchers and the will to pull together, they are hard for any team of 17-year-olds and under to beat.” It was the second straight year Jesuit had advanced to this regional in the post-season.

Jesuit spanked Houston in their first game, 19-1, before 6,500 fans at Pelican Stadium and then went on to defeat a tough Little Rock squad twice, 4-2 and 10-8 to win the regional title. Shortstop Don Wetzel collected seven hits in 16 at-bats, scored five runs, and handled 21 chances without an error to help lead the Blue Jays. Their three-game sweep earned them a spot in the national sectional tournament in Gastonia, North Carolina.

Jesuit defeated Kanapolis, North Carolina and Thomasville, Georgia twice to win the sectional. Once again, Jesuit’s pitching came through, with Rooney hurling a sterling three-hitter in the deciding game. It was the seventh time since 1929 that the Blue Jays won the sectional.

Next advancing to the American Legion World Series in Charleston, South Carolina, their opponents were Trenton, Los Angeles, and Cincinnati. Jesuit had last appeared in the World Series in 1934, when they lost to Cumberland, Maryland. The 1946 Blue Jays suffered their first loss in 12 games to Los Angeles, who held them to only two hits in a 6-0 loss.

But Jesuit fought back in the loser’s bracket to defeat Cincinnati (7-2), Los Angeles (5-3), and Trenton twice (15-3 and 3-1) to claim the World Series title. Jays captain Wetzel and Rooney were named to the all-tournament team, with Wetzel also receiving the tournament’s sportsmanship award. Wetzel was the second best hitter in the tournament, getting nine hits in 20 trips to the plate for a .450 clip, while Jesuit’s Joe Mock had the fourth-best average with .412.

As a testament to the talent of the Jesuit prep/Legion team members, a majority eventually went on to higher levels of baseball. Gilbert played briefly in the major leagues; Oser, Wetzel, Tusa, Riordan, Golden, Rooney, and Murphy had brief careers in the minor leagues; and Landrieu, Caballero, Nissel, Glennon, Wedig, and McDermott played collegiately.

In addition to the American Legion World Series title in 1946, the Blue Jays took home national championships in 1960 and 2012.