Female kickers making their mark on the North Shore 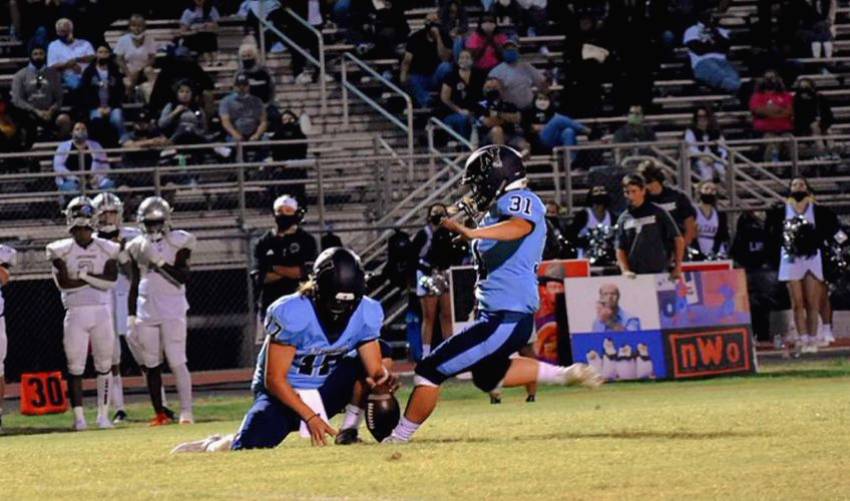 No one can really explain it.

“It might be something in the water,” Northshore High School football coach Bobby Sanders said kiddingly.

It is kind of crazy that four high schools within 25 miles of one another in St. Tammany Parish all have female kickers.

Decker and fellow junior Belle Airey of Northshore will be on opposite sidelines for a District 6-5A game Friday night at Northshore.

Barely five miles away, Megan Gettys, the senior trailblazer of the group, will be kicking for Lakeshore in its District 9-4A game at Salmen, featuring Neveah Smith as their kicker.

The kickers have plenty in common other than the obvious – being girls playing the same position in what until recently has always been an exclusively boys sport.

Each has a soccer background that helped prepare them. Each had a kicking mentor who saw as much football potential as futbol potential in them. Each found coaches who had the good sense to see them as kickers and not girl kickers.

And each has shown the determination necessary to succeed at something few like them have ever been given the opportunity to attempt.

Gettys said her first day on the Lakeshore football team “definitely had a weird vibe about it.”

She tried out as a sophomore and opened eyes of her future teammates when she made her first attempt – from 45 yards.

“They were freaked out,” she recalled. “Dang, was that a girl?”

Gettys, whose soccer nickname of “Megatron” has followed her to the football team, is now in her third season as the varsity kicker.

She has made four of five field goals and all but two of her extra points this season.

Gettys was preceded as Lakeshore’s kicker by her brother Jack, who has taught her the technique that he used to routinely put kickoffs into the end zone.

“The coaches trust me,” she said. “We do kickoffs like they would with any guy doing it.”

Airey is the only one of the three whose a goal-keeper, meaning her soccer experience translates better to place-kicking than does Decker’s and Gettys’ as field players.

Her role requires kicks focused mainly on distance and height whereas field players are focused more on keeping the ball low.

Sanders said Airey is “definitely one of the hardest workers on the team” and has attended “all kinds of kicking camps.”

But it was one-on-one instruction that her parents arranged for her to get three or four times a year from former Ridgewood Prep kicker Jonathan Ruffin beginning when she was in 7th grade that accelerated her development.

Ruffin started working as a kicking instructor with Prokicker.com when he was a sophomore kicker at the University of Cincinnati.

He added that he was struck most by her “drive.”

“A lot of kickers kick as an afterthought,” Ruffin said, “but she’s much more focused and that’s why she has been successful and her technique is so good. She’s gotten so much stronger.”

Airey joined Northshore’s power-lifting team to strengthen her legs and she finished in the Top 10 in the state Class 5A 136-148 pound weight class last season.

“With kicking it’s important to stay flexible and sometimes the power-lifting can tighten you up and you lose that flexibility,” Ruffin said, “but she’s done a good job of staying flexible so she has both – she’s flexible and she has some power from the lifting.”

Sanders said the possibility of having a female kicker “never occurred to me” until Airey showed up.

Airey, who said she has “played soccer my whole life,” made her varsity football debut in the season opener last season against Lakeshore and Gettys. Northshore had lost its last 11 games and Lakeshore had won its last 32 regular-season games.

Sanders said Airey “drilled everything,” making all four of her extra-point attempts as well as her only field-goal attempt, from 33 yards, to provide the winning margin in a 31-28 victory. (By the way Gettys made all four of her PATs.)

“She was very calm,” Sanders said of Airey. “Right there I saw she could handle it like a veteran kicker.”

Decker and Airey play on the same team in the Slidell Youth Soccer Club, and their teams faced each other in football when they were freshmen.

But they will compete against each other in a varsity football game for the first time Friday night.

They were scheduled to play against each other last season, but “right before the (Northshore-Slidell) game,” Decker had to quarantine because of contact tracing.

“Our whole soccer team is going to be at the game watching,” Decker said. “I never imagined kicking for a football team in high school. I never thought that would be a thing.”

But it is now – thanks in large part to Matthew Riley, a friend of Decker’s who preceded her as Slidell’s kicker.

“In junior high I used to play soccer with friends and just kick footballs around just having fun,” Decker said. “Matthew noticed that I was taking an interest and that I was good at kicking.”

He encouraged her to try out and “he basically taught me everything I know about kicking,” Decker said.

She began her sophomore season on the varsity as the backup to Riley. At mid-season he was sidelined for the remainder of the season by a hip injury.

Her first kick was an extra point against Mandeville.

“I was super nervous,” she said.

Then she made the kick and “I was super happy.”

Decker has made 15 of 17 PATs and two of three field goals, the longest being a 32-yarder, this season. Scobel said he’s “pretty confident” in her from 35 yards or so.

Scobel didn’t plan on having Decker handle kickoffs, but he lost his kickoff specialist when he didn’t return after evacuating for Hurricane Ida.

The coach said Decker “can’t kick it deep” so “we’ve been very creative.”

“She can kick it high so she has been really good at placing it where we want it and she has learned how to squib and onside,” Scobel said. “She’s really becoming a pretty good asset.”

Scobel was a kicker at ArchbishopShaw High School and Pearl RiverCommunity College before earning a scholarship as a punter and kicker at Northwestern State.

“At first when she was kicking I would give her a hard time to try and make her focus,” Scobel said. “I tried to distract her as we were doing drills. I would stand right next to her and wave my hand or run in front of her, do something as she was about to kick.

“And the kids kind of picked up on it and they would do it on the sideline. While she’s kicking they’re yelling at her, trying to distract her, and they’ve got a clap they do for her at practice when she makes it.”

Scobel tells Decker that if she kicks off to the wrong person she might have to be the one to make the tackle.

He said she reacts by shedding her “meek and humble” demeanor and reminds him that she got a red card last soccer season for an overly physical hit.

“In soccer she plays tough,” he said. “We joke with her and say she might have to go get a red card.”

Gettys said teammates on her club soccer team in Gulfport, Mississippi have told her that they wanted to try their foot at kicking, but were denied by the football coaches.

“That’s messed up,” Gettys said. “I want other girls to look at what I’ve done and try to pursue it.”

Perhaps the inspiration provided by these four will extend beyond the North Shore to other pockets of the metro area.

“Maybe they just haven’t had that girl go out yet,” Scobel said. “I’m sure in time it’ll happen.”