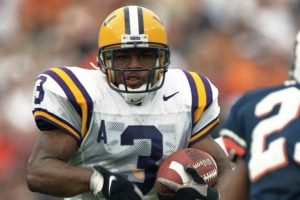 A former Carencro High and LSU great, Faulk is in his second year as the LSU Football Director of Player Development. Faulk remains the leading rusher in LSU history and is a three-time Super Bowl champion from his outstanding career with the New England Patriots. Faulk holds a total of 12 school records. From 1995-98, Faulk amassed 4,556 yards rushing and 46 touchdowns. Faulk works with football student-athletes on academic direction, social development and overall quality of life.

A former New Orleans Saint from 1993-96, McCleskey also played for the Arizona Cardinals. He is in his second season as secondary coach at Tulane. McCleskey was a star player at Tennessee and is a member of the Knoxville Hall of Fame. His son, Jalen, is a starting receiver for the Green Wave.

A former New Orleans Saint from 1983-89, Korte played in 83 games for the Saints and was part of the first winning season and first playoff appearance in team history in 1987. He was a consensus All-American at the University of Arkansas and he was inducted into the Arkansas Hall of Honor and he is on the All-Century team at Arkansas. He hosts “Fans First Take” prior to all New Orleans Saints games on WWL Radio.

Duncan, who grew up in Memphis and played four years of college basketball at Memphis State (now the University of Memphis) alongside future NBA star Penny Hardaway, came to UNO this past summer after serving as the deputy athletic director for external affairs at Northeastern University in Boston. He has held leadership roles at both NCAA Division I and Division II institutions, including serving as director of athletics on two different occasions.

In his 20th year as head coach at St. Charles Catholic and his 50th year in coaching, Monica has guided the Comets to a state championship and three other state championship game appearances. He has won 272 games, ninth most in Louisiana history and won state titles at Riverside Academy and at Lutcher. He also served previously as the head coach at Jesuit.