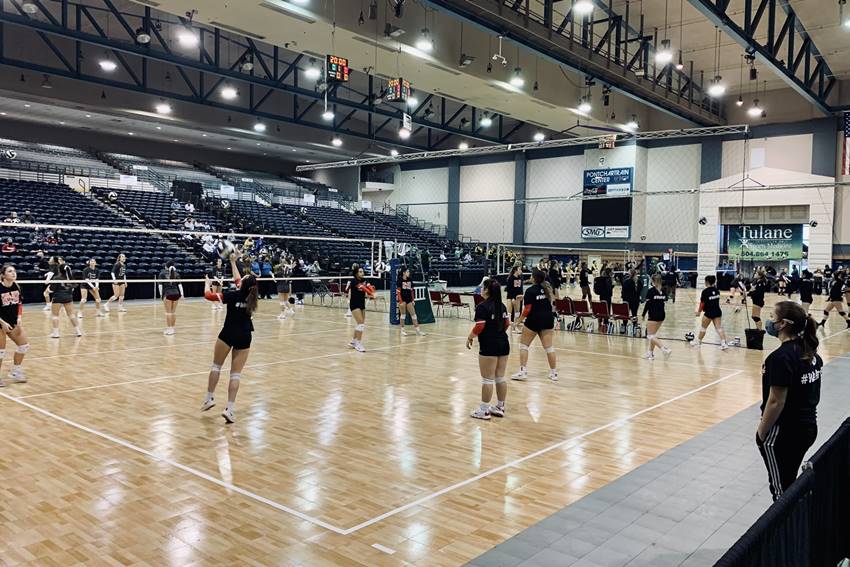 KENNER – Virtually nothing has been normal since March because of COVID-19.

Work, school and private lives have all been disrupted or altered in some fashion as everyone deals with the pandemic.

But at least one thing hasn’t changed – at least not much – for COVID-19.

It’s the middle of November and the LHSAA Volleyball State Tournament is under way inside the Pontchartrain Center – as usual.

This school year has been different with online teaching mixing with in-class learning, athletic seasons starting late and evolving on a day-to-day basis.

There have been challenges in every division and every parish, some more difficult than others, and all presenting a unique school year and volleyball season for everyone involved.

But on Thursday morning, except for limitations on attendance to ensure social distancing, it was pretty much business as usual for these programs in this building at this time of year.

“This feels normal,” Ursuline coach Jay Jay Juan said, “to be on this court and to be here in the Pontchartrain Center.”

Ursuline, a perennial visitor to the Pontchartrain Center that is seeking its first state title since winning back-to-back in 2011-12, advanced to the Division III semis by upsetting second-seeded St. Michael’s 3-1.

As a young Lions team stood one point away from victory, Juan put aside his game face momentarily to jump up and down and frantically wave his arms and implore the small but passionate Ursuline student section to get even louder than it had been.

After an emotional celebration of the winning point and a quick team prayer, Juan sent his team to edge of the stands to thank their supporters for supplying pre-COVID-level noise into a COVID-restricted atmosphere.

“We feed off of our fans’ energy,” Juan said. “We’re just grateful that the LHSAA gave us this opportunity.”

No one could be sure that this opportunity would come – not during the summer, not at the start of the school year, not even as the regular season progressed.

But the LHSAA, the schools, coaches and student-athletes kept putting one foot in front of the other, taking step after step on the road to where they expect every volleyball season – even this one – to wind up.

This tournament, which continues with the semifinals Friday and the finals Saturday, is the first tournament any of these teams have played in this season because of COVID-19 limitations.

Pope John Paul II swept Catholic of New Iberia as it seeks its second consecutive Division IV title in its fifth trip to the state tournament in six years.

“This moment here in the quarterfinals feels very similar to past years,” Pope John Paul II coach Danny Tullis said. “But waiting in the hallway and not being able to watch other matches is weird. The empty seats are odd. But to pull this off in the times we’re living in is no small feat.”

“I know some people think that’s not enough, but they could have easily said none,” Tullis said. “For the LHSAA and everyone involved to pull this off is a big deal because the energy at the state tournament is unlike anything else. This brings some normalcy to this troubled situation.”

Even though the size of the crowd Thursday was small compared to past ones for this tournament, it provided an atmosphere far different than anything these teams have seen this season.

“We started the season with no fans, then we had 25,” Country Day coach Julie Ibieta said after her five-time defending state champion Cajuns advanced with a 3-1 victory against Episcopal of Acadiana. “We only had one match in front of a packed house. It was hard for them with this much noise. We have a very young team so it was nerve-wracking, but they fought through adversity.”

Everyone had to fight through unprecedented adversity just to get here to the LHSAA’s first championship event since the spring.

“This year has been crazy,” Mount Carmel coach April Hagadone said after her six-time defending state champion Cubs advanced to the semifinals with a 3-1 victory against Northshore. “We’re just so grateful to be here.”