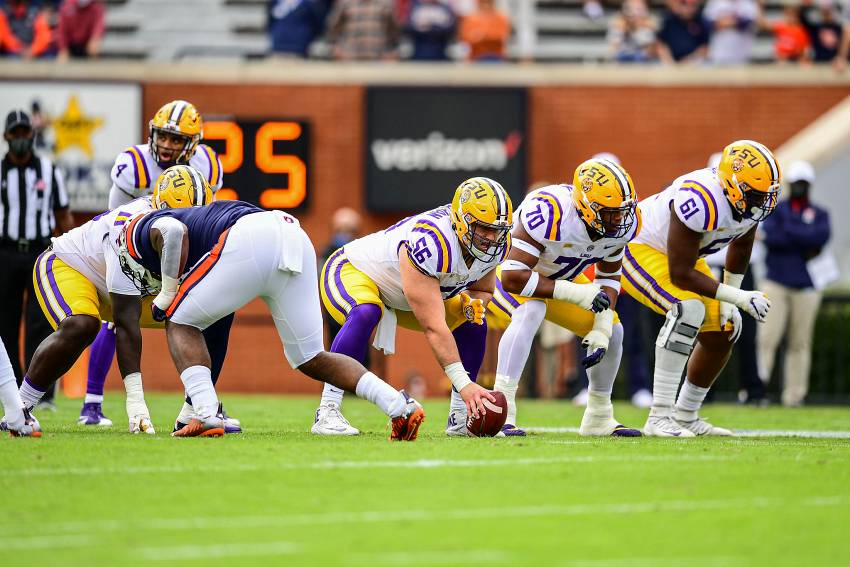 The success of the 2021 LSU offense will hinge on the performance of the offensive line. Along with a new starting quarterback last fall, the front five was trying to find an identity.

“Last year we had a lot of miscommunication with us and the quarterbacks,” explained senior guard Ed Ingram, who has 25 starts to his credit. “We always had one person running free, which wasn’t good. This year we are placing more emphasis on communicating better and improving our technique and not getting beat by the extra person running at the quarterback.”

Ingram has made 25 starts, 12 of those coming in his true freshman season (2017). Tremendous power, technique and leadership are now his calling cards.

New LSU offensive coordinator Jake Peetz would like to avoid having to resort to max protection, using only a tight end or running back protecting the passer and even going empty. Experience will be an ally of the blocking unit this season.

“In pre-snap, get an idea where the pressure is coming from,” the 6-foot-3, 315-pound Ingram explained. “We all see different stuff. We have basic rules for our protection. The quarterback is standing up, so he can see more, like if a safety is in rotation. A lot of the younger quarterbacks had problems with it last year. The more that they see it in practice, the easier it will become in the game.”

All five starters including four seniors return from the 2020 line, now expected to be a position of strength. The coaching staff has concentrated on building depth and competition along the line.

Austin Deculus (6-6, 331, Sr.) has started 34 games all at right tackle and 49 game appearances to his credit He returned for ’21 because he stated there was “unfinished business” to address. Tigers head coach Ed Orgeron calls the Mamou, La. native “a great leader for us.”

Chasen Hines (6-3, 350, Sr.), a mauler at right guard, switched from nose tackle during the 2018 preseason camp. He has seen time at center but appears to have a home at his current position.

Liam Shanahan (6-5, 304, Sr.), the Harvard grad transfer, has become a leader on the team. He can play anywhere along the line and knows everyone’s responsibilities. Having a season under his belt at center should make him better there this fall.

Dare Rosenthal (6-7, 327, Jr.) has made eight starts at left tackle. He may have the most upside amongst the group. Tremendous size and strength make him a scout’s dream. Rosenthal considered jumping to the draft this year.

The Ferriday, La. product missed two games last season due to a team sanctioned suspension. Originally a commitment to Alabama before switching to the Tigers, he has the ability to dominate if he sets his mind to it. If Rosenthal reaches his potential, the converted defensive tackle could be a first round pick in the 2022 NFL Draft.

As we head back to a normal 12-game regular season, depth becomes more critical. LSU’s is noticeable.

Cameron Wire (6-6, 311, Jr.) can play tackle or guard. The East Ascension alum has outstanding footwork, plays with a good base and possesses a mean streak. He has worked extremely hard, and it would not surprise anyone if he emerged as a starter.

Xavier Hill (6-3, 307, So.) gained valuable experience as a true freshman in ’20. He could end up seeing snaps at guard or tackle.

Marlon Martinez (6-4, 325, So.), a high school teammate of Dumervill at St. Thomas Aquinas in Fort Lauderdale, Fla., represented well in limited action in 2020. Martinez may be the heir apparent at center.

Anthony Bradford (6-5, 365, RS So.) is a player Coach O has recognized on a number of occasions as a one with special talent. If he puts it all together, look out.

A four-star 2021 early enrollee has already grabbed some attention. Grant Dellenger (6-4, 307) out of Clarkston, Michigan was another major get for the Tigers in the latest signing class. He has good knee bend, great technique, balance and active feet. Dellenger possesses the skills to gain reps as a true freshman despite the experience players ahead of him on the depth chart.

“I’ve seen a lot of good things out of Garrett,” Ingram analyzed. “He’s been doing well blocking some of the older defensive linemen. He still has a lot to work on; he’s still young. I can see a lot of great things from him in the future.”

On the flip side of the ball, true freshman defensive tackle Maason Smith (6-6, 312) is recognized quickly with his rare jersey No. 0. He has also impressed during spring drills.

The 20th rated overall prospect in the 2021 class out of Terrebonne in Houma, La., could be a pillar along the defensive line for years to come. He has great flexibility, athleticism and ability to dominate.

It’s no secret how much Smith has flashed this spring. He should see the field early this season and even end up a starter in the season opener against UCLA.

“He’s our best pass rusher inside right now, after five or six days of spring,” Orgeron raved. “So there’s no question he’s going to play and play a lot. He is a very athletic big man. He practices hard every day. He’s a very smart young man. I do believe he’s going to play a lot as a freshman.”

Ingram concurred, having witnessed Smith’s potential up close. “That kid is a dawg. I can see it now. When he’s out there playing, you can see how mean and nasty he is. I’ve gone against him a couple of times and he gave me a couple of problems. He’s a good pass rusher. He’s a rusher with intent. He has a lot to learn, but he’s holding his own.”

SURGE IN THE SWAMP

LSU recorded a signature win in the second to last contest of 2020 Gainesville, Fla at Ben Hill Griffin Stadium. The visitors were facing an uphill struggle as 23-point underdogs against the sixth ranked Florida Gators.

A surprising 37-34 win erased much of the gloom and doom in what had been a highly disappointing season.

Elias Ricks and Jay Ward each recorded interceptions, Freshman quarterback Max Johnson was 21 of 36 for 239 yards passing, three touchdowns and no interceptions. Many underclassmen made their mark. It could be a peek into the future.

“We treated it like it was no other game,” stated Ingram. “We knew that we had the opportunity to take out one of the top teams in the country and take them out of the running for (National Championship). We all came to perform, both sides of the ball. We all played to a higher standard.”

Tiger fans hope that higher standard becomes the norm for 2021.