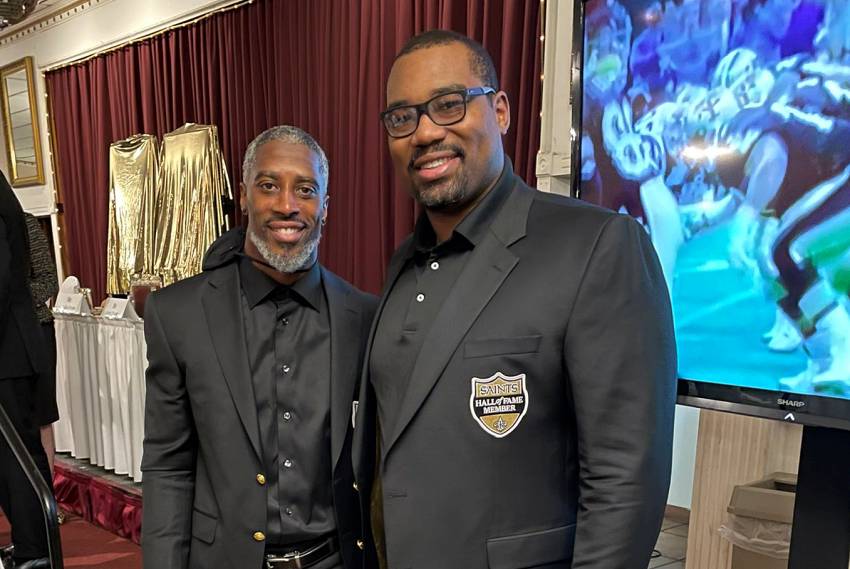 The group will be honored at halftime of the Saints-Falcons game that begins at noon Sunday in the Caesars Superdome.

Evans (fourth round) and Harper (second round) were members of the outstanding draft class that laid the groundwork for the 2006 turnaround under rookie head coach Sean Payton in the immediate aftermath of Hurricane Katrina and helped lay the foundation for the Super Bowl championship three years later.

The trip to the NFC Championship Game in 2006, the Super Bowl run and several other playoffs appearances were among the “450-something-plus” games that Garcia, a native of Honduras, called in his tenure as the play-by-play voice on Saints Spanish language radio broadcasts from 1996-2014 and 2016-18.

The Fleur e Lis Award recognizes service to the betterment of the Saints organization. Garcia’s first broadcast was the 1996 Hall of Fame preseason game against the Colts, the same team the Saints would defeat in the Super Bowl with Evans and Harper both playing important roles.

Strief recalled meeting Evans for the first time on the eve of their first training camp when he and Evans were roommates at the Airport Hilton.

“I was nervous about the first day,” Strief said. “Jahri walks in with his brother-in-law and Jahri has a smile on his face from ear to ear. I learned over the years that the smile was always attached to his face like he was on vacation.”

Evans and his brother-in-law asked Strief if he wanted to go with them to see “what’s up” in the city, but Strief was too anxious about the next day to join them.

“That’s who Jahri is,” Strief said. “No moment is too big for him. He has more confidence and poise than just about anyone I’ve even been around.”

Evans, who would become a four-time first-team All-Pro guard while in New Orleans (2006-16), said he was one of just seven Division II players invited to the NFL Scouting Combine. He said most players saw the combine as a stepping stone to their on-campus pro days, but “nobody was coming to Bloomsburg State to scout me.”

Doug Marrone, who would go on to be head coach of Syracuse, the Buffalo Bills and the Jacksonville Jaguars, was Evans’ first offensive coordinator in New Orleans.

Harper, a two-time Pro Bowl safety in New Orleans, recalled former defensive coordinator Joe Vitt always reminding players before a prime-time game that they were “representing the name on the back of your jersey – so many more people. There are people in your hometown watching you.”

The sudden emergence of Saints merchandise being sold in his small hometown of Prattville, Alabama, convinced Harper that Vitt was right.

“Now some of that might have had to do with Drew Brees and winning a Super Bowl,” Harper acknowledged.

Harper said he “left angry” when the Saints didn’t re-sign him after the 2013 season and received a much-needed humbling with his new team in Carolina.

The Panthers reached the Super Bowl in his second season in 2015, but lost to New England.

“I needed to come full circle,” Harper said, and he did when he re-signed with the Saints and finished his career in 2016 in New Orleans.

Though they come from Honduras, Pennsylvania and Alabama, the three belated inductees will from here on out share a bond formed in New Orleans.

Evans called Harper “my brother” and finished his speech by saying, “Who dat, baby!”

Harper called Evans his “frat brother” and finished his speech by saying, “Who dat and for all the LSU fans in here, Roll Tide!”

The crowd chuckled in recognition of LSU being a four-touchdown underdog to Harper’s alma mater on Saturday.

Then they gave him a standing ovation as they had done for Garcia and Evans moments earlier.

Surely it was worth the wait.