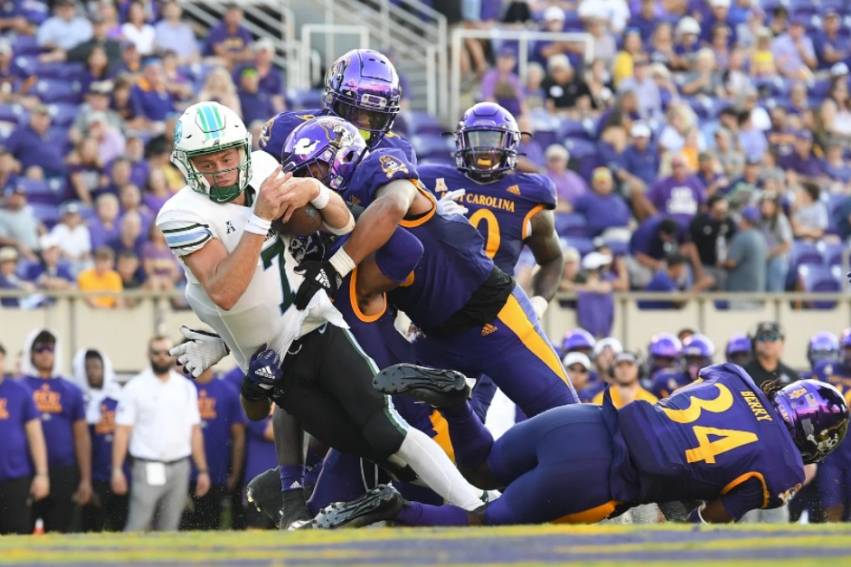 Tulane’s loss to ECU marked the Green Wave’s first loss to the Pirates since the 2014 campaign. The Green Wave entered the game having won each of the past three meetings.

“I just told the team that our margin for error is very small. It’s always going to be that way,” head coach Willie Fritz said. “There are a bunch of teams that have won games doing things right. We can’t make multiple mistakes and expect to win. It’s not going to happen. We have to play really well. If we do that, we have a chance to win every game. You can’t just roll the ball out there and beat somebody. My job is to find a way to help us play better.”

Tulane quarterback Michael Pratt led the way offensively for the Green Wave, as he passed for 268 yards and accounted for three touchdowns (one passing and two rushing). With his passing score in the second quarter, Pratt extended his consecutive passing touchdown streak to 14 games.

The Green Wave also got a strong offensive performance from running back Cameron Carroll. The Mississippi native accounted for 147 all-purpose yards (80 yards rushing and 67 yards receiving). He also rushed for a touchdown.

As a team, Tulane was outgained 612-404. The Green Wave also had four turnovers which ECU turned into 14 points.

The Pirates came out swinging as they scored on each of their first four drives of the game and opened up a 24-0 lead. ECU held Tulane in check for most of the first quarter, as it held the Green Wave to just 11 yards of total offense.

“This one is on everybody,” Fritz said. “Me, my assistants and players. We did not play or coach very well. You’ve got problems when you dig a hole as big as we did.”

Tulane got its offensive in gear in the second quarter, as the Green Wave engineered a 10-play, 75-yard drive. Pratt found running back Ygenio Booker in the endzone for a 16-yard pitch and catch.

ECU responded with a scoring drive just before the end of the half to open up a 31-7 lead.

ECU once again had an answer for the Green Wave’s offensive charge, as it found he endzone on its next two scoring drives to open up a 45-23 advantage midway through the fourth quarter.

Tulane added another score with just under seven minutes to go in the game, as Pratt rushed in from two yards out.

The Green Wave would get no closer as ECU went on to secure the win with another scoring drive to make the score 52-29.

Tulane returns to action on Thursday, as it welcomes Houston to Yulman Stadium. The two teams will kickoff at 6:30 p.m. CT.

TEAM NOTES
• Tulane’s matchup with ECU marked the 18th all-time meeting between the two teams. ECU holds the all-time series lead 12-6.
• The Green Wave’s setback to ECU snapped Tulane’s three game winning streak over the Pirates.
• Tulane dropped its American Athletic Conference opener for the second straight year.
• The Green Wave found themselves in a 24-point hole in the second quarter, but responded with three touchdowns to cut ECU’s lead to one score with 3:39 to go in the third quarter.
• ECU responded with touchdown drives on its next two offensive possessions.
• As a team, Tulane was outgained 612-404. The Green Wave also had four turnovers which ECU turned into 14 points.
• Nick Anderson, Sincere Haynesworth, Kevin Henry and Michael Pratt served as the team captains.
• Tulane linebacker Dorian Williams carried the Wave of Change flag and Green Wave defensive lineman Jeffery Johnson carried the No. 18 flag in honor of former Tulane student-athlete Devon Walker.
• With the loss, Tulane head coach Willie Fritz moved to 223-111-1 all-time.

OFFENSIVE NOTES
• Offensive starters for the Green Wave were QB Michael Pratt, RB Cameron Carroll, WR Jaetavian Toles, WR Duece Watts, TE Tyrick James, TE Will Wallace, OL Sincere Haynesworth, OL Caleb Thomas, OL Corey Dublin, OL Rashad Green, OL Joey Claybrook.
• Dublin’s start was the 54th of his career. Dublin has the most starts of any player on the team.
• Pratt passed for 268 yards through the air. He also accounted for three touchdowns one passing and two rushing.
• Pratt has now passed for over 200 yards in seven career games.
• With his passing score in the second quarter, Pratt extended his consecutive passing touchdown streak to 14 games.
• Carroll scored his 22nd career touchdown, as he plunged in from a yard out in the third quarter.
• Carroll rushed for a team best 80 yards and hauled in a pair of catches for 67 yards. His 67 receiving yards were a career high.
• Will Wallace hauled in his second touchdown reception of the year.
• Duece Watts, James and Booker tied for the team lead with four receptions apiece.
• Duece Watts led the team with 79 yards receiving.

DEFENSIVE NOTES
• Defensive starters for the Green Wave were DL JoJo Dorceus, DL Jeffery Johnson, DL Noah Seiden, LB Dorian Williams, LB Marvin Moody, DB Jadon Canady, DB Jaylon Monroe, DB Ajani Kerr, DB Macon Clark and DB Rudy Dyson.
• Johnson’s start was the 37th of his career which is the most of any player on the defense.
• Williams, Canady and Clark each had eight tackles apiece. Monroe recorded a pair of pass breakups. Canady’s seven solo tackles were a team-best.
• Dorceus recorded a sack and 1.5 tackles for loss.
• Marvin Moody led the team with 2.0 tackles for loss.
• For the first time this season, Tulane failed to create a defensive turnover.
• As a team, Tulane finished the game with 5.0 tackles for loss and 2.0 sacks.

SPECIAL TEAMS NOTES
• Punter Ryan Wright finished the game with four punts for 185 yards (46.2 average). His 65-yard punt was his second punt this season of 60 yards or more.
• Wright also completed his first career pass on a fake punt in the fourth quarter.
• Merek Glover connected on one extra point in the second quarter and moved passed Cairo Santos for second all-time in total points.