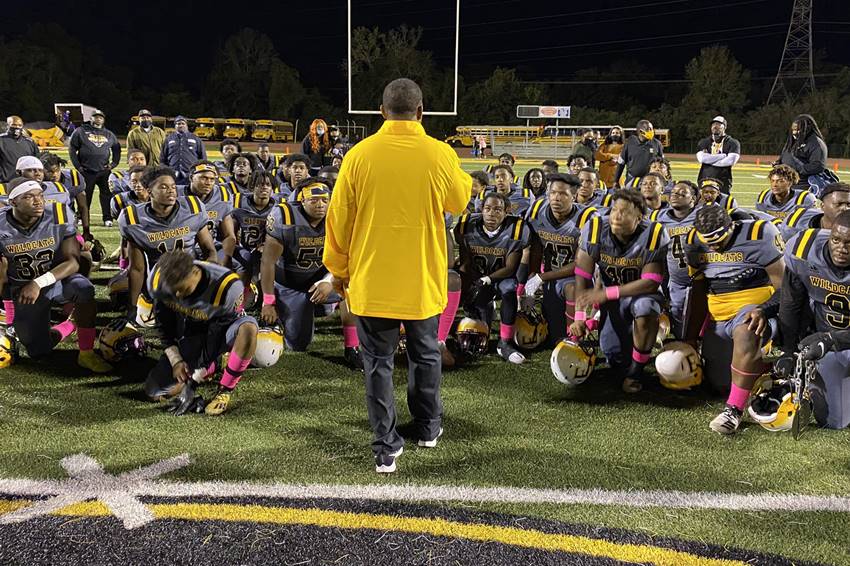 Greco went on to a distinguished coaching career on the high school and college level, departing soon after the championship run with the Wildcats while Byrd went on to make his name in basketball as one of the most accomplished coaches in Louisiana history.

Since then, East St. John had some good teams, reaching the quarterfinals, but has never come close to replicating the championship season.

That could change soon under an East St. John graduate who is putting the “E” for excellence back in the Wildcat program.

Brandon Brown took St. Helena to the 2A state championship game in 2017.

Brown, a 2001 graduate of East St. John, returned home to Reserve to guide his alma mater in 2018. He appears well on his way to restoring the Wildcat bite.

East St. John registered a signature victory, one of its best in recent years, and did so in convincing fashion, whipping rival Hahnville 38-16 at Joe Keller Stadium Friday night. It was the second win in three years for Brown and East St. John over Hahnville, which had dominated the series previously in recent years.

After Hahnville had a good opening drive but an apparent touchdown pass from Andrew Naquin to Troy Kendrick was ruled out of bounds on a close call, turning the ball over on downs to the Wildcats, who never looked back.

After a scoreless first quarter, East St. John erupted for three scores in the second quarter.

Quarterback Marcus Jackson put Hahnville on top with a 2-yard touchdown run to make it 6-0 with 11:04 to play in the half.

Jackson then connected with Kylon Harris on a 16-yard touchdown pass and it was 12-0 with 7:47 to play in the half.

Cortez Fisher scored on a 17-yard touchdown jaunt and the lead grew to 18-0 by halftime.

Fisher then came up with a huge play as East St. John went to the trick bag, faking a punt. Fisher took the direct snap and raced 75 yards for a score to increase the lead to 24-0 in the third quarter.

Hahnville finally got on the board in the third quarter on a 1-yard run by Naquin and the 2-point conversion cut the deficit to 24-8.

The momentum did not last long.

East St. John answered, with Jackson hitting Harris on a 59-yard touchdown pass and it was 30-8 as the third quarter concluded.

The Tigers wrapped up the scoring with 10:31 to play on a 70-yard touchdown run by Trey LaBranch.

Jackson was superb, completing 12-of-14 passes for 207 yards and three touchdowns, all to Harris who had five catches for 165 yards and the three scores.

Fisher finished with 28 carries for 162 yards and two scores.

“We knew all three were great players,” Brown said. “Marcus commands our team as a leader and does everything right. We lost him to injury for a while last year and we knew that when healthy, he would be very good. I talked to all three early in the week. At the end of the day, the ball is going to be in the hands of one of them.

“Cortez is a 15-year-old sophomore. He had three fumbles the week before and he stepped up. Kylon has bought into to everything we are preaching. He is a basketball and baseball player. We asked him to give us a chance and he is a really good football player.”

For Brown, winning at East St. John is personal.

“This is home for me,” Brown said. “It means a lot to come home and try to build something here. We are going to re-write our narrative that we are undisciplined and not well coached. People asked how we could compete with Hahnville. We showed that we can do so. Hahnville is an excellent program and Daniel Luquet does a great job. We want to show that we are the new standard.”

The Wildcats cleaned up some issues from their first two victories over Sophie B. Wright and H.L. Bourgeois.

“Our first two games were really sloppy but we found ways to win,” Brown said. “That is what good teams do. We had five turnovers against H.L. Bourgeois but still won the game. We knew we could not do that against Hahnville. I was extremely pleased with the way our team played.”

The Wildcats made progress in 2019, an indication of what was to come.

“We kind of saw this happening at the end of last year,” Brown said. “Our kids have bought in to building brick-by-brick, taking it one step at a time. We played with passion last night.”

“It is a sandwich game,” Brown said. “We cannot get too high or too low. We have to remain focused and to not overlook Helen Cox with Destrehan following. We have to take care of business first before we worry about Destrehan, to be a mature. We just want to set a new standard. This is our time. Why not us? I wasn’t even born the last time we won a state title. I want to change that.”