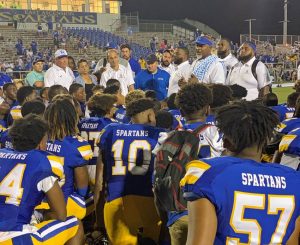 GONZALES – It’s only week one of the prep football regular season, but fans were already in for a treat on Friday night in Ascension Parish.

In what was one of the most anticipated games to start the year, East Ascension pulled off a 40-31 victory against Zachary at home on Friday night.

The Spartans came up with two key turnovers in the fourth quarter: an interception by Jyren Ester, followed by a late fumble recovery by Masey Lewis that resulted in a final touchdown drive for East Ascension to put the defending champs away.

Defense may have been the deciding factor, but this game was all about offense. Both teams traded scores throughout the contest, leaving everything on the field.

East Ascension rushed for 350 yards. Kendall Washington struggled early with only seven yards in the first half, before exploding for 130 yards on 11 carries in the final two quarters. His 42-yard run late in the fourth quarter sealed the deal for the Spartans.

Broncos quarterback Keilon Brown was a man on the loose. His athletic ability was on full display in the second half when Brown lost the defense for 60 and 43-yard touchdown runs, giving his team a 31-27 lead heading into the fourth quarter. Jones would finish the game with a whopping 211 yards on 15 carries.

“We told our offense we were going to have to score some points tonight,” East Ascension head coach Darnell Lee said. “Especially when you go against a special kid like Keilon Brown.”

But it was East Ascension’s signal caller Cameron Jones stepping up late for the Spartans. Jones connected with stud wideout Steven McBride on a 27-yard touchdown pass to give East Ascension the late lead, and ultimately the win.

Jones finished 6 of 11 for 144 yards and three touchdowns, while rushing 10 times for 90 yards and two touchdowns. McBride and Jones showed a strong rapport connecting on three touchdowns in the game. Along with three scores, McBride finished with six catches and 138 yards.

“We have a great connection,” McBride said about Jones. “We work hard together every day to prepare for these games.”

The defending Class 5A state champs aren’t off to the start they wanted, but when asked about how the team will respond, Broncos head coach David Brewerton says his team’s overall experience will help them recover from the loss.

“(How we respond) depends on the leadership internally in the team,” Brewerton said. “You could take a game like this and use it to get better or you can let it beat you next week. I hope that doesn’t happen, but we’ll see. Our kids have played in a lot of big games and I expect them to bounce back from this pretty good.”