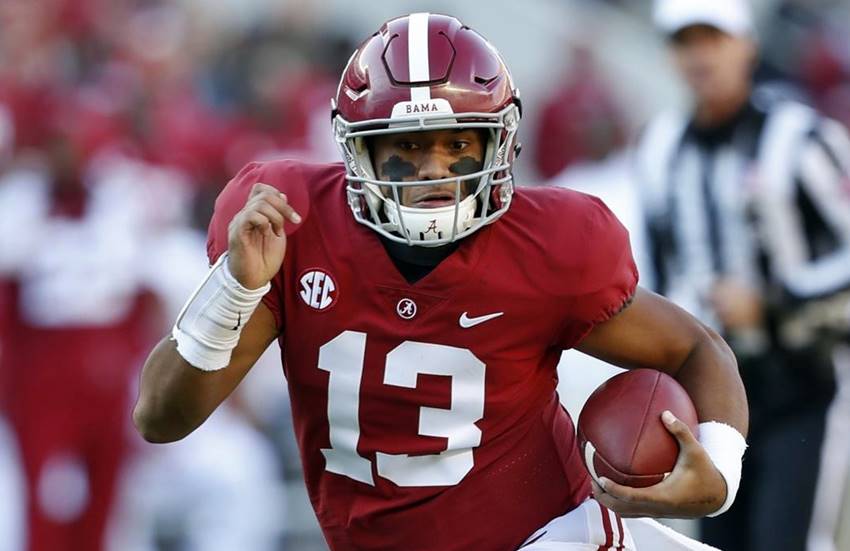 In 1937, comedians Abbott and Costello debuted a sketch of that name publicly which became a smash hit, no pun intended, with baseball, sports fans and the general public for years to come.

In 1999, Time Magazine named the routine the best comedy sketch of the 20th century.

When it comes to quarterback investments in the NFL, there have been a lot of comedy sketches in recent years.

Names that come to mind are David Carr, Tim Couch, Jeff George, Ryan Leaf and, unfortunately, JaMarcus Russell of LSU. All were chosen first overall in different NFL Drafts and all failed miserably.

Ryan Leaf and Rick Mirer were chosen second overall and both fell way short of expectations.

Forgettable names like Joey Harrington, Heath Shuler and Akili Smith and Jack Thompson were third overall picks who did little or nothing in the NFL.

The best quarterbacks are very often not the highest draft picks.

When it comes to the best NFL quarterback of the 20th century, my vote goes to Joe Montana, the coolest customer to ever set foot on a football field.

Montana was a third-round pick.

In the 21st century, Montana was surpassed by Tom Brady, now widely regarded as the greatest of all time.

Brady was a sixth-round pick.

Other than combining to win 10 Super Bowls, the one aspect of the careers of Montana and Brady that is consistent is that both did not end their careers with the team that made each famous and that each made famous.

That is such an interesting dynamic, considering the quarterback position is easily the most important position in the sport.

Considering the best quarterbacks in NFL history, it is amazing how many of those all-time greats played for more than one team.

Incidentally, Brees and Favre were second-round picks. Unitas was a ninth-round selection.

Based on recent developments, there is a reasonable to good chance that Aaron Rodgers will join the list of those by playing for another team.

While there is turnover at the quarterback position annually, has their been an offseason in recent history with as much significant change as this one? Is this, perhaps, the most dramatic movement ever seen at the quarterback spot from one season to the next?

Brady is now a Buccaneer. Rivers is now a Colt. Newton has no team, as of yet.

Then, a Super Bowl MVP in Nick Foles joins his third team in as many years, joining the Chicago Bears.

Teddy Bridgewater is now a Panther.

Jameis Winston is a Saint and Marcus Mariota is a Raider. They were the top two picks in the NFL draft in 2015.

Now, Andy Dalton is a Cowboy. Will the Cowboys finally settle their contract squabble with Dak Prescott?

Then, there are the newbies.

LSU’s Joe Burrow will take over in Cincinnati for Dalton.

Tua Tagovailoa is clearly the quarterback of the new look Dolphins. The transition from Ryan Fitzpatrick is inevitable. If Tagovailoa is healthy, that should come sooner, rather than later.

Justin Herbert is set to take over with the Los Angeles Chargers for Rivers.

Barring any moves in the next two months, Jarrett Stidham will have the unenviable task of following the ultimate legend with the Patriots.

The Eagles invested in Jalen Hurts. Do you want to bet that he will get on the field in 2020? He will, in some form, take snaps, whether or not Carson Wentz remains healthy.

Then, there is Jordan Love, the anointed future, at some point, in Green Bay.

While Rivers holds the fort in Indianapolis, the cavalry charge of Jacob Eason cannot be far behind.

Jake Fromm will sit and learn behind Josh Allen in Buffalo.

Newton is the last domino left to fall. Are Bill Belichick and Doug Marrone going to bite? Would Ron Rivera change his mind from “you never know” and go back in time for his former signal caller in Newton or does he believe in Dwayne Haskins? Does Belichick really believe in Stidham? Does Marrone truly believe Gardner Minshew can be his man?

Where will Mitchell Trubisky be in 2021? Can Drew Lock finally solve the revolving door at quarterback in Denver? Will Jacoby Brissett get another shot at being a starter in the league? Will Derek Carr make it through his lucrative deal with the Raiders through its duration in 2022? Will Haskins establish himself in Washington?

Colin Kaepernick remains out of the league since 2016. The chances of him ever returning grow slimmer annually.

Everyone is pulling for Alex Smith and his improbable attempt to return to the NFL after 17 surgeries on his left knee since a gruesome injury suffered in 2018. Of course, that is unlikely, given the severity of the injury.

The best quarterback rooms in the NFL presently include New Orleans (Brees, Winston and Taysom Hill), Dallas (Prescott and Dalton), Las Vegas (Carr and Mariota), Chicago (Trubisky and Foles), Philadelphia (Wentz and Hurts), Green Bay (Rodgers and Love), Indianapolis (Rivers, Eason, Brissett), Miami (Fitzpatrick and Tagovialoa). All have more than one quarterback capable of starting and succeeding in the league.

How important is having an elite quarterback?

The first 14 Super Bowls were won by quarterbacks who eventually earned Pro Football Hall of Fame induction. The 15th, Jim Plunkett of the Raiders, is the only two-time Super Bowl champion at the position never to be inducted into the shrine in Canton, Ohio.

In the 54-year history of the Super Bowl, only 12 winning team starting quarterbacks will never make it into the Pro Football Hall of Fame.

Many have already been inducted.

Lamar Jackson is the reigning Most Valuable Player in the league while Mahomes, Brees and Brady are well on their way to historical glory. Only Jimmy Garoppolo would not be in the elite category, among those contenders and his career is off to a promising start.

By the end of the 2020 NFL season, how and when it occurs, the answer to the question of who’s on first will be a team with an elite quarterback.