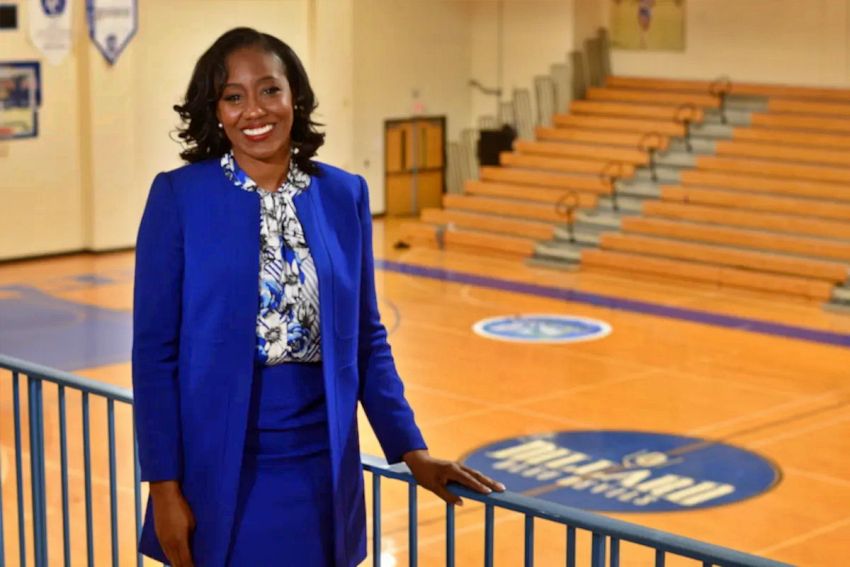 Dr. Kiki Baker-Barnes, Ph.D is one of those people who always appears high on life. She never seems down and always gives a feeling of someone in motion.

Barnes is the first Black female commissioner in conference history and the first in the history of the National Intercollegiate Athletic Association (NAIA). The Gulf Coast Athletic Conference membership consist of eight Historically Black Colleges and Universities (HBCUs).

Since its founding in 1981 with seven charter members, the GCAC has experienced a great deal of change over the course of four decades. The conference offers 13 sports (6 men’s and 7 women’s) to eight member institutions in six states.

Current members are Dillard, Fisk, Oakwood, Philander Smith, Rust, Southern University at New Orleans (SUNO), Wiley and Tougaloo. Most of the conference has enrollments of less than 1,000. SUNO has the largest enrollment at 2,700 students.

Baker-Barnes’ successful 16-year run at Dillard as the only female athletic director in Louisiana serves as a footprint for her new, permanent position.

“I thought, what if all of our schools had the opportunity to be supported at a higher level. I see my job as commissioner to provide that support and to work to get the resources for our schools to be successful and generate revenue insuring that our programs will be competitive.”

Motion is the name of the game for Dr. Baker-Barnes. That is, forward motion. In a short period of time, she has the GCAC on the move. However, there’s one aspect of stability that’s also good for her and her league.

The GCAC has a home-office for the first time, operating out of Maroon, a minority-targeted co-working space located in downtown New Orleans on St. Charles Avenue.

Urban Edge Network signed on as the conference’s official streaming arm through HBCU League Pass+.  The seven-figure agreement runs five years. All of the GCAC’s games will be streamed.

“Their (Urban Edge) mission is to help HBCU’s monetize our content, create NIL opportunities for our student-athletes and to level the playing field when it comes to black-owned media, said Baker-Barnes. “Now that we have our own network, now we have assets we can sell. We get to share in the revenue and we can have sustainable, year-round financial support.”

Through this media rights deal, each school will receive a 24-foot, LED scorer’s table worth 30-thousand dollars— at no cost to the school.

The former UNO student-athlete is not claiming invention-of-the-wheel, it’s merely what the big-money collegiate programs have been doing. It’s brand-new territory for the GCAC.

It may not be the same space in terms of monetary amount as the SEC or the Big Ten, but they can say they are in the same pocketbook.

There’s also a conference deal with Hudl, a national video exchange company. The Nebraska-based company will install cameras at each school, meaning they’ll be able to do remote broadcasts. The original cost was $18,000 per school.

“After we connected them with our other partner (Urban Edge) and talked about a conference wide deal, the price was reduced to $3,000 and Urban Edge is covering the cost of the cameras for our schools. If they had talked to my athletic directors individually, that money would have been hard for them to come up with.”

The Gulf Coast Athletic Conference can also boast of having an official league sponsor in Hope Credit Union. The financial institution will sponsor its conference championships during the next two years.

“Through our partnerships and having our own network, we are able to take some of these costs away because we’ll be able to up-level our broadcasts and our facilities at no cost to our schools”, beamed Baker-Barnes.

It’s a concept the Power 5 Conferences figured out a long time – and billions of dollars – ago. Secure partnerships, sponsorships and media rights in order to build a product for which people will pay.

The largest deal of its type for a NAIA conference, it’s in line with the original mission of HBCUs, uplifting the least of us through educational and economic experiences.

For Dr. Kiki Baker-Barnes, the job of Commissioner of the Gulf Coast Athletic Conference is a calling.

“Our student-athletes deserve quality opportunities just like any other student-athletes. Our goal is to make sure that they don’t feel when they chose a HBCU they are getting a lesser experience. It gives us an opportunity to showcase our institutions in their best light.”