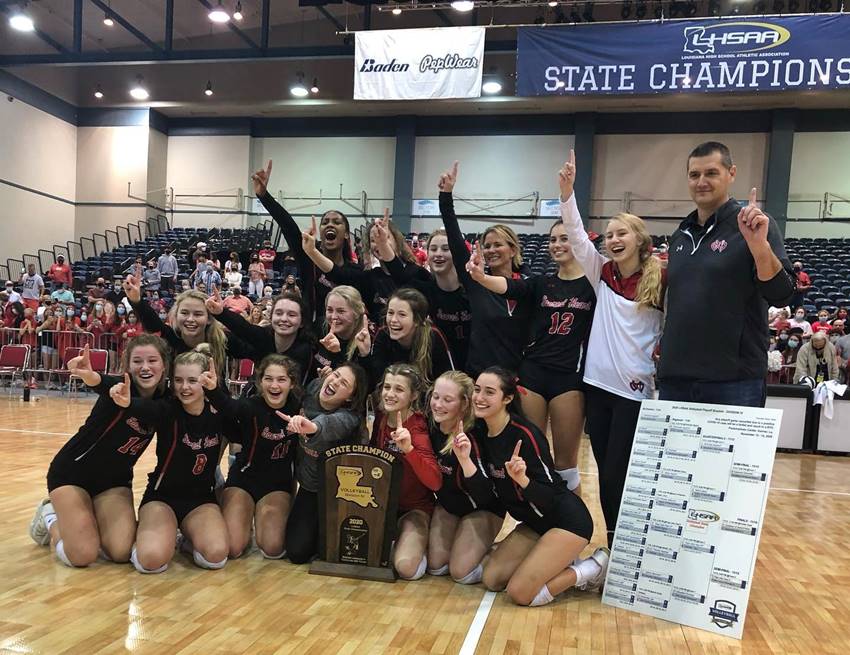 KENNER – The 2020 LHSAA Volleyball Championships concluded on Saturday as five state champions were crowned with the New Orleans area dominating. Four teams from the metro area secured titles at the Ponchartrain Center.

Country Day MVP Nia Washington
“We focused and executed our 3 set game plan. I feel this was the best match of the year and it has been a glorious season for us.”

Country Day Senior Lauren Perlis
“We had confidence in our team and it worked out. It has been an amazing season and we have had to overcome adversity with cancelled games and it has been a special feeling to play and I have had an amazing senior year and it was a team effort and we all worked hard.”

Country Day Head Coach Julie Ibieta
“We started with players that had no experience and then had a quarantine in August, but I’m proud of my team and what we went through this season.”

On Nia Washington
“She is an amazing player and helped our offense well.”

On Lauren Perlis
“She helped run our offense like a champ and put herself in a leadership role and her and the team got the job done.”

Country Day finished 23-9 while the Hawks end their fine season at 12-6.

Sacred Heart was led by Lindsey Magaw with 20 kills, May Manning with 14 kills, and Mary Catherine Mazzanti with 11 Kills. Pope John Paul was led by Rachel Hartmann with 33 kills three blocks and 19 digs. Kayla Benedic had 10 kills and two blocks, and Kendall Battistella added 36 assists and 15 Digs.

Sacred Heart Head Coach Sinisa Momic
“We came here to play and we played our best here in the tournament and we came out on top.”

Pope John Paul II Head Coach Danny Tullis
“It was a great match my seniors showed leadership and unfortunately for us we did not play well late in the match. I give credit to Sacred Heart they played well and as we all have fought through adversity this year.”

Pope John Paul Junior Mallory Norton
“We had a lot of adversity this year we overcame it we played through it and we could have played better here but we had a great season it was a disappointing loss today but us as a team got us here to Kenner.”

Pope John Paul Senior Kendall Battistella
“We could have stopped in August but it was chose our dreams or go home and we chose our dreams. The season was up in the air but we moved forward and gave it our best here in the game.”

Pope John Paul Freshman Kayla Benedic
“We did not play our best game today but we came out and played today.”

Pope John Paul Senior Rachel Hartmann
“My time at Pope has been great we over came a lot of challenges this year but between my teammates who are my friends and my other friends not on the team we overcame the challenges.”

The Academy Of Sacred Heart finishes the season 19-4 while Pope John Paul II ended up at 21-3.

The Hawks were led by Rylee Morris with 17 kills, Carleigh Breaux with 14 kills, Sarah Kirsch with 39 assists, and McKinley Bowers and Avery Boudreaux each with 11 digs. Breaux was named the match Most Valuable Player.

Hannan Sophomore Carleigh Breaux Game MVP
“We gelled during the season and our team came together this season.”

Hannan Senior McKinley Bowers
“Our team finished strong this year and came through in the beginning when our season was in jeopardy.”

Hannan Junior Rylee Morris
“Our defense did very well and Carleigh got some great kills and our team played together.”

Cabrini Head Coach Kasey Dennies
“We started out with a tough road to overcome as we had a lot of inexperienced players and Freshmen this year and the adversity showed. My team played this season and never gave up not only on the court but in life in general. They played with level heads and had fun and showed up to play this year.”

Cabrini Senior Veronica Kelley
“No one expected us to be here this year but we made it and we played this year.”

Hannan finishes the season 19-11 while the Crescents end the season at 14-10.

The Division II final was an all Acadiana affair as the #1 seed the Teurlings Catholic Lady Rebels won their rematch with Lafayette rival and No. 2 St. Thomas More, rallying from a set down to win in four sets (20-25, 25-19, 25-19, 25-20. It is the eighth straight state championship for the dominant Rebel program.

The Lady Rebels were led by match MVP Cicily Hidalgo with 16 kills, four blocks, 32 digs and an ace. Paige Guidry had 22 kills, and an ace. Samantha Fontenot had 33 assists while Emma Cother had 24 assists. Molly Webre matched her jersey number with 44.

The Lady Cougars were led by Bailey Toups with 33 assists, 15 digs and two aces. Maya Richard had 28 digs and AC Froehlich finished with 14 kills and two aces.

Teurlings Catholic finishes the season 24-2 while St. Thomas More ends its season at 14-5.

The final championship match saw top-seeded Dominican fighting past No. 3 St. Joseph’s Academy in four sets (25-13, 25-17, 23-25, 25-22). The Redstickers had taken down six-time defending Division I state champion Mount Carmel Academy in the semifinals.

Dominican was led by Katie Baker with 23 assists and 14 digs. O’Neil Haddad and Elizabeth Hardouin each contributed 10 kills and Brooke Couret finished with 21 digs.

St Joseph’s was led by Camille Counce with 20 assists and 11 digs, Olivia Judice with 18 assists and a pair of aces, Grace Tolar with 11 kills, Morgan Perry with 10 kills and five blocks, Erin Beene with 8 blocks and Simone Moreau with 17 digs and an ace.

“This is our first state championship and to come in this difficult year made it worth it. Our team came in and gave it all tonight. This state Championship was 17 years in the making and it means so much for St Mary’s Dominican. We came in tonight and were prepared for St Joseph’s.”

Dominican Junior Katie Baker Game MVP
“We came in tonight with confidence and when we lost the 3rd set we knew we could give that one as we were up 2 sets. We played to finish and win the State Championship.”

Dominican Junior Brooke Couret
“We had confidence in ourselves and we used last year as a motivation to get the state championship.”

St Josephs Head Coach Sivi Miller
” I’m proud of my team we worked hard had a slow start and our team put everything out there tonight. We played them earlier in the season and the setting was different than the 1st time.” “We were here and we are taking home a trophy.”

St Josephs Senior Simone Moreau
“We were not sure if we would have a season and their was talk of making the 1st game senior night. It is crazy that we got our season and was able to play.”

Dominican finishes the season 31-2 while St. Joseph’s Academy ended its season at 23-4.