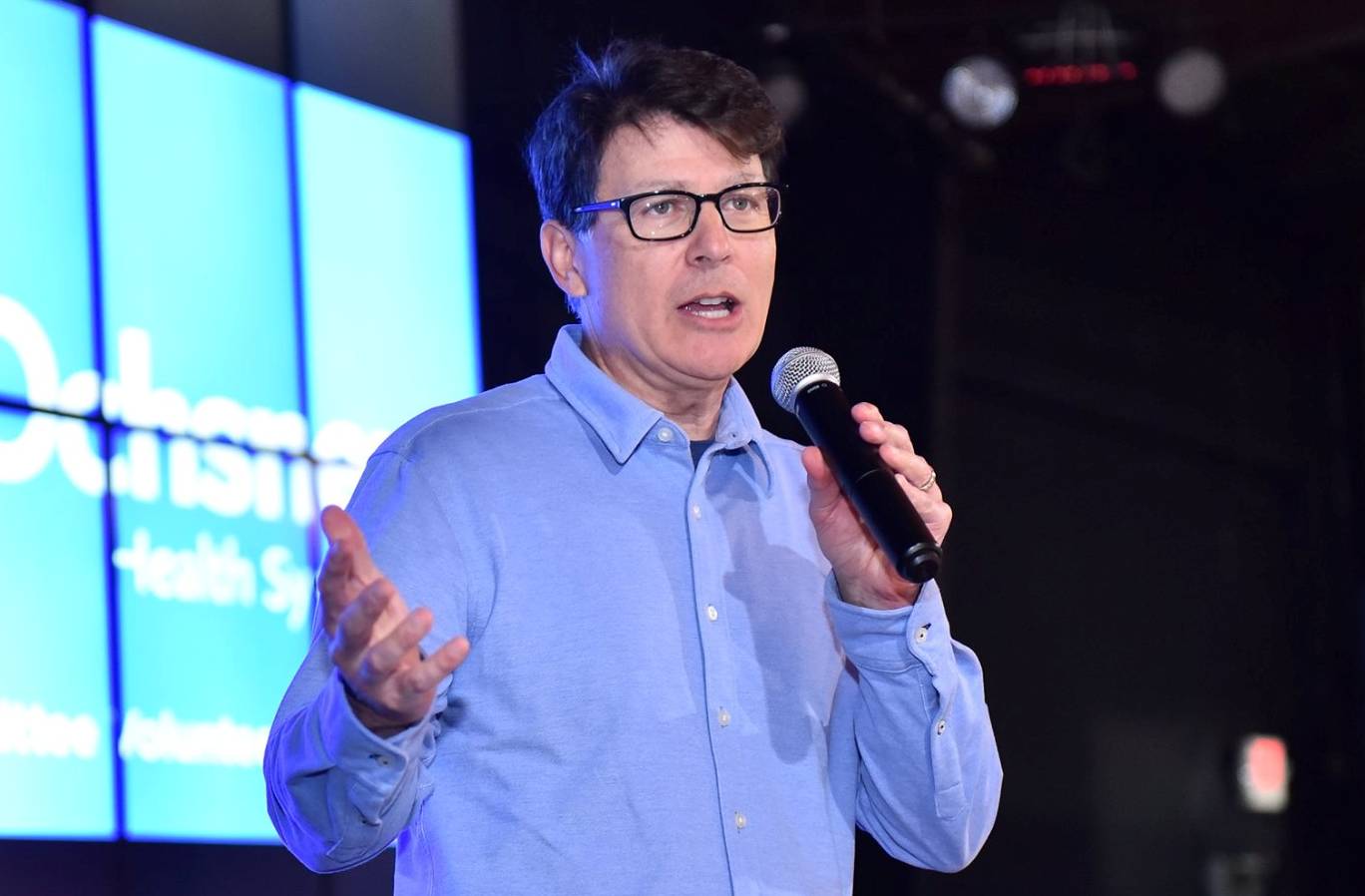 By JOHN JAMES MARSHALL
Written for the LSWA

He wanted a job in sports, so in the mid-1980s he drove to Arlington, Texas, home of the Texas Rangers. He got an interview … with the guy who ran the parking lot. He was told he could make $400 a month. “I had to pass on that,” he says today.

So that didn’t work out.

He wanted a job in sales, so he moved back home and got a job in a clothing store. Until he got a call to come in on his day off. He had to fix a flat tire just to go to the store to find out he had been laid off.

So that didn’t work out.

He was two years out of college and had no idea what he was going to do. “I did a lot of soul searching for the next couple of days,” he says now.

And then, on the advice of his father, Jay Cicero made a phone call that would change his life, an d start a path that will bring him to Natchitoches June 23-25 as he receives the Dave Dixon Louisiana Sports Leadership Award and is inducted in the Louisiana Sports Hall of Fame. For participation opportunities, visit LaSportsHall.com or call 318-238-4255.

The New Orleans Times-Picayune once ran a list of the “most powerful/influential people in sports in South Louisiana.” The late Saints owner Tom Benson was on the list. Quarterback Drew Brees was on it. Former Saints coach Sean Payton was on it. Archie Manning was on it.

Jay Cicero was on it.

It’s been a few years since that list was published and some of those names have come and gone. But there is no doubt that if the same list were created today, Cicero would still be on it.

For 25 years, he has been the President and CEO of the Greater New Orleans Sports Foundation (GNOSF), the organization that spearheads bringing some of the biggest events in all of sports to New Orleans.

“The relationships that Jay has developed over the years with the sports leagues and with the sports governing bodies is unique,” says 2007 Dixon Award winner Doug Thornton, executive vice president for ASM Global (which manages the Caesars Superdome and other sports venues). “There aren’t many people in the country who have the long-standing relationships that Jay has. It’s a personal connection as much as it is a transactional business.”

“I have always admired what he has done,” said Taylor Moore, the former owner of the Shreveport Captains, once a Class AA affiliate of the San Francisco Giants. “His success does not surprise me.”

Moore should know all about Cicero’s success. He is the one who saw first-hand what can happen when you give a wanna-be-parking-lot-attendant and laid off clothing salesman a shot.

Cicero’s father Frank was a long-time baseball coach at St. John’s/Jesuit High in Shreveport (now known as Loyola), having won two state championship during his 26-year coaching career, so he knew baseball people.

And Taylor Moore was a baseball person.

Moore was once head baseball coach at Centenary College, but in 1986 he was the leader of the group that owned the Captains. And it happened that the team was about to make the biggest change in Shreveport’s baseball history with the move from dilapidated SPAR Stadium to a shining new Fair Grounds Field.

On the advice of his father, Cicero called for an appointment to see Moore, with the intention of getting some tips and advice on how to get into the business of sports.

“I wore a suit so I could be impressive,” Cicero says. “Apparently, I was impressive enough for him to offer me a job the next day. A week after getting laid off, I had a job I had always wanted – working in baseball.”

“Probably the easiest hire I ever made,” Moore says. “I knew his heart was in baseball and he presented himself well. He did a magnificent job for everything he did.”

Cicero was hired as the Director of Group Sales, a position the team had never needed before when playing in a partially condemned stadium.

“We were really pushing for group business,” Moore says. “He did everything and developed really important relationships. He hit the ground running, no matter what the assignment was. He had the things I was always looking for — integrity and class.”

His job was more than just group nights and corporate outings. Cicero sold season tickets, outfield signs, handled promotions, pulled the tarp on the field and made sure the national anthem singer was ready to go.

And yes, he worked the parking lot.

“At the time, I didn’t think there would be any other life for me,” he says. “I was 23 years old. It was just special every night. It was fun. I was part of something that was bigger than us individually.”

After 4 ½ seasons Cicero left the Captains in June 1990 and moved to New Orleans. “I knew that I had reached my maximum of what I could do in Shreveport,” he says.

Also working at Sports Foundation was Thornton, also a Shreveport native and someone who knew the Cicero family for many years.

Coincidence or not, Cicero was hired the day New Orleans was awarded the U.S. Olympic Track and Field Trials (Dec. 5, 1990). That was the first significant event that the GNOSF had landed since its formation a few years earlier.

He served as Director of Special Projects and Director of Sales for three years (including the ’92 Olympic Trials and the ’93 Final Four) but after that, he became the first general manager of the Class AAA New Orleans Zephyrs, who had just moved to town from Denver.

After two years as GM, Cicero was at the winter baseball meetings in Dallas when he was informed that the team had been sold and that he might not have a job with the new owners.

“That’s OK,” he told the league president. “I’ve been offered a job at the Sports Foundation. I’ll call them tonight and tell them I’ll take the job. Perfect timing.”

By that time, Thornton had become the organization’s CEO. “It was perfect for him to come back,” he says.

“He had that experience and the relationships, but most of all he had the institutional knowledge which was required to step into that job. I knew Jay would be the perfect fit.”

Cicero came back to the Sports Foundation in 1995 as Vice President of Operations. When Thornton left to take his current position, Cicero was named the GNOSF’s President and CEO in June 1997.

And now, he was about to become one of the most influential people in Louisiana sports.

Years ago, bidding on major events for New Orleans required little more than booking a bunch of hotel rooms for the owners of major sports events, throwing a reception and doing a lot of handshaking and back slapping.

But over time, bid demands and hosting requirements began to grow and more cities wanted to get in on the action.

The Greater New Orleans Sports Foundation was formed in the late 1980s to be as competitive as possible with competing cities. But it’s more than just making sure the doors are unlocked and the air conditioner is on when it’s time to play the Super Bowl or the Final Four.

“We work with the owners of the events on what they have for bid, sometimes five or six years in the future,” Cicero says. “We do all of the work behind the scenes to figure out if we have hotel availability and facility availability. If it’s awarded, we sign all the contracts, put together the host committee and then raise the money to fulfill the obligation and be able to execute all that’s required.”

“New Orleans is a city that relies on tourism, and in particular sports tourism,” Thornton says. “Jay and his organization have done a wonderful job in marketing those assets for us. The Sports Foundation is really the chief marketing entity for the city as it relates to sports tourism. Jay has been doing that for a long time and doing it successfully.”

Cicero has served in numerous senior leadership roles, including as the executive director of three Super Bowl Host Committees and three NBA All-Star Game Host Committees, as well as serving on the executive committees for Super Bowls, the annual R+L Carriers New Orleans Bowl and the College Football Playoff championship game. He has also served in leadership roles for several NCAA Men’s and Women’s Final Fours, but it is the most recent Final Four that is a particular source of pride.

New Orleans was scheduled to host the men’s Final Four in April, but with the restrictions caused by the pandemic, everything was up in the air.

“In January, if you had told me that event would have come off like it did, I would have told you you’re crazy,” Cicero says. “It was almost unfathomable that everything happened the way it did. It was one of the most satisfying events I have ever been involved with in my 30 years. It was just something special. And to be able to deliver that for the city and the state, it felt great.”

It’s been 25 years since Cicero took over as President and CEO of the Greater New Orleans Sports Foundation, and he can still see that same kid who struggled to find his place and find what he wanted to do with his life.

“I get this from my dad, but there’s a great feeling in teaching younger people what we do,” he says. “To be able to pass that knowledge and experience on is very gratifying. It’s still a challenge.”

Cicero says there is no doubt that what happened with minor league baseball in the late 1980s in Shreveport is something he has carried with him, and is still evident across the state today.

“What Taylor Moore created (at Fair Grounds Field) was something I’ve tried to emulate with the Sports Foundation,” Cicero says. “The family atmosphere that was created, the attitude that you didn’t have to overcharge and underdeliver to be successful. It was a very special five years in my life that I will never forget. I owe him. He gave me a shot.”

Which is all Jay Cicero has ever needed.