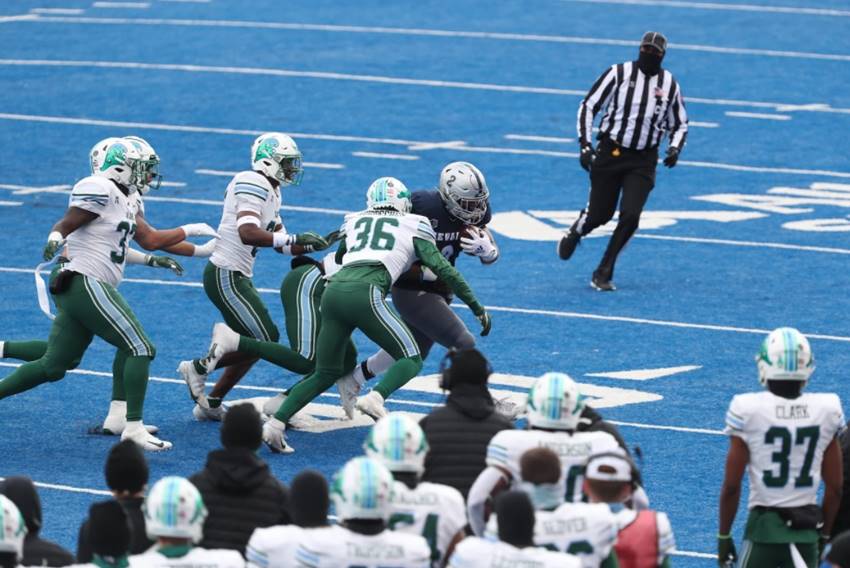 We have heard it and used it frequently – excuses are for losers.

Tulane was the loser Tuesday in the Famous Idaho Potato Bowl in frigid Boise, falling 38-27 to Nevada.

The loss left the Green Wave feeling as blue as the absurd turf of Albertson Stadium.

On the surface, the story was simple.

The Green Wave defense could not stop the run against a team that has not run the ball well all season long.

Predictably, Tulane could not stop the air attack against a good passing team and Carson Strong, a quarterback who will be drafted by an NFL team.

Then, there were the ugly numbers for Michael Pratt.

The talented freshman had an outstanding season and gives Tulane security and great promise for the future.

Pratt threw three interceptions, was sacked eight times, completed under 50 percent of his passes, and was hit on many more occasions.

He got his hand and wrist gashed and was seen limping around a few times.

It was a tough day in Boise for the boys of Tulane but it does not diminish the promise of a promising future.

When you are solid at the most important position on the field, you have a good chance to be successful and Tulane has that piece to the puzzle.

While excuses are for losers, in fairness, Tulane had excuses and plenty of them to point to for the loss to a team it could have beaten if playing with a full compliment of its most important players.

Tulane was without defensive tackle De’Andre Williams. It was without star defensive ends Patrick Johnson and Cameron Sample. Wide receiver Deuce Watts did not play. Both starters on the right side of the offensive line, freshmen Josh Remetich and Trey Tuggle, did not play.

Then, left tackle Joey Claybrook left the game injured in the third quarter.

Then, Tulane lost its best wide receiver, Jha’Quan Jackson, who had scored twice in the game, along with tight end Tyrick James, to injury.

Of course, running back Amare Jones departed the team, entering the transfer portal. Earlier in the season, the team lost dynamic running back Tyjae Spears to a torn ACL.

Willie Fritz dismissed defensive coordinator Jack Curtis while offensive coordinator Will Hall departed prior to the game for Southern Miss. Hall took offensive line coach Cody Kennedy with him. Chip Long and Chris Hampton and George Barnett were thrust into action, into the fire.

Against a capable team, the changes, the adjustments and the massive losses were simply too much to overcome.

A missed field goal by Merek Glover did not help.

Still, after trailing 26-7 at halftime, Tulane rallied to cut the deficit to 26-20 and had the ball with tremendous momentum.

You began to believe that a win was possible, make that quite possible.

Those hopes vanished when Pratt misread a coverage and threw a costly interception while the Wolf Pack turned into a touchdown and Nevada simply took over at that point and never looked back.

The Wolf Pack amassed 480 total yards and gave Tulane a dose of its own medicine, dominating time-of-possession to the tune of 36:10 to just 23:50 for the Green Wave.

The loss ended Tulane’s hopes of a third straight winning season but it does not diminish what Willie Fritz has done in restoring the program to respectability.

Now, the challenge for Fritz is to take the program from respectability to being a contender in the tough American Athletic Conference.

It will not be easy.

To get there, Tulane must continue to recruit better players.

Replacing excellent defensive linemen is not going to be easy.

Then, there is the challenge of improving in the two most glaring areas of need.

There were way too many dropped passes to even begin to detail this past season. One of the interceptions was a drop on Tuesday.

The secondary, as a whole, needs an upgrade, perhaps a significant upgrade.

Even when in position, Tulane’s pass defenders simply did make plays or prevent big plays.

The 2020 season was a success for Tulane.

Credit Fritz, his staff and Dr. Greg Stewart for mitigating the incredibly difficult task of managing the coronavirus, keeping players healthy and on the field.

Tulane was able to play 12 games, including the bowl game, as many as any team in the country.

The losses to Navy and Tulsa prevented the Green Wave from having a good, winning season. They will sting in retrospect but they must serve as learning experiences.

That experience will certainly benefit returning players in 2021.

The experience of playing in another bowl game will benefit the program.

The disappointing experience of losing to close the season will not hurt as this losing effort was largely attributable to having key players and coaches available to finish the deal.

That is no excuse.

It is simply fact.