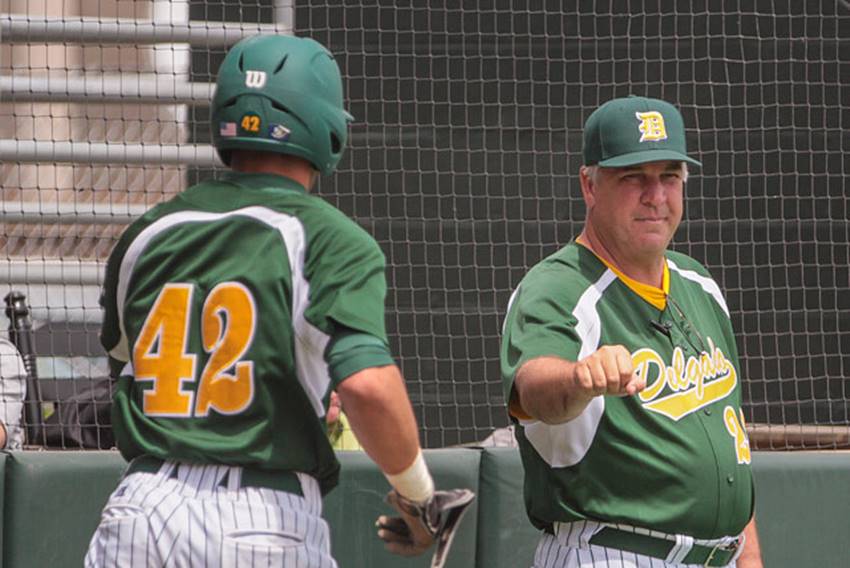 Joe Scheuermann has enjoyed a brilliant career as the head coach at Delgado and that career progresses daily.

The Dolphins (29-11, 8-1) remain in control of the region they have dominated for a decade.

Delgado has won every Region 23 title since 2012, when Meridien Community College captured the crown.

Delgado has done it with good pitching this season, though that was certainly not the case on Saturday.

The Dolphins beat Nunez 6-3 in the opening game of the series Friday behind the pitching of Corey Cook, Dwain Guice and Kaile Levatino while Bryan Broussard had three hits and two RBI to pace the offense.

Then, history was made in game two.

The Pelicans downed the Dolphins 6-3 in nine innings in a game that was scheduled for seven innings.

It was the first-ever win for Nunez over Delgado after 21 wins by the Dolphins.

It was a huge step for Glenn Powell and his program.

Powell has done an excellent job of building the Pelicans (23-16, 2-7), in just their fifth year of competition.

Upon starting the program, Powell said he wanted to model Nunez after the highly successful Delgado program. That was a good idea and a good model. With all but one player on the roster of Delgado from out of state and one on the roster of Nunez from outside of Louisiana, that model is working.

In the Nunez win, Payton Cooper singled home what proved to be the game-winner before Brady Sers added insurance with a two-run single. Jaden Brasseaux pitched five solid innings before Paul Howard pitched four scoreless innings in relief to pick up a huge victory.

Delgado restored order, winning the series with a 14-8 victory Sunday in a slugfest.

After Nunez scored a run in the top of the first, Delgado gave its response to losing with nine runs in the bottom of the first and led 10-3 after two innings.

The Pelicans showed their toughness, fighting back to within 10-7 before home runs by Michael Stutes and Davis Stephens put the game away in the eighth inning.

Also notable was the relief pitching of Grant Goodbee, who went three and two-thirds innings, not allowing a run on just one hit. Goodbee struck out nine Dolphins, including eight in a row, at one point. He left the game with an injury and here is hoping he recovers quickly.

Delgado heads to Baton Rouge Community College for a three-game series this weekend.

The Bears are very competitive.

They lost a weekend series to powerhouse LSU-Eunice two games to one, falling in the deciding game 9-8 on Saturday. The Bears have beaten LSUE twice this season.

While Delgado swept BRCC at home, the games were competitive.

Nunez won a game against the Bears in a three-game series.

The Region 23 tournament is at Pete Goldsby Field in Baton Rouge May 6-8.

While Delgado remains the king, it figures to be very competitive, anything but a sure thing that the Dolphins will win again, based on the ability of the Bears and the improvement of the Pelicans.