These were the words of the defending champion of The Mackel, TC Ford of Mandeville. He speaks for many.

For a championship that has been on a journey, The Mackel has returned home to where it began in 1993.

After surviving no championships for two years after Katrina and shifts to six different venues in recent year, The Mackel presented by Cox has the largest field it has had in years.

Ford, who last year won the championship at his home course Beau Chene, relishes the chance to compete on the newly-built South course in City Park.

“The championship is headed back home where it all began 25 years ago! It brings back fond memories of when I competed in the then-Metro a few times in the mid-90s while still in high school.”

Some things have not changed for Ford, who says his mental game is rooted in those early days.

“My mindset back then was always carefree, fearless and (the feeling of being) invincible on the greens. All feelings I plan to replicate this year on the new layout,” explained Ford, who has had a successful amateur career.

Playing college golf on the Northwestern golf team that included eventual World No. 1 Luke Donald, Ford noted that the two teammates roomed together often thanks to Northwestern head coach Pat Goss. “So I could learn as much as possible from him,” Ford said.

During his time at Northwestern, he went on win the Illinois State Amateur Golf Championship.

Bart Dornier is on the edge of Mackel history, going after his fifth senior title over four different golf courses. Another win would tie him with Tommy Brennan for most championship won in al divisions. Brennan captured five Open Division titles (1993, 1996, 1998, 2000 and 2002).

“I hadn’t realized I won the event on three different courses,” said Dornier when reminded of his feats. “But that is something I am very proud of.” 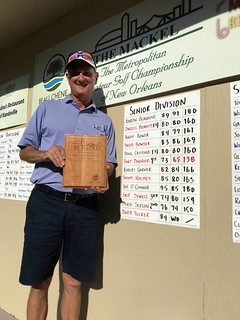 Getting better with age, Dornier has excelled on the national scene, firing a round of 64 at the 2017 U.S. Senior Amateur. In 2018, he won the prestigious 109th Walter J. Travis Invitational and placed ninth at the National Senior Amateur Hall of Fame event.

The namesake of the metro New Orleans amateur championship, Frank Mackel, is remembered fondly by Dornier.

“It is an honor to have won an event named after someone like Frank, who did so much to promote golf in the New Orleans area,” Dornier sais.

TC Ford and Bart Dornier while in two different age groups both feel the bond this championship brings to golfers in the New Orleans area and savor lifetimes of memories.

“There are great players participating, and being able to play with them and enjoy the event with them, is why I always come back,” Dornier explained.

Ford sums up why The Mackel is a cherished piece of the local sports scene.

“The Mackel is a wonderful opportunity for local golfers spanning multiple generations to compete against the best players greater New Orleans has to offer. The Mackel truly represents all that is great about New Orleans golf.”

Both men compete this weekend in The Mackel’s homecoming year on June 23-24.