Crunching the numbers for LSU-Alabama 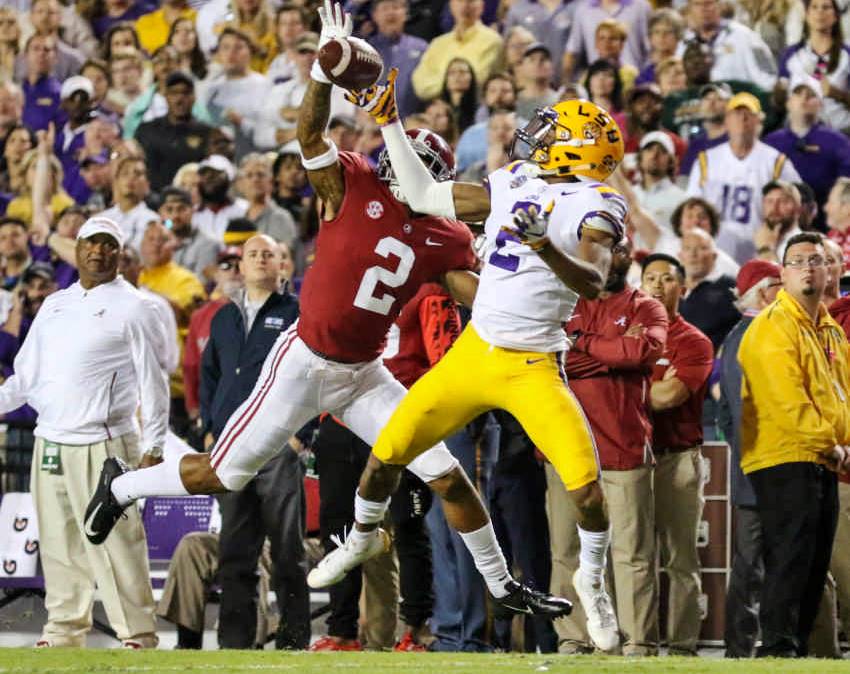 It’s that time again. a much hyped LSU-Alabama football game is next on the schedule for both SEC powers. We’ve heard the “Game of the Century” tag for this matchuo before but haven’t seen it live up to the billing or importance since the 2011 regular season.

This time around, the hype may be closer to reality than ever before. Both combatants currently rank in the top two sports in various polls. Arguably, the top two teams in the country with college football’s most thrilling passing offenses are set to collide.

The Crimson Tide hold a 271-53-3 record at home since 1929. The last time they lost a home game was November 10, 2012 in a memorable 29-24 surprise victory by Johnny Manziel and Texas A&M. Alabama leads the all–time series with LSU, 53-25-5, even though the Tigers have won nine of the past 20. The current eight-game skid by the Purple and Gold came on the heels of a successful run in the series. The 2003-’07 the Tigers won five consecutive meetings.

Crunching the numbers for a full team comparison of this year’s teams, you find that both squads are very similar.

In the rushing department, Bama averages 168 yards while LSU is up to 158 yards on the ground each game.

In another area where the teams shine, third down conversion, the Tigers are successful 50% of the time whiel the Tide converts at a 55.2% rate.

The Crimson Tide have committed 59 penalties to 51 by LSU including 12 last week against Auburn. Flags could be a major factor in a game expected to be decided by a key play or two.

The headliners of this game are no secret. Two quarterbacks with Heisman and high NFL draft pick futures fuels title hopes for LSU and Alabama. Joe Burrow is the leading passer in the SEC with 2,805 yards. Right behind him is Tua Tagovailoa with 2,166 yards passing.

Yet, it may be the better running game that wins this matchup. LSU’s Clyde Edwards-Helaire is fifth in the SEC with 683 yards while adding eight touchdowns on 5.94 yards per carry. He also has 19 catches for 125 yards. Alabama’s Najee Harris, the seventh ranked runner in the conference with 642 yards, has five touchdowns on the ground. The 230-pounder also has 5.94 per rush, identical to Edwards-Helaire.

Both teams are blessed with other talented pass targets. Henry Ruggs, 10th in SEC with 26 catches for 682 yards and six TD’s, and Jaylen Waddle (21 catches for 297 yards and 1 TD) give the Tide as talented a foursome of receivers as any college team could hope for. Waddle, by the way, is a dangerous punt returner, pacing the conference with a 21.6 yard return average.

Despite missing games with injury, LSU’s Terrace Marshall has 22 grabs 333 yards and seven scores with a 15.1 average per catch.

On the defensive side of the ball, there are a plethora of stars as well.

True freshmen are making a difference for these defenses. Inside linebacker Shane Lee stepped in at Alabama when Dylan Moses went down with injury, starting every game and tallying four sacks. Free safety Xavier McKinney leads the Tide’s defense with 56 tackles, 13 coming against Ole Miss.

Alabama cornerback Trevon Diggs has three picks plus a fumble recovery returned 100 yards for a touchdown against Tennessee.

The Crimson Tide have 19 sacks to LSU’s 20 through the same number of games. Just another indicator of how similar these teams are.

The Tide defense has surrendered 10 touchdown passes and three rushing scores. LSU has given up 13 scoring passes and five rushing touchdowns.

Joe Burrow has been sacked 15 times while Tua Tagovailoa has been dropped nine times. Coming off of ankle surgery, Tagovailoa may not have the same patented mobility on Nov. 9.

Offensively, the only freshman starter is mammoth left guard Evan Neal. You can’t miss No. 73 at 6-foot-7, 360 pounds. He has started 8 games and is playing like a seasoned veteran.

There have been quite a few pleasant surprises for the undefeated Tigers.

Burrow’s performance has been off the charts this season. The Tiger trio of Chase, Jefferson and Marshall match up with any receiver group in the country. Tight end Thaddeus Moss, the son of legendary wide receiver Randy Moss, has really come on this year with 21 catches for 246 yards and a touchdown. By comparison, current Raiders tight end Foster Moreau had 22 catches for 272 yards and two touchdowns all of last season for the Tigers.

The aforementioned tingley is exactly what was advertised, already among the top cover corners in college football. Safety Jacoby Srevens has made the biggest jump. Tabbed as the SEC Defensive Player of the Week the past two weeks, he is the team’s second leading LSU tackler with 49 stops after bouncing around between positions and even side of the football early in his college career.

The NFL scouts will be out in full force. There could be 10-11 2020 NFL 1st round picks taking the field. Tagovailoa, Ruggs and Jeudy will be. Tide left tackle Alex Leatherwood, cornerback Trevon Diggs and free safety Xavier McKinney are all first round projections as well. The injured Moses has missed the entire season but could possibly be a 2020 top pick if he chooses to enter the NFL draft.

LSU has cornerback Kristian Fulton, safety Grant Delpit and Burrow as high first round picks-to-be in the ’20 draft. Stingley has two more college seasons before he ends up as a first rounder, provided he stays healthy.

The talent bases have almost always matched up well in the current era of the LSU-Alabama series but now the styles do as well. Let’s hope the game lives up to the hype this time around.