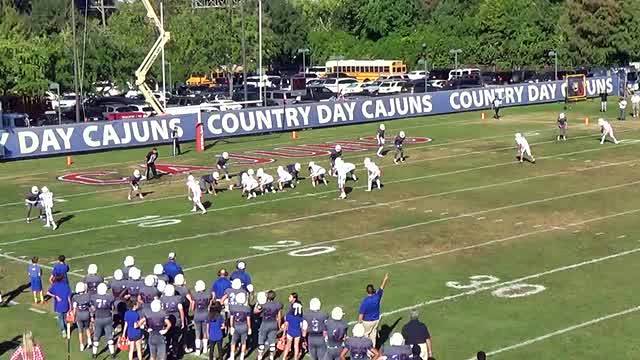 NEW ORLEANS – A high-profile running back will be in the spotlight for the second consecutive Friday as Crescent City Sports continues its live streaming coverage of high school football this week with a matchup between Riverside Academy and Country Day.

Kickoff is scheduled for 4:30 p.m. from Wenzel Field on the Country Day campus in old Metairie, with CCS’ coverage beginning 10 minutes prior.

Riverside senior running back Elijah “Bill” Davis, a commitment to the University of Louisiana at Lafayette, earned CCS and Greater New Orleans Quarterback Club player of the week honors for Week 1 of the season after accounting for 329 yards from scrimmage and seven touchdowns in the Rebels’ season-opening victory over St. Thomas Aquinas. In four games, Davis has rushed for a state-best 1,022 yards.

The teams’ only losses this season are to teams ranked in the top three of the Crescent City Sports top 10 in Classes 3A and 2A. The Rebels (3-1) lost at Newman in Week 2, while the Cajuns (2-2) are looking to get back in the win column after defeats to Episcopal and Amite the last two Fridays.

A year ago, Country Day held off a late Riverside comeback to win 38-31 in LaPlace. The last three meetings in the series have not only been decided by a total of 10 points, but have featured both teams topping the 30-point mark.
Lenny Vangilder and Wayde Keiser will describe Friday’s action.