Crescent City Sports’ extensive live streaming coverage of high school sports for 2019-20 continues this week with three games from different areas of the state in a span of 48 hours.

The coverage begins Thursday with the Allstate Sugar Bowl LHSAA Thursday Night Game of the Week matching Ouachita Christian and Cedar Creek from Ruston, continues Friday in Covington with a non-district matchup between Pearl River and Ouachita Christian and wraps up Saturday in Metairie with a showdown of Catholic League unbeatens Brother Martin and Archbishop Rummel.

Thursday’s game – which is also available through the LHSAA Live App – matches a pair of 4-1 teams in OCS and Cedar Creek. Both are 2-0 in District 3-1A and part of a three-way tie with Oak Grove atop the league standings.

In addition to district title ramifications, Thursday’s game could loom large come next month when playoff brackets are announced. OCS is currently sixth and Cedar Creek ninth in unofficial Division IV power ratings, with the top eight teams earning the right to play at home in the first round. 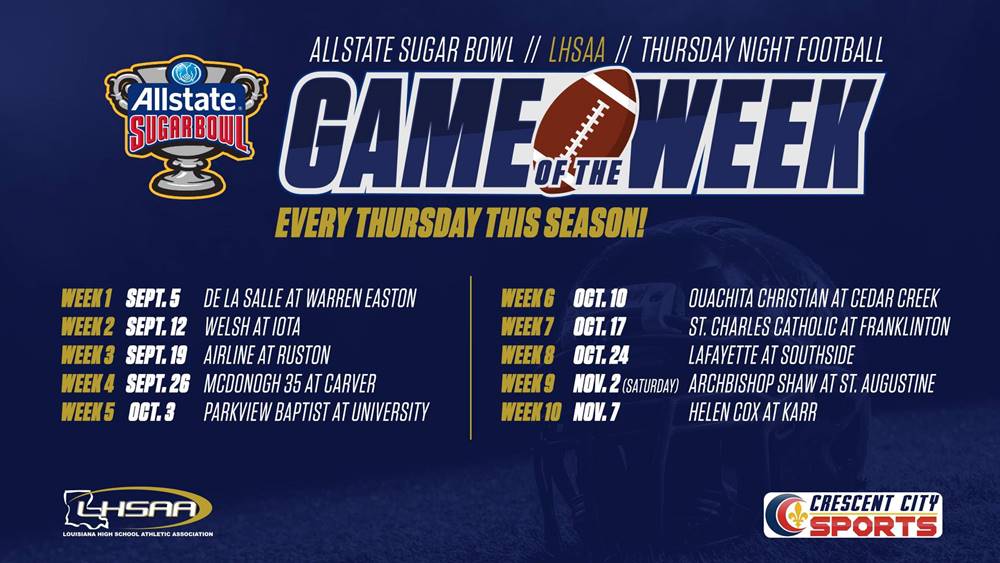 On Friday, Pearl River (4-1) will look to bounce back from its first loss of the season when it heads west on I-12 to Northlake Christian (2-3).

Pearl River features one of the area’s top running backs in senior Corey Warren, who has already topped the 1,000-yard mark in only five games.

The capper to Crescent City Sports’ jam-packed Week 6 comes on Saturday afternoon where Brother Martin and Rummel will bring identical 5-0 records to Joe Yenni Stadium. The Raiders are third and the Crusaders sixth in the latest CCS Class 5A rankings, and they enter the week alongside John Curtis Christian as the remaining unbeaten teams in District 9-5A.

Both defenses have been among the state’s best in the first half of the regular season. Rummel has allowed no touchdowns and two field goals through five games, while Brother Martin has given up an average of 6.2 points per game.

Ken Trahan will describe the action on Thursday and Saturday, while Lenny Vangilder will handle the play-by-play duties on Friday.

The Crescent City Sports team has produced more than 300 live streams since 2012 and will feature live streaming of no fewer than 30 high school sporting events throughout the 2019-20 school year. Additionally, in cooperation with Cox Sports Television, CCS will also produce up to 10 more events that will both be televised on CST and streamed on the site.