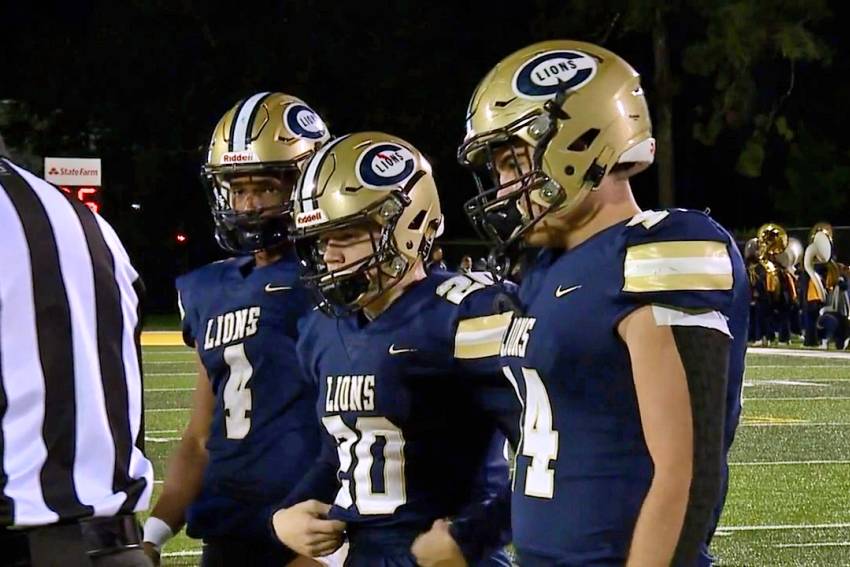 The legacy of Covington football is a long, proud, successful one.

Greg Salter continues the family and school tradition in fine fashion, having taken his Lions to a semifinal appearance in 2013 and to the quarterfinals in 2017. The Lions also won a playoff game in 2019.

Covington is coming off a 6-5 season, falling in the playoffs at Ruston.

The Lions must replace a pair of players now at Southeastern Louisiana in lineman Logan Potter and defensive back Ian Goodly but only 13 seniors graduated this year.

The result is that 13 starters return, including eight on offense.

“Coakley is more mobile while Thompson is a good leader and an accurate passer,” Salter said. “They are in the same class, both are good players and fine young men. They support each other and are each other’s biggest fan. Coakley started every game last year but Elzy deserves an opportunity, based on what he has done. I can see both playing.”

The offensive line is a strength, including three returning stars.

“We lost Potter, who was excellent, but Lewis is a good athlete who also plays basketball,” Salter said. “He’ll be a work in progress but he will gain more confidence. Champagne was arguably our best up front last year. He has outstanding technique, aggression and plays to the whistle. Senac started last year as a first-year player. He has size and strength and he did a solid job last year but he is better, stronger and more experienced with confidence. Our guards all played last year.”

The running back position is very strong with a pair of returning starters in juniors Justin Chatman (5-10, 180) and David Harris (6-0, 210). Chatman was terrific a year ago with 172 carries for 1,042 yards and six touchdowns, along with 19 catches for 243 yards and four touchdowns.

“Chatman started for us in the slot as a freshman,” Salter said. “He is a great athlete, strong and with speed. He is the grandson of former Lions great Paul Nixon. He could be one of the better backs in the state. Harris has a ton of potential and has size and great speed. He started the first few games last year but suffered a hyper-extended knee and missed significant time. They compliment each other well.”

The same is true of wide receiver, where seniors Brandon Brumfield (6-2, 155) is back.

“Brumfield is back and we are excited to get James back,” Salter said. “He was top ten in the state in receptions and yards as a sophomore. He is working his way back from an ankle injury. We like our young receivers as well in Martin and Thompson, who can really run and has come on lately. Kaleb Evans is another sophomore who could figure in the mix.”

The defense returns five starters and should be good up front.

“Bursh started every game for us last year,” Salter said. “Boggs and Sandifer each started games for us last season. Boggs missed the second half of the year with a shoulder injury and Sandifer stepped in. We should be sound there.”

“Blackwell has started since he was a freshman,” Salter said. “He is our do-everything guy. He tackles well, covers well and he is an absolute coach on the field. He is the hardest worker and a 4.4 student. He does everything right, the kind of guy you want in your program. Cole started a couple of games for us last year and got experience. Josh started the last eight games last year.”

The secondary will need some new starters to step up with no starters returning from a year ago.

The best player figures to be junior Brandon Marek (6-2, 175), who moves from starting at wide receiver to starting at free safety. The strong safety spot will be occupied by either Coakley or by senior Chance Farris (5-10, 170).

“Marek makes the move from offense and he is a very good athlete,” Salter said. “He did play some defensive back in long yardage situations last year. Kylin did not play last year and he will really help us. Jeremie is young but he is gritty and very instinctive. He has no fear. He battles for footballs. Coakley will play some at safety as he is such a good athlete and Farris will certainly play.”

The kicking game should be strong with senior kicker/punter Mason Estrada (6-0, 180) returning for his third year. Estrada is also a very good baseball player for the Lions as well and is a very good athlete.

The season opens with road games on Sept. 2 at Hoss Memtsas Stadium against John Ehret and at Franklinton. The first home game is Sept. 16 against Dutchtown.

“Ehret has good athletes, Guy Lecompte is an accomplished coach and Dutchtown is very good and always clicking early in the season,” Salter said. “We will see where we stand early.”

District 6-5A play begins on Sept. 23 at home against Ponchatoula before a road trip to Fontainebleau. A home game with St. Paul’s follows before away games at Hammond and Slidell. Then comes a home game with Northshore before the regular season ends at Mandeville on Nov. 4.

The league should be highly competitive, with Ponchatoula and Mandeville, perennial powers, featuring new coaches, and with always tough St. Paul’s and improving Northshore and Slidell in the mix while Fontainebleau and Hammond look to step up their programs.

“We know Craig Jones is a proven winner and he is excited to be at his alma mater at Mandeville,” Salter said. “Coach Trey Willie has been at Ponchatoula and is a good coach and we expect he will be solid, even losing players. Northshore was much better last year. St. Paul’s is always good. Over the last six years, we’ve had four different district champions. It is truly a league of parity.”

With an experienced team, Salter should have his Lions in prime contention for the district championship and with a real chance to take things deeper in the Class 5A state playoffs, which will look much different with the new classification of nonselect and select schools.

“I think we have as much back as anybody,” Salter said. “We are excited about the possibilities with a good foundation. We have great numbers and great interest here. It’s a new world with the changes in classification. We are with like schools. It will definitely make things more interesting. You simply play the opponent who is next. I’m curious to see what the future holds.”