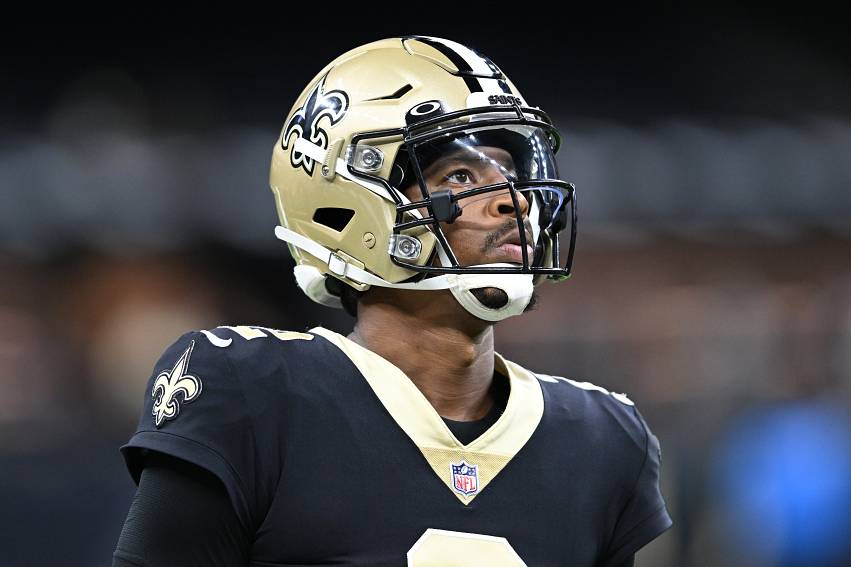 METAIRIE – Jameis Winston is starting over.

He is the New Orleans Saints starting quarterback and will lead the team into its season opener against the Falcons on Sunday in Atlanta.

A lot has happened to Winston since he last played a full season as a starting quarterback in 2019.

Back then he was with the Tampa Bay Buccaneers.

Since then he has been released, found a new employer in the Saints, threw a total of 11 passes as a backup in 2020, won the starting job with the Saints in 2021, then saw his season ended by a knee injury in just the seventh game.

Now he has rehabbed the knee and will take another crack at leading the Saints as the successor to future Hall of Famer Drew Brees, who orchestrated New Orleans’ offense from 2006-2020.

“I can’t wait to step back on the field and compete again,” Winston said as the preseason wound down, “because one thing I know I’ll never do is I’ll never take this opportunity for granted again.”

Winston was clearly happy when he finally got back on the field in the preseason finale August 26 in the Caesars Superdome, on the same field where his injury happened. He looked sharp as he drove the Saints to a touchdown against the Los Angeles Chargers, then went to the sideline.

He shook off the cob webs and got past the hurdle of his first hit, but played just that one series the entire preseason.

Now he’s looking to play 17 games – and more if the Saints make the playoffs – in the upcoming season.

The Bucs made the then-reigning Heisman Trophy winner the No. 1 overall pick in the 2015 NFL Draft and he started every game during his first two seasons.

After five seasons Winston had played in 72 of a possible 80 games, starting all but two of the games in which he had played.

Then the New England Patriots released Tom Brady after the 2019 season.

And they looked at the six Super Bowls that Brady had won.

They decided to sign Brady and not re-sign Winston.

Suddenly the quarterback who was a guaranteed starter before he ever participated in an NFL practice was unemployed.

Everything about Winston’s NFL career changed.

He took a job with the Saints, knowing that their quarterback job belonged to Brees for as long as Brees wanted it.

When Brees got injured and missed four games during the 2020 season, the Saints turned not to Winston but to Taysom Hill as Brees’ replacement.

When Brees retired after that season the Saints let Winston and Hill battle it out to succeed Brees.

He was a starter again. For seven games.

Then it was Winston who got hurt, suffering a knee injury on Halloween – against his former team – that ended his season just as the Saints were improving to 5-2.

And now Winston is back. He’s playing with a brace on the left knee and had to overcome a slight injury to his right foot during training camp.

The transition from Tampa to New Orleans is behind him. So is the knee injury.

But Winston is still a work in progress. He and Brees are about as different as two NFL quarterbacks can be.

The Saints have been trying for more than two years to make Winston more Brees-like without losing the parts of Winston that Brees himself would have loved to have.

Brees was one of the smartest quarterbacks in the NFL, possessing an uncanny ability to analyze at the line of scrimmage what the defense was planning to do and adjusting the play call or perhaps just a nuance of the formation to increase each play’s likelihood of success.

That enabled the barely 6-foot (if that) Brees to become an elite quarterback despite unexceptional (by NFL standards) physical gifts.

The strong-armed Winston at 6-4 never had to process information the way Brees did. He was never trained to do that – not at Florida State, not in Tampa.

But he has gifts that can’t be taught.

“He throws a mean out route,” safety Tyrann Mathieu said.

When Winston got to New Orleans, former coach Sean Payton, who designed the offense that helped make Brees a Hall of Famer, offensive coordinator Pete Carmichael and Brees himself started working on Winston.

Brees is gone and so is Payton. Carmichael remains and now he (assisted by passing game coordinator/quarterbacks coach Ronald Curry) and Winston are running the show.

With Winston the Saints aren’t trying to fit a square peg into a round hole. It’s more like taking a square peg made of clay and reshaping it so it fits snugly into the hole.

“In this offense we like to attack teams laterally,” Winston said. “In most of my offenses we were always vertical, heavy play action, throw the ball down the field.”

Winston can complete passes over longer distances than most NFL quarterbacks. But the offense with pass catchers such as Michael Thomas, Jarvis Landry, Alvin Kamara and rookie Chris Olave will be most efficient when Winston connects with them on shorter, higher percentage passes on a consistent basis.

In addition to rehabbing the knee, one of Winston’s points of emphasis during the offseason was to improve his precision on intermediate passes. The rehab actually was helpful in that regard because while the knee wasn’t healthy enough for Winston to follow through with the force necessary to throw deep passes, he was working on short and intermediate routes.

Virtually without fail, whenever one of Winston’s teammates was asked about him during the offseason they would say that no matter when they arrived or left the practice facility, the quarterback was there when they arrived and still there working when they left.

“I think more so than anything the leadership quality that I appreciate the most out of him is the work ethic because it doesn’t matter what you say if you don’t back it up with what you do,” said head coach Dennis Allen, who succeeded Payton in February. “And he has an incredible work ethic. And I think our guys gravitate to his personality.”

Running back Mark Ingram II noted Winston’s “evolution as a quarterback in this league.”

Few players in the NFL figure to have as big an impact on potentially elevating their team to championship status as Jameis Winston, vintage 2022.

“I think it’s his confidence in the system, the confidence in his teammates, his ability to be a leader in and out of the huddle, on and off the field,” Ingram said. “He cares about his teammates. He’s smart on the field, makes the right decisions, great arm strength, has all the intangibles you look for in a franchise quarterback.”