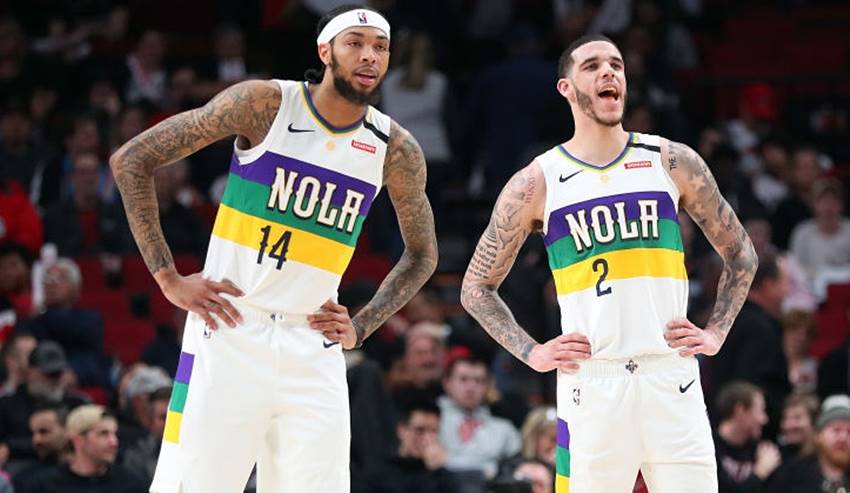 After their 115-101 win over the Golden State Warriors, the New Orleans Pelicans have gotten off to a 2-0 start following the All-Star break.

Zion Williamson led all scorers with 28 points, his 10th 20-point game of his young career.

He continues to produce eye-popping stat lines on a nightly basis; averaging 28.3 points, 8.9 rebounds, and 2.8 assists per 75 possessions this season.

Jrue Holiday made an impact all over the floor, scoring 23 points, 15 assists, and seven rebounds. Nico Melli was spectacular off the bench, putting up 20 points on only eight shot attempts. Melli has scored in double figures in six of his last 10 games.

They have now won five of their last six games, and improved to 7-5 with Williamson in the lineup.

With the Pelicans down by 10 at the half, it was the 19-year old rookie phenom who ignited the comeback. This time, his words in the locker room were as fiery as his play has been on the court.

“It was just one of those things where I just kinda said we gotta play with more energy,” said Williamson. “We are much better than this and we aren’t playing like ourselves, not moving the ball and just gotta be better.”

The message found its intended mark.

The Pelicans, who had trailed by as many as a dozen points in the first half, put the defensive clamps down on the Warriors’ offense, allowing only 45 points in the second half.

“I think in the second half we did much, much better job the way we started off the half defensively and then I thought we did a good job of moving the basketball and just creating situations for drive and kicks,” said Alvin Gentry.

For just the eighth time this season, New Orleans held an opponent to fewer than 105 points. In those games the Pelicans are 7-1.

Holiday led the defensive effort. Guard Damion Lee had 18 points for the Warriors at the half. He finished with 22, making only two of his six shot attempts over the final 24 minutes

“I thought Jrue did great defensively, and he kinda set the tone for us in the second half,” Gentry added. “We just gotta learn to be focused and start the game the right way so that we aren’t playing behind during any stage of the game.”

New Orleans is still playing from behind in the chase for the eighth seed in the Western Conference, but is slowly starting to gain ground. The Pelicans trail Memphis by 3.5 games with 25 left to play.

Considering how the season started and a schedule that features 18 games against teams .500 or below over the final 25, the Pels find themselves perfectly poised to return to the postseason for only the fourth time in the last decade.

With Williamson acting as the catalyst, the Pelicans now have one of the most formidable starting lineups in the entire NBA.

“He is all about winning, just winning,” Gentry said of his young star. “He’s just a unique kid and the way he approaches the game.”

The quintet of Williamson, Holiday, Lonzo Ball, Brandon Ingram, and Derrick Favors has an offensive rating of 117.9, which ranks ninth among lineups with at least 120 minutes together. Their defensive rating of 92.8 ranks third, and their net rating of +24.2 is second-best in the NBA. They haven’t had to sacrifice tempo to be great, as they rank ninth in pace at 105.2.

In fact, since Dec. 18, 2019 (well before Williamson’s debut), the Pelicans have been one of the league’s best teams, period.

At 19-10, they have the NBA’s eighth best record in that span, trailing only Milwaukee, Toronto, Oklahoma City, the Los Angeles Lakers, Utah, Boston, and Denver. They lead the NBA in scoring, averaging better than 119 points per game, three-point field goal percentage (39%), offensive rebounds (11.7), and assists (28.3) during that stretch as well.

The New Orleans Pelicans are a basketball team. Finally. They are whole and they are united in purpose.

Throw up the ball and let’s play.