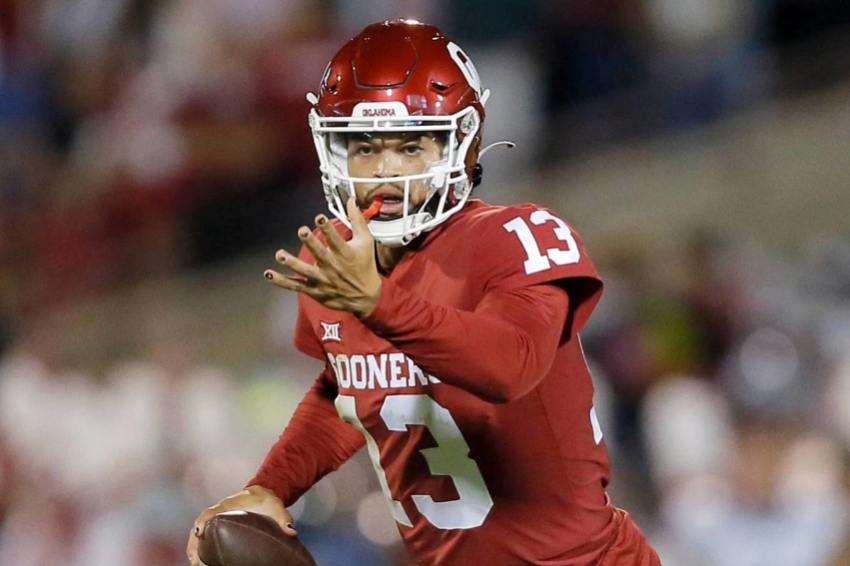 The NCAA transfer portal can provide a quick fix if college football progarams can lure some of the prime candidates with the most upside available.

Some players in the portal simply need a fresh start. A few are leaving current addresses due to recent coaching changes. Many just want a better chance to play and succeed.

After scouring the list, I might have discovered a few gems who can provide immediate upgrades elsewhere.

There are a pair of signal callers who will have no shortage of suitors.

Oklahoma’s Caleb Williams, who wrestled the starter’s job away from Spencer Rattler, was taken back by the sudden departure of head coach Lincoln Riley to USC. Williams threw for 1,912 yards with 21 TD’s and only four interceptions as a true freshman. He also ran for additional 442 yards and six touchdowns. The list of interested programs is as long as you can imagine.

Marshall’s Grant Wells (6-2, 203) threw for 3,433 yards, 16 TD’s and 13 interceptions this season. He has 23 starts under his belt from his time with the Thundering Herd, who just played in the R+L Carriers New Orleans Bowl. Wells completed 18 consecutive passes in a game against North Texas this season. Already quite experienced at the FBS level, he will have three years remaining wherever he goes.

Running back is a position with a short shelf life. You can’t have too much depth there.

Montrell Johnson (5-11, 210) made his true freshman season at UL Lafayette count, rushing for 838 yards and 12 touchdowns for the Sun Belt champions in earning conference Freshman of the Year honors. The former De La Salle star may be moving on to another program. He was recruited by numerous schools previously, including Tennessee, Colorado, Virginia, Louisiana Tech and Tulane but he may join his former coach Billy Napier, now at Florida.

Joe Ervin (5-8, 177) at Kansas State has had difficulty getting reps behind starter Deuce Vaughn, but he managed 322 yards on a healthy 5.0 yard per carry average with two scores this season.

O’Cyrus Torrence, born in Hammond, starred at St. Helena Central. He has been a three-year starter for the Ragin’ Cajuns (2 at OG and 1 at OT). He was twice recognized All-Sun Belt and was a first team All-American by Pro Football Focus. Torrence displays great leg drive as an interior lineman with a ton of experience as a starter.

The 6-foot-5, 335-pounder will targeted by many programs, but he could also be ticketed to join Napier in Gainesville. Torrence suffered a concussion in a November auto accident but does not appear to be any long term concern.

Brandon Joseph (6-1, 193), Northwestern safety, has three years of eligibility remaining. Joseph became a leader and fixture at the Big Ten program, and he can do the same if he moves on to another school. Joseph was first team All-Big Ten in 2020 and made the third team this season despite a tough campaign for the Wildcats. He has recorded 131 tackles and nine interceptions including six as a freshman. The College Station, Texas product originally committed to Texas Tech before signing with Northwestern.

Brenden Rice (6-3, 205), an intriguing prospect who spent the past two seasons as Colorado, snared 21 passes for 299 yards and three TD’s this season. His big game came against Oregon where he had five grabs for 102 yards and score. Rice paced the Buffaloes in all-purpose yards this year with 822 yards and a 27.6 kick return average. He runs a 10.78 in the 100d meters. His father is none other than Hall of Famer wideout Jerry Rice.

Christian Gonzalez (6-2, 200), a big cornerback with length, has been recognized as one of the better defenders in the PAC-12 in each of the previous two seasons at Colorado. He was recruited to Boulder by Mel Tucker, who left shortly after to take the Michigan State job. Colorado cornerbacks coach Demetrice Martin just left for Oregon, so Gonzalez might be considering Eugene as a landing spot.

Shocky Jacques-Louis (6-0, 190) has one year remaining after compiling 83 career catches for 1,010 yards and three scores with the Pitt Panthers. He is a solid outside receiver with 24 grabs for 259 yards and one touchdown this past season.

Nick Turner (5-11, 190), a former Brother Martin star, spent the past two seasons at Arkansas. He was a three-star prospect in 2020. Turner plays well in coverage but only one tackle this season against Mississippi State. He may provide versatility between the corner and safety spots.

Tatum Bethune (6-1, 235) is a proven linebacker out of UCF. The Miami native started 11 games this season, racking up 108 tackles. He had a career-high 18 stops vs. South Florida and added 17 against East Carolina with 11 more against Tulane. It appears Florida State and Tennessee are the frontrunners.

Cameron Bright (6-0, 220), who has one season remaining, was a 2021 team captain and leader for ACC champion Pitt. He made 53 tackles with 3.5 sacks. The Montgomery, Alabama product is extremely durable, having not missed a game since the beginning of the 2018 season. His carreer tallies are 177 tackles and 9.5 sacks. Bright displays good technique, stuffs the runs and plays with an attitude.

SNAPPY PICKUP: It may have gotten lost in the shuffle, but LSU added a deep snapper via the transfer portal. Slade Roy arrived from East Carolina primarily through the efforts of new special teams coach Brian Polian. The 6-3, 216-pound Roy, who has 3 years of eligibility remaining, holds a 4.3 GPA. His average snap time to the punter is a top-notch 0.66 seconds with excellent accuracy.