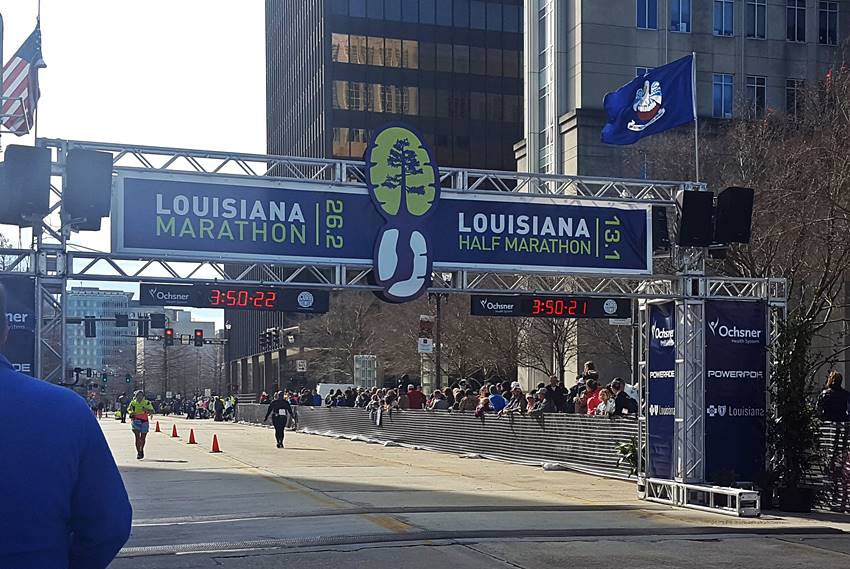 The ninth annual Louisiana Marathon was held in Baton Rouge this past weekend.

It’s a three-day celebration centered around the main event Sunday. The Expo was held on Friday and Saturday while three races scheduled took place on Saturday – the 5K, 1/4 Marathon and the Blue Cross Blue Shield of Louisiana Kids Mile. The weekend concluded with the Louisiana Marathon and Half Marathon on Sunday under cold, windy weather to start but ended up a little warmer. This year Mother Nature was kind on both days.

The highlights of the marathon weekend was three law enforcement officers from three different states 0 Officer Danny Follett from Des Moines, Iowa, Sergeant Keegan Hughes from Blue Springs, Missouri and Detective Sean Dodge from Modesto, California – who ran in honor of fallen local Slidell Police Officer Jason Seals who died from injuries suffered in the line of duty in 2018 while escorting a funeral procession. Officer Follett ran the half marathon in full police gear alongside Seals’ sister while Officers Hughes and Dodge went the full 26.2 miles. Officer Hughes finished with a time of 5:09:54 and Officer Dodge finished with a time of 5:09:54.

A special outcome awaited a finisher of the Marathon. When 27-year-old runner Morgan Pittman crossed the finish line for the Louisiana Marathon, her boyfriend Chase Poche’ was waiting for her to ask for her hand in marriage in front of family and friends. She accepted so maybe this time next year we will have a finish-line wedding. Pittman finished 327th overall and 8th in her division with a time of 4:01:04.

In addition to Sunday’s winners, a total of 86 runners qualified for the Boston Marathon in April.