Coastal Carolina walks off to Omaha with sweep of LSU 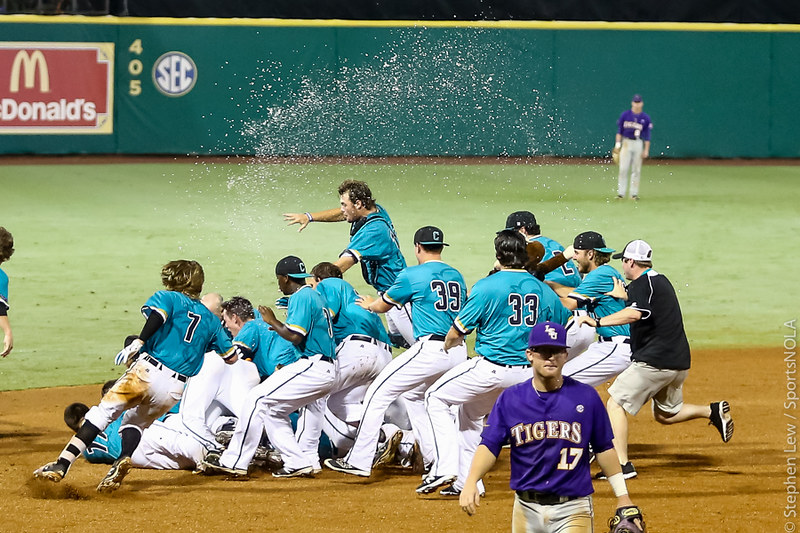 BATON ROUGE – The weekend of dramatic finishes at NCAA Super Regionals by underdogs was capped off Sunday night at Alex Box Stadium with a walk-off for the Chanticleers of Coastal Carolina.

Michael Paez’s single down the left field line scored Anthony Marks with the winning run in the bottom of the ninth as the Chanticleers completed a two-game sweep with a 4-3 victory over LSU.

Marks led off with a walk against LSU closer Hunter Newman (1-1) and stole second before Paez’s game-winning hit, which set off a teal-colored celebration between second and third base.

Now, Coastal (49-16) – under the guidance of 21st-year head coach Gary Gilmore – is headed to the College World Series for the first time in program history.

“Not anyone doubted we could do this,” Marks said. “We had a slow start this season, but just stuck to the process. Nobody deserves this more than Coach Gilmore.”

Added Gilmore: “This is one of the few times in my lives I’m at a loss for words. I just feel like it was destiny for us.”

“They did everything better than we did,” said LSU coach Paul Mainieri. “They get the trip to Omaha and we get to put the bats away.”

Cole Freeman led off the top of the ninth against reliever Bobby Holmes (6-2) when he reached on an error by Coastal second baseman Cameron Pearcey, who was an injury replacement and making his first start since March 22.

With Antoine Duplantis at the plate, Freeman went to second on a wild pitch. Duplantis, who was trying to bunt, drew a walk to put runners at first and second.

Jake Fraley was then called on to bunt, and he got one down the third base line. With the first baseman also crashing, Pearcey covered first, but dropped the throw when he and Fraley collided at the bag, allowing Freeman to score the tying run and sending Duplantis to third.

The expected explosion of the Alex Box Stadium faithful was muted until Fraley got up and remained in the game.

Kramer Robertson’s bouncer back to the mound moved Fraley to second and held Duplantis at third, and an intentional walk to Greg Deichmann loaded the bases.

The Tigers could not take the lead, however, as pinch-hitter Brady Wofford struck out and Beau Jordan flied out to left field.

LSU played from behind the entire night. The Tigers trailed 3-1 entering the seventh and got a run back when Duplantis pulled a two-out double down the left-field line, scoring Chris Reid. It was the Tigers’ first hit with two outs in the series.

That would be all they got in the inning, however, as Fraley grounded out with the tying and go-ahead runs in scoring position.

LSU had another opportunity in the eighth as the Tigers loaded the bases on a Robertson single, an error on Jordan Romero’s grounder and a walk to Reid. Michael Papierski bounced into a force play to end the inning.

Coastal also loaded the bases in the bottom of the eighth on an error and two walks, but Hunter Newman pitched out of the jam.

Despite the late-inning rally, LSU left eight runners on base in the final three innings and 12 runners on the night. The Tigers were 3-for-17 with runners in scoring position.

“We’ve gotten so many clutch hits throughout the year,” Mainieri said. “Hitting’s the hardest thing to do in baseball. We had the right guys up there many times and it just didn’t happen for us.”

The Tigers’ first run came in the third inning when Reid walked, moved to second on a balk and scored on Freeman’s double inside the bag at third.

LSU – the visiting team for the second game of the series – practically gifted Coastal Carolina two runs in the bottom of the first inning. Marks led off by hitting a slow chopper between first and second. Greg Deichmann tried to play the ball and went down to a knee, and Poche’ was slow to get to the bag, allowing Marks to reach.

Marks then tagged and moved to second on Paez’s fly ball to center, when seemingly no one on the LSU defense was aware the runner was tagging. After a wild pitch moved Marks to third and Connor Owings walked, Zach Remillard struck out on a 55-foot curveball from Poche’, which kicked away from Mike Papierski and allowed Marks to score and Owings to reach second.

G.K. Young then followed by a sharp single to right. Antoine Duplantis had time to throw out Owings at home, but his throw bounced four times before it got to the plate.

The other Coastal run came in the sixth when Young led off with a single and moved to second on a sacrifice. Parker Bugg relieved starter Jared Poche’ and allowed a single to the first batter he faced, Kevin Woodall Jr., scoring Young.

“I felt great today,” Poche’ said. “Nothing held me back.

“To lose the game to end the season is heart-breaking, but at the end of the day, someone had to lose. Unfortunately, it had to be us.”

Added Mainieri: “The finality of it is almost unbearable. I’ve been doing this a lot of years and it doesn’t get any easier.”

And just as someone had to lose, someone also had to win.

“These are, no doubt, the two biggest wins in the history of our program,” Gilmore said.

Coastal Carolina will meet the winner of the only undecided super regional between No. 1 national seed Florida and Florida State. The Gators and Seminoles meet in Game 3 of their series on Monday.