Coach O gets an ‘A’ for his honesty, renewed passion at LSU 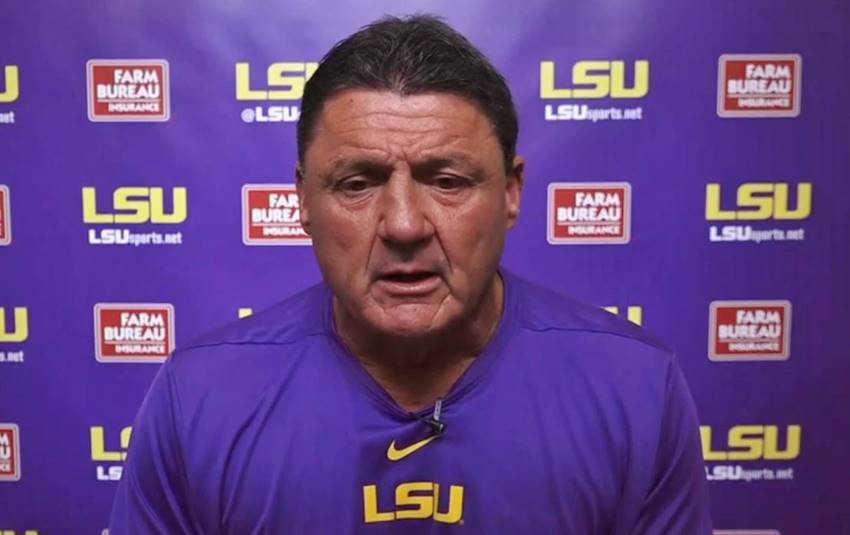 Everyone appreciates anyone who is candid, upfront, revealing, genuine and honest.

The supposition is that whomever utters that opening has not been honest previously.

That was the case Wednesday.

In the process, Orgeron won the press conference, popular vernacular in our business for when a coach acquits himself well in a mass media setting in his comments and with how he answers questions.

Orgeron uttered a truly off-the-mark, if not plain ignorant statement last September about his defense going into the 2020 season being much better than it was in the midst of a national championship season.

The statement was meant to prop up Bo Pellini. It was a blatant put-down of Dave Aranda, who was part of a national championship staff.

Yes, Pellini employed an attacking style, which was to the delight of Orgeron.

It was also the delight of opponents, who shredded the Tiger defense which gave up the most passing yards in the nation per game.

In the words of Robert Plant and Led Zeppelin, the LSU defense, aside from physical shortcomings, looked dazed and confused throughout the 2020 season.

Then, there was the offense.

While LSU scored points and did good things with three different starting quarterbacks, the fit was not obvious or comfortable with Scott Linehan.

Brady’s performance earned him a promotion to the NFL.

Linehan basically was in the midst of a demotion from the NFL.

While that characterization may not be fair, there is a perception attached to the optics.

In a startling revelation Orgeron admitted that he did not interview Pellini, Linehan or Kevin Faulk, who had been promoted to running backs coach.

To be fair, Faulk was already part of the LSU football program as the Director of Player Development and he was well known and widely accepted with those in and around the program.

Still, who hires coordinators to run a program without speaking with the hires personally, particularly at a school coming off of a national championship?

The concept smacks of perhaps being a big lazy.

It is hard to match the highest level of intensity, commitment and passion annually to be a championship team.

Of course, it starts with talent and with good leadership.

When you hit on a perfect season and national championship, it most certainly buys you insurance, equity. Orgeron has and deserves that and he deserves the benefit of the doubt, despite any lingering doubt regarding who he is and what he is capable of.

Orgeron is personable, welcoming to all, easy to engage in conversation with.

Orgeron is one of our own, a native of Larose, out of South Lafourche and Northwestern State.

I was blessed to do play-by-play for a few Ole Miss games on television for COMCAST when Orgeron was the coach of the Rebels.

In hotels and outside of stadiums, Orgeron greeted everyone warmly and enthusiastically. He recruited pretty well.

Inside of stadiums, his teams were capable but were a tease, just falling short.

Those failures went a long way in shaping the man and coach Orgeron is today. He learned from his mistakes in Oxford. The end result was a national championship in Baton Rouge.

Now, he must learn once again following a tumultuous year in his personal life, with social justice issues, with the Husch Blackwell Report, with a team that fell way below expectations and with bad hires.

Orgeron has taken steps to do so.

He addressed changing his staff. With a defensive background, he vows to get more involved on that side of the ball, lending his expertise to new defensive coordinator Daronte Jones.

Matt Canada was a miss. So were Pelini and Linehan.

Joe Brady was a hit. So were Aranda and Greg McMahon. Steve Ensminger was solid.

How will Jones, Jake Peetz and DJ Mangas work out?

He addressed his obviously short-sighted, off-the-mark statements prior to last season. He has addressed his players, who played very hard for him at the end of last season in truly inspiring, encouraging wins over Florida and Ole Miss, despite being short-handed.

It is a very quick path, a quick trip from the penthouse to the outhouse.

All were fired after winning national championships, some sooner, some later down the road after reaching the top of the mountain.

The climb is treacherous but fun. The descent is terrible and miserable.

Orgeron got the job after Jimbo Fisher and Tom Herman decided to opt out of the process.

After the 2017 season, Orgeron was deemed by many observers on a national level to be on the proverbial “hot seat,” perhaps about to get burned and discarded by LSU.

Instead, he was on top of the college football world two seasons later and LSU was as hot of a destination for recruits as any spot in the country.

It is refreshing to hear anyone admit his or her shortcomings.

As I have learned over the course of a lifetime, recognizing failures and weak spots is the first step toward erasing those errors and correcting them.

Coach O appears to have that mastered.

Now, it is all about mastering the business of getting it right—again.

To be perfectly honest, it can happen.

It is more likely that LSU fans will be saying “Go Tigers” as opposed to saying “O must go” in the near future, based on the talent on hand, the fixing of perceived problems and the attraction of the program to prospective recruits, who are responding quite well.

Remaining in the theme of being perfectly honest, here’s hoping we see the version of Coach O defiantly, even with vulgarity, screaming in the locker room following a big win over Alabama which the fans loved as opposed to the subdued version after a loss to the likes of Mississippi State or Missouri.

That is the real Orgeron, the one LSU needs moving forward, to be perfectly honest.