He has been an outstanding soccer coach for nearly three decades, teaching young men the sport.

More importantly, Alan DeRitter has shared his faith in Christ through his teaching religion at every school he has worked at over an extended period of time. 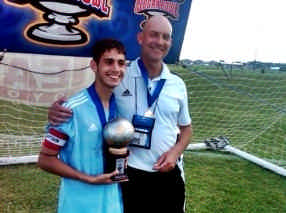 That includes at Brother Martin, St. Martin’s Episcopal, Archbishop Shaw and now De La Salle, where he has served as head soccer coach since 2013 and also assists as a special teams coach for the Cavalier football team.

At Brother Martin, DeRitter guided the Crusaders to a state championship in 2000 and he was the LHSSCA Coach of the Year. His team repeated as state champion in 2001.

DeRitter also serves as the Director of Coaching for Soccer Innovations of America, a position he has held since 2004.

Over an extended period of time, DeRitter has taken teams he has coached to brought teams to Portsmouth, England, Como, Italy, Wels, Austria, Hjorring, Denmark and Berlin, Germany.

All are welcome to attend.