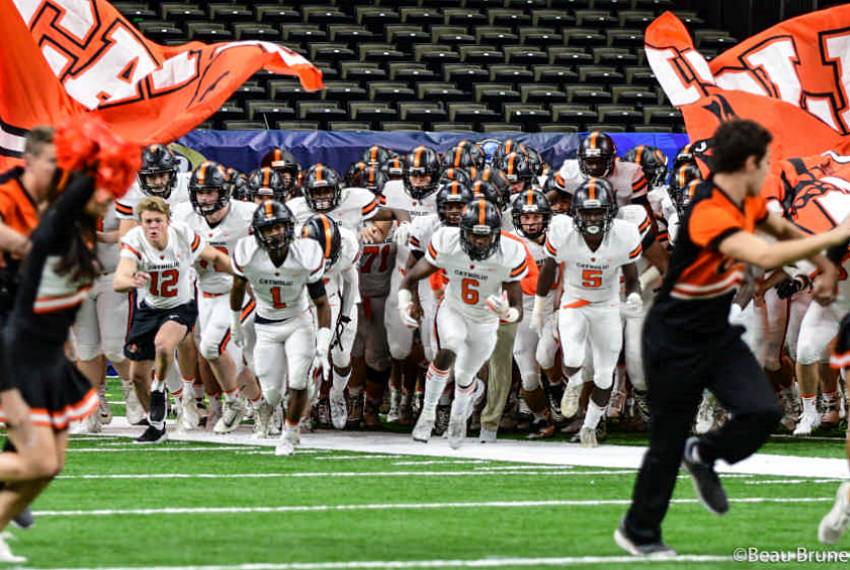 Suffice it to say that every single infraction committed by schools in sports sanctioned by the Louisiana High School Athletic Association cannot be detected, caught or validated.

Critics will always maintain that many schools get away with many inappropriate acts as blatant cheaters.

While the proverbial finger of accusation will always skew and be pointed at private schools, there have been several public school offenders as well.

Everyone is in favor of blatant cheating being caught, prosecuted and punished. Everyone would love to see that cheating eradicated.

Unfortunately, that will never occur as there are simply too many schools and too many items with which to deal.

The most recent case involving Catholic High of Baton Rouge is proof that there is investigation and enforcement taking place in the organization.

One must feel bad for those not involved in poor behavior who have their legacies tarnished.

Obviously, many of the student-athletes were not culpable in what was done wrong.

We cannot reveal exactly what the infractions were, though I have been told for up to 18 months now that Catholic was under an intense microscope for numerous potential violations.

As always, we deal in fact, not partial truths or rumors at CrescentCitySports.com.

The LHSAA has taken the approach of not revealing any details of investigations or punishments doled out.

It is up to the schools in question to put out any information in that regard. Catholic did so Monday.

While I understand the approach of the LHSAA to avoid negative publicity and irresponsible reporting, releasing factual information is never a bad thing and will never result in anything but real conclusions from level-headed observers.

The issue is social media, and its vast influence on the public.

Separating fact from fiction is difficult for many and there are many contradictions posted.

Opinions are a good thing and the freedom to express them is important in our free society.

In the course and discourse of doing so, false narratives emerge and continue to emerge as aspersions are cast with regularity.

What we do know is that Catholic High, a fine school with an esteemed athletic program, did wrong and it was more than a passing phase or minor, one-time infraction.

What we do know is that Catholic High admitted to its wrongdoing and accepted the punishment.

What we do know is that Catholic has a new football coach and a new athletic director.

What we do know is that young men associated with the program who did no wrong will be unfairly categorized, the nature of such occurrences.

Hopefully, the latest transgressions of a private institution will not damage relations with public brethren as we continue to maintain that the LHSAA would be better served to reunite the organization for the betterment of young people and competition.

Public schools, as mentioned, have been offenders in recent years as well.

The public vs. private debate will continue to resonate in may circles.

Both are good options with good people.

Rather than going public with information, the organization chooses to remain private.

That is there prerogative and despite not agreeing, we respect it.

Somehow, you knew I would conclude this with public and private, didn’t you?