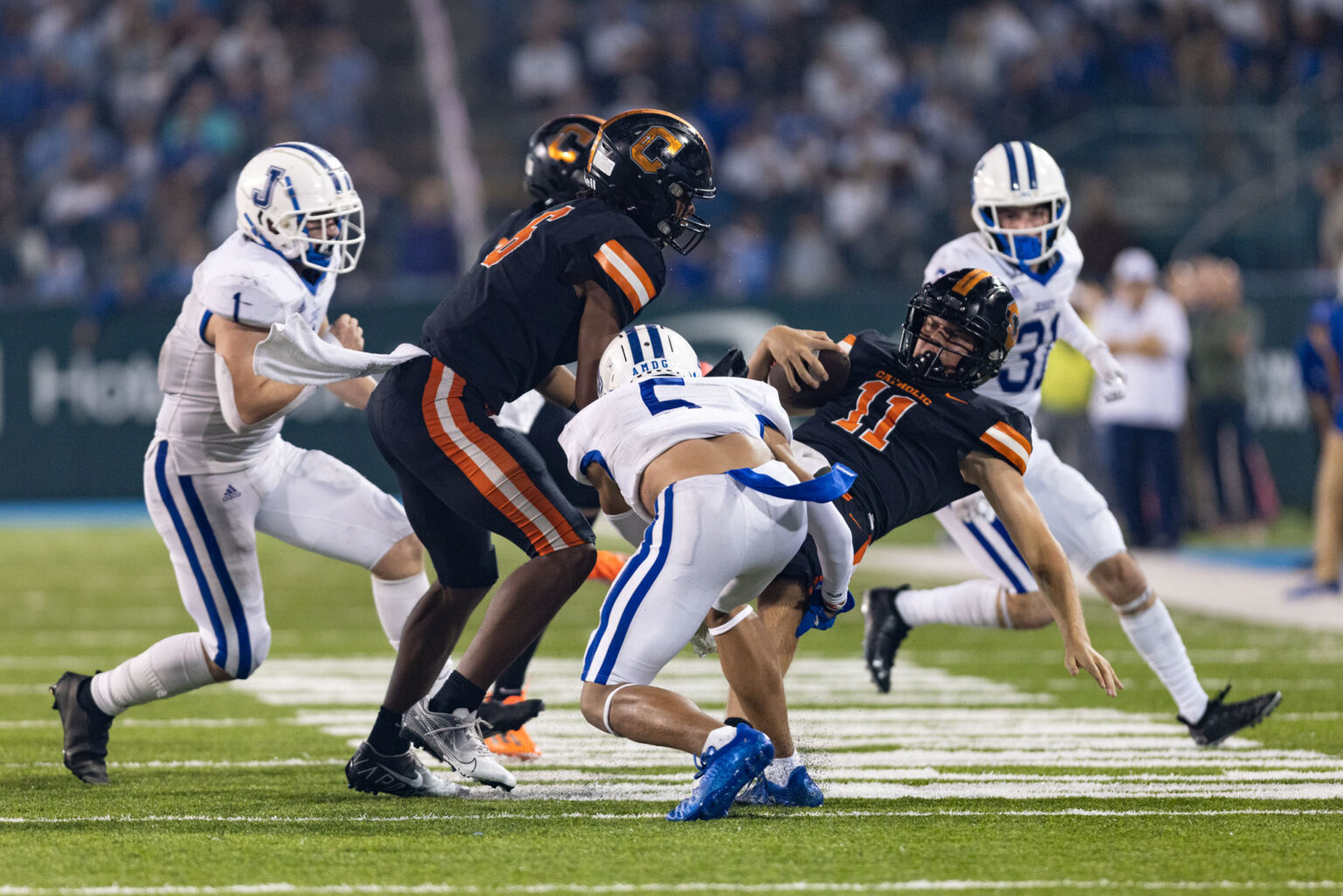 NEW ORLEANS – It was a game billed as a battle of the defenses, and it proved to be just that.

Neither Catholic or Jesuit managed to score a point in the second half and that suited the top-seeded Bears just fine.

Catholic relied on ball control to dominate time of possession to hang for a 14-10 victory over second-seeded Jesuit to claim the LHSAA Division I state championship Saturday night at Yulman Stadium.

A week after dominating the line of scrimmage in a resounding victory over Catholic League rival Brother Martin, the Blue Jays had the script flipped on them by the Bears. On this night, Catholic dominated the line of scrimmage after halftime, controlling the ball for nearly 18 minutes to wear down the stellar Jesuit defensive front and bring the title back to Baton Rouge.

Catholic (12-1) knew that the key to victory was slowing down Jesuit quarterback Jack Larriviere. The best way to accomplish this feat was to play keep away. There was no better example of this strategy than the final drive of the night.

After forcing a Jesuit punt with 9:02 to play, the Bears took over at their own 8-yard line. The Blue Jays never saw the ball again on offense. Catholic rattled off a 16-play drive to wear down the Jesuit defense and run out the clock in a championship drive which covered 16 plays and 67 yards to secure the victory.

In the ultimate display of ball control, the Bears rushed 40 times and converted nine third downs to keep their offense on the field and Larriviere on the bench.

Catholic running back Taelon Nicholas was named his team’s MVP for his efforts, taking 25 carries for 109 yards and hauling in 2 receptions for 31 more.

Quarterback Daniel Beale contributed an additional 90 yards through the air on 10 of 21 passing with a touchdown. Shelton Sampson led the Bears in receiving with four catches for 31 yards while Daniel Harden additionally hauled in 4 receptions for 28 yards and a touchdown.

For Jesuit (10-1), it would prove to be an extremely frustrating night offensively with 197 yards of total offense. The Bears bottled up Larriviere, Jesuit’s game MVP, preventing big runs and holding him to only one explosive play the air.

For the game Larriviere finished with a meager 33 yards rushing on 19 carries and the Blue Jays’ lone touchdown. He also went 6-for-13 for 112 yards. Dangerous Jesuit wide receiver Jace Larsen ended up with five catches for 109 yards.

In addition to efficient ball control, Catholic’s special teams proved to also be rock solid. Facing a team that rarely makes mistakes, the Bears seized the opportunity when a high Jesuit snap sailed over punter William Hudlow’s reach and into the end zone. Joshua Robertson recovered the loose ball to immediately give the Bears a 7-0 lead with 10:45 to play in the first quarter.

Following a defensive stop on 4th and 1 where the Bears stuffed Larriviere at the Jesuit 47-yard line, the offense took advantage of the great field position. Catholic marched down the field in 10 plays, scoring on a six-yard touchdown pass from Beale to Harden, to extend the lead to 14-0 with 4:14 to play in the first quarter.

Jesuit settled down, putting up much needed points on the ensuing drive.

Larriviere immediately connected with Larsen on the biggest play from scrimmage of the game for either team, a 56-yard reception to put the Blue Jays at the Bears 24-yard line. The drive stalled before a 26-yard Aiden Corbello field goal to make the score 14-3.

The Bears had an opportunity to stretch their lead early in the second quarter on a sack of Larriviere insid e his own five yard line to force a punt returned inside Jesuit’s 20, but the Blue Jays stiffened defensively. Landon Carter’s 44-yard field goal attempt sailed wide right with 10:19 to play in the half.

The final moment of offensive success for Jesuit came through the second quarter. Starting at the Catholic 49-yard line, Larriviere had consecutive pass competions to set up the Jays at Catholic’s 4-yard line. Two plays later, Larriviere punched it in from three yards out on a touchdown confirmed by instant replay for the final points of the night.

Catholic won a second straight Division I championship game on the field in their third consecutive title game appearance overall. However, the Bears are officially recognized as non-sanctioned LHSAA title winners for the first time since 2015.

“I am so proud of our young men for putting forth tremendous effort every day and in every game,” Manale said. “They truly represent what Jesuit High School is all about.”