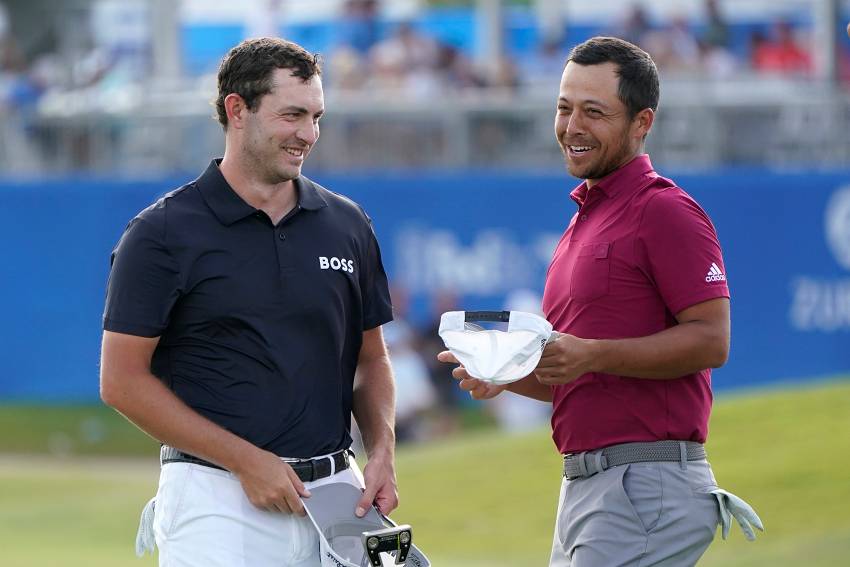 AVONDALE – A little smidge of rain arrived late Sunday in the final round of the Zurich Classic at the TPC of Louisiana.

The precipitation was too late to rain on the parade of Patrick Cantlay and Xander Schauffele.

Playing in a metropolitan area which celebrates parades galore throughout the year, Cantlay and Schauffele enjoyed an abundance of success with many good shots and a perfect result, capturing the team event by three shots over the team of Sam Burns of LSU and two-time Zurich Classic champion Billy Horschel.

Cantlay and Schauffele were one of the premier, power-laden duos in a star-studded event featuring many of the world’s top players.

A premier performance by both players for the entire tournament led to a wire-to-wire win.

Schauffele and Cantlay shot a final round even par 72 to secure the win, finishing at 29 under par 259, two shots better than Burns and Horschel, who shot a four under 68.

The winning duo seized control from the start of the event, firing a first round 13 under par 59, a record for the event, in the best ball format to take a lead they would not relinquish. They backed it up with a 12 under par 60 on Saturday in the other four-ball round.

In the more difficult alternate shot format, Cantlay and Schauffele were solid, firing a four under par 68 on Friday and settling for the 72 Sunday.

It was not the best day for Schauffele and Cantlay, who had three bogeys, but the duo made enough good shots to never give up the lead. The winners had just one bogey combined in the first three rounds.

It is the first wire-to-wire victory since the Zurich Classic became a team event in 2017.

After six straight pars, Cantlay hit a beautiful approach shot on No. 7 to within six feet and Schauffele drained a six-foot putt for eagle to extend the lead to five shots over Sam Burns and Billy Horschel, who had just registered a birdie on No. 7 to pull within three shots.

Schauffele missed a par putt on the difficult ninth hole, registering the first bogey of the day while Burns birdied the 10th hole to pull within three shots of the lead.

Then, Schauffele missed another par putt on the 10th hole for a bogey while Burns birdied No. 11 and the lead was down to one stroke, the closest it would get.

Cantlay then birdied the par five 11th hole to get back to 30 under par, two shots clear of Burns and Horschel and the pair was not threatened the rest of the way, despite bogeying the final hole for a winning margin of two shots.

Cantlay, who spent 55 weeks ranked first in the world recently, came in ranked fourth in the world. It was no surprise that he played well, coming off a second- place finish at the RBC Heritage Classic.

It is the seventh PGA tour win for Cantlay, the defending FedEx Cup champion. It is his first win since the Tour Championship in September of last year.

“It was a great week,” Cantlay said. “We had a lot of fun, both on and off the golf course. Today was a great day. We definitely bring out the best in each other. We really enjoy being out here together. In a format like this, it’s the best.”

Schauffele entered the week 12th in the world rankings. His best finish of the year was a tie for third at the Phoenix Open.

It was the first win for Schauffele since January of 2019 at the Sentry Tournament of Champions and his fifth overall on the PGA Tour.

“It’s awesome,” Schauffele said. “I said earlier this week if there’s anyone I can share success with, it would be Pat. Today was probably the worst of our four quarters. Pat was very calm which helped me stay calm. It’s been a while since I’ve been in contention.”

Horschel and Burns shot a final round four under par 68 to finish at 27 under for the tournament.

Doc Redman and Sam Ryder were third at 24 under par, shooting the second- best round of the day, a five under par 67.

It was the first year where 100 percent of fans were allowed to be on the premises at the TPC course and tournament director Steve Worthy estimated that upwards of 90,000-100,000 patrons attended over the course of the event, making it a huge success with significant monies raised for the Fore!Kids Foundation, which funnels huge dollars to many children’s organizations throughout the community.