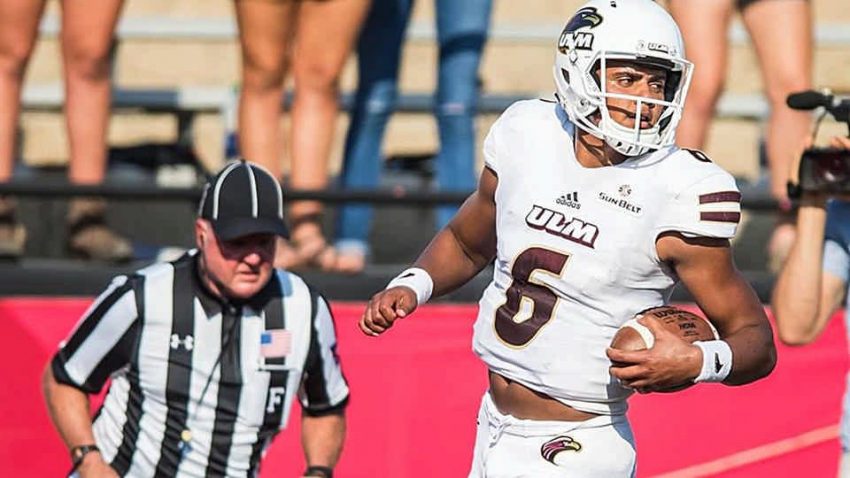 MONROE, La. – ULM senior Caleb Evans, who has accounted for 1,458 yards total offense and 15 touchdowns through five games, has been named one of the Top 20 finalists for the Johnny Unitas Golden Arm Award, presented annually since 1987 to the nation’s top college quarterback.

“Caleb Evans is a true dual-threat quarterback,” ULM head coach Matt Viator said. “Caleb can make all the throws, and he does a solid job of spreading the ball around in the passing game. He also makes solid decisions in the RPO game and has a knack for making big plays at critical moments in the game.

“Caleb is a great competitor and leader, who’s off to a quick start in his senior season. He’s consistently playing at a high level, and I know he’s looking forward to playing his best football during the Sun Belt Conference race.”

He accounted for 398 yards total offense and four touchdowns in ULM’s 52-33 loss to No. 23 Memphis. Evans recorded his third 200-yard passing game of the season and 19th of his career, completing 23-of-44 throws for 286 yards and two scores. He completed passes to nine different receivers, including TD strikes of 6 and 36 yards to tight end Josh Pederson. Evans also posted his first 100-yard rushing game of the season and fourth of his career, gaining 112 yards on 18 carries. He scored on runs of 7 and 45 yards.

Evans accounted for 313 yards total offense and four TDs to lead ULM to a 30-17 victory over South Alabama in the Sun Belt Conference opener for both teams. He completed 17-of-25 throws for 286 yards, including TD strikes of 20 yards to Pederson, 52 to Markis McCray and 21 to Jonathan Hodoh. Evans scored on a 13-yard TD run midway through the fourth quarter.

He accounted for 273 yards total offense and four touchdowns in ULM’s 45-44 overtime loss at Florida State. After starting 0-for-7 passing, Evans finished 23-of-38 for 241 yards, including scoring strikes of 33 yards to Pederson and 2 yards to Xavier Brown. Evans also rushed 10 times for 32 yards, including TD runs of 10 and 5 yards. He led ULM on four-consecutive scoring drives (three TDs and a field goal) during one stretch in the second half, as the Warhawks rallied from a 21-0 deficit in the second quarter to send the game into overtime tied at 38.

He already ranks as ULM’s all-time leader in rushing yards (1,660) and rushing touchdowns (29) for a quarterback.