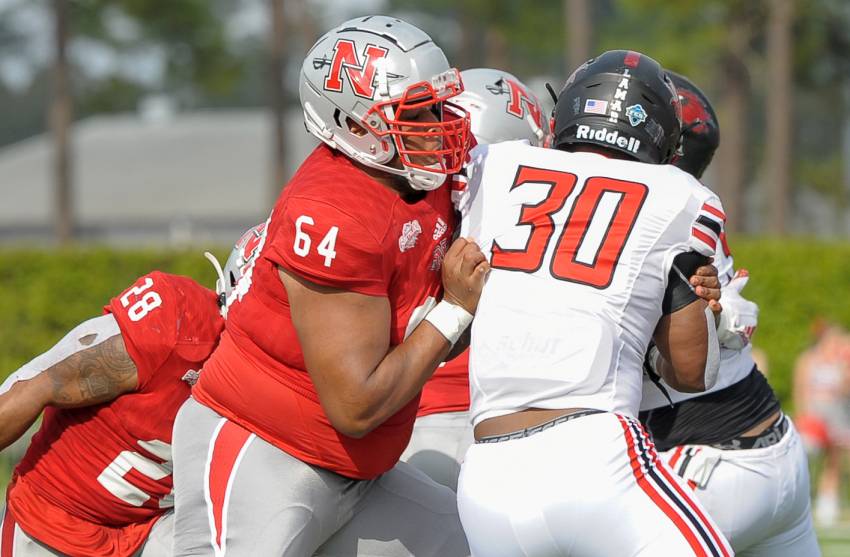 FRISCO, Texas – The anchor of one of the most potent rushing offenses over the last few years, Nicholls State University football’s P.J. Burkhalter earned a third consecutive Southland Offensive Lineman of the Year as the league office announced its honors for the 2021 fall football season.

Burkhalter was one of 13 Colonels to be named All-Southland and one of the seven first-team selections. He was joined on first-team offense by fellow lineman Jair Joseph, wide receiver Dai’Jean Dixon, and running back Collin Guggenheim. On first-team defense, three players earned their first all-league honorees – lineman Perry Ganci, cornerback Jarius Monroe and nickel Kevin Johnson.

A two-time All-American recipient, Burkhalter paved the way for the No. 5 rushing attack in the FCS as the Colonels churned out 246.7 yards rushing per game. Nicholls had the Southland’s top two rushers in Lindsey Scott Jr. and Collin Guggenheim, and totaled 14 100-yard performances by four different players. The offensive front also ranked first in the FCS in fewest tackles for loss allowed and helped the offense to a No. 4 rating in total offense. Joseph repeated as a first-team selection while Roussel landed on second team.

A Walter Payton Award finalist, Dixon turned in his second 1,000-yard season at wide receiver and led the Southland with 100.2 yards per game. He ranked fourth in the FCS in receptions (71) and was sixth in yards per game. Dixon finished with eight touchdown catches and four 100-yard games, including a record performance against nationally-ranked Louisiana where he had 14 receptions for 198 yards.

Another national finalist, Guggenheim took over as the feature running back on Oct. 26 after the Colonels lost three players to season-ending injuries. He went on to lead the Southland with a school-record 103.3 yards per game, ending the season with five consecutive 100-yard rushing games and a total of 930 yards. The Jerry Rice Award finalist had the third most rushing TDs in the Southland with 10 and ranked 13th in the FCS with 6.4 yards per carry. Guggenheim had the third-most rushing yards in a game in the FCS this season with 266 in win at Southeastern.

Franklin and Negrotto round out the selections for the offense. Franklin ranked fifth in the Southland in yards per game (57.8) and was fourth in conference play (67.9). He racked up 636 yards receiving and ranked sixth in the SLC with six touchdown catches. Franklin had two 100-yard games, capping his season with 116 and a TD in the River Bell Classic win over Southeastern. Negrotto finished fourth on the team with 235 yards receiving on 20 receptions. He had his first career touchdown catch in the home win vs. HBU.

After ranking first in the Southland in pass defense, two Colonels in the secondary were named first team. Monroe tied for second in the league with 10 breakups and was fourth on the team in tackles with 36. Johnson finished with 24 tackles, three tackles for loss and one sack. He had two interceptions in the home matchup against UIW and returned a fumble recovery 53 yards for a touchdown in the win over North Alabama.

Ganci ranked fifth in the Southland with 9.5 tackles for loss and was tied for fourth with 6.0 sacks. Ganci stepped up in the finale with 2.5 tackles for loss with 1.5 sacks in River Bell Classic win over Southeastern. Also upfront, Martin was a second-team honoree after recording 29 tackles, two sacks and four pass breakups.

Representing the special teams, Lasseigne ranked fourth in the league in scoring with 79 points. He had a league-high 11 made field goals on 13 attempts and was 46 of 47 in extra points. His best outing was a 3-for-3 game against UIW, highlighted by a career-long 45-yard field goal.

Nicholls had two honorable mentions – quarterback Lindsey Scott Jr. and defensive lineman Myles Vigne. Scott led the Southland in rushing yards (990) while throwing for over 2,000 yards. He accounted for 16 touchdown passes and nine rushing TDs. Vigne started at nose tackle for the Southland No. 1 defense in total yards in league play. He finished with 15 stops with 1.5 for loss and one sack.

The All-Southland Conference team was voted on only by head coaches and sports information directors. Voting for one’s own athletes is not permitted.