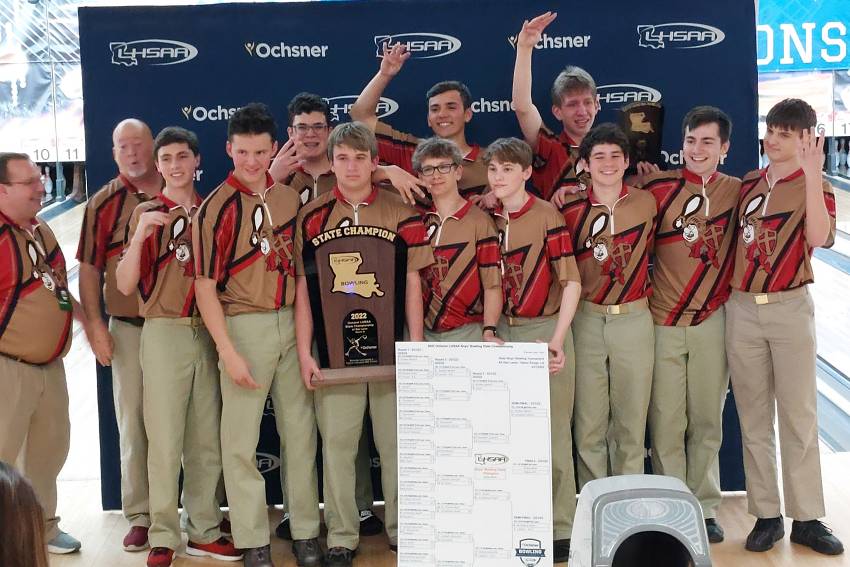 One was captured easily, and the other came down to exactly two pins.

While Denham Springs’ girls won their fifth state title – and first since a run of four straight titles from 2005-08 – with a 21-6 victory over Byrd, Brother Martin’s boys won their sixth title in the last seven championships with a dramatic 17-10 victory over Catholic High.

As is often the case in high school bowling, the score wasn’t indicative of the closeness of the match.

The difference was a pair of one-pin matches that Brother Martin flipped in the final frame – a 248-247 victory by Jacob Vangilder over Drew Babin at No. 3, and a 205-204 victory by Carson Colletti over Daniel Waguespack at No. 4.

Vangilder, who rolled a team-best 694 series in the final match, was named the Outstanding Bowler after closing his final game with eight consecutive strikes.

With the right pair finishing last, Colletti got up and struck on his fill ball to claim his match, effectively clinching the title and setting off a crimson and gold celebration.

The match was tied 4-4 after one game when the Crusaders took four individual match wins but the Bears won total pins by a 1,219-1,163 margin. Brother Martin flipped the total in their direction in game two, rolling a team 1,355 series led by a 246 from Vangilder and matching 234 games from Ashton Catalinotto and Dylan McDonald.

Brother Martin reached the finals with a 23-4 victory over Vandebilt Catholic, while Catholic advanced to its third title match in the last six years with an 18-9 triumph over sixth-seeded Archbishop Shaw, the only other representative from the New Orleans region.

Denham Springs, which dominated the sport of girls bowling in its LHSAA infancy but was making its first appearance in the semifinals in 11 years, avenged an early season loss to Dutchtown with a 19-8 semifinal win, while No. 13 seed Byrd pulled a third consecutive seed upset, downing top-seeded Ponchatoula 16½-10½.

After leading the final 5-3 after one game, Denham took over in the middle game, winning seven of eight points on the effort of a 1,017 game, led by Audrey Cedotal’s 191.

Cedotal, who was the girls championship MVP, led Denham with a 601 series.