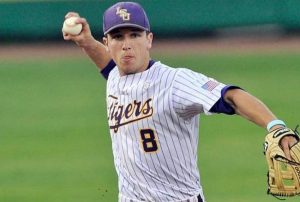 LSU head coach Paul Mainieri continued to lead one of the best college baseball programs in the country during 2010-2019. During that stretch, the team made appearances in nine NCAA Regional tournaments, six Super Regional tournaments, and three College World Series.  They won three regular-season SEC championships and four SEC Tournament titles.  All of these accomplishments occurred in what is generally acknowledged as the toughest baseball conference in the NCAA.

Mainieri’s teams featured some of the best players in the SEC.  Several were also recognized at the national level.  Two of the more notable Tiger alums during the decade included Alex Bregman and Aaron Nola, both of whom have gone on to achieve all-star status in Major League Baseball.  Many other Tigers in the 2010s were prominent in the annual MLB drafts and played professionally..

In looking back at the LSU squads over the past ten seasons, here’s my All-Decade Team representing the best players (who finished their careers in the 2010s) at each position.

Outfielder – Mikie Mahtook (2009-11). In 2010, he led the Tigers in slugging percentage and stolen bases.  Mahtook led the SEC in batting average in 2011 and was name to the All-SEC first-team and several nationally-recognized All-American teams.  Mahtook was a first-round selection of the Tampa Bay Rays in the 2011 MLB Draft. Honorable mention:  Andrew Stevenson (2013-15).

Outfielder — Antoine Duplantis (2016-19). The durable Duplantis started all but two games for LSU during his four seasons.  He is the all-time hits leader for LSU, breaking Eddy Furniss’s record of 352.  In 2016 he was named to several nationally recognized All-American teams.  He was a member of the 2017 College World Series All-Tournament team.  Duplantis was a 12th-round selection of the New York Mets in the 2019 MLB Draft.  Honorable mention: Jake Fraley (2014-16) and Zach Watson (2017-19).

Left-Handed Starting Pitcher – Jared Poche (2014-17).  Poche was a workhorse for the Tigers during his four seasons, averaging 18 starts per season.  He is LSU’s career leader in wins (39).  He was selected to the SEC All-Tournament team in 2014.  Poche was picked by the Oakland A’s in the seventh round of the 2017MLB Draft.  Honorable mention: Cody Glenn (2012-14).

Bregman finished as the runner-up for the American League MVP Award in 2019, while Nola was third in the National League Cy Young Award voting in 2018.  Mahtook and Jones were teammates for the Detroit Tigers in 2019.  Duplantis and Poche were still active in the minors last season.  Dean is currently the head baseball coach for the University of New Orleans.