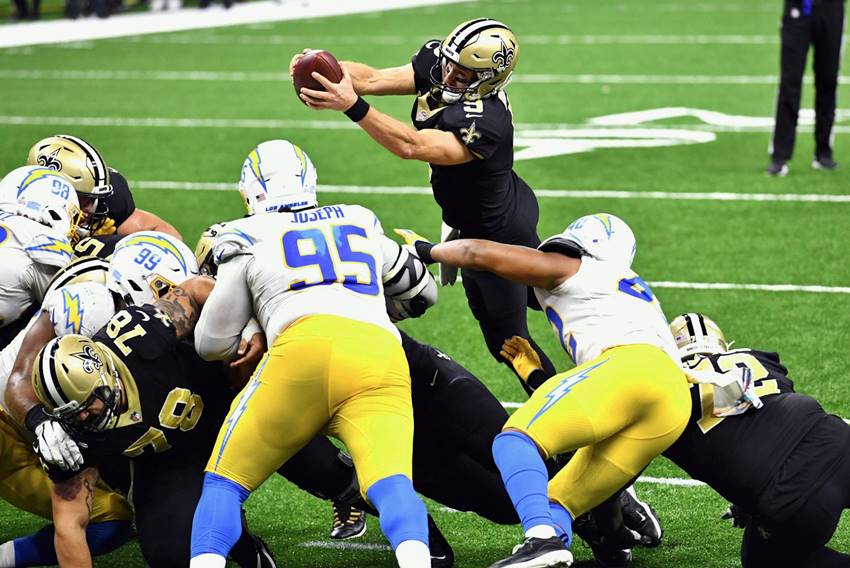 Herbert showed why the Los Angeles Chargers selected him with the No. 6 pick in the April draft and have handed him the starting quarterback position as he passed for four touchdowns against the New Orleans Saints.

But Brees, who was the one handed the keys to the Chargers’ offense a couple of decades ago, showed why he has become the NFL’s all-time leading passer while subsequently playing for the Saints for 15 seasons.

More importantly Brees showed that at age 41 he’s still capable of thinking, passing, scratching, clawing and cajoling his way to a victory that leaves observers a bit unsure as to how it exactly happened.

Brees threw just one touchdown pass and he threw the game’s only interception.

Somehow, some way it held up and New Orleans escaped into its bye week with a 30-27 victory and a 3-2 record that looks a lot better than 2-3 would have looked.

Brees and his team have been flawed and sloppy and inconsistent but they have managed to keep pace with TampaBay and Carolina atop the NFC South. New Orleans has already beaten TampaBay once and it gets a crack at Carolina after the bye.

So all in all Brees and the Saints came out of this virtually fan-free Monday Night Football game in pretty good shape.

Herbert completed 20 of 34 for 264 yards despite losing leading receiver Keenan Allen to a back injury shortly after hitting him for a first-quarter touchdown.

If Herbert had just a little more help from his friends or a tad more good fortune his 1-4 team would have given him his first win in his fourth start.

But his kicker, Michael Badgley, missed the extra point after Allen’s touchdown, allowing the Saints to ultimately negate a touchdown with two Lutz field goals.

That left more than enough time for Brees and company. Brees quickly moved the Saints across midfield before lofting a pass into a low-probability spot, but Alvin Kamara reached over a defender’s helmet and made a juggling catch for a 28-yard gain to the L.A. 15.

Taysom Hill’s 9-yard touchdown run tied the score again with just 48 seconds left, but Herbert did a heck of a Brees impersonation as he put the Chargers in position to win on Badgley’s 50-yard goal as time expired in the fourth quarter.

But the kick sailed just far enough to collide with the right upright and the ball chose to land in the north end zone rather than scoot across the cross bar.

The Saints won the coin toss to start overtime and even though Brees didn’t get the ball into the end zone for a game-ending touchdown, he did direct his team to a game-turning field goal.

On the final play of the game, Mike Williams grabbed Herbert’s pass, but was stopped by Marshon Lattimore at the L.A. 49 after a 5-yard gain on fourth and six.

Somehow Brees and the Saints won. Somehow Herbert and the Chargers lost.

The quarterbacks had much in common in this game.

When Herbert lost Allen he turned to Williams, who finished with 109 yards and two touchdowns on five catches.

In the absence of All-Pro wide receiver Michael Thomas, whose injured ankle reportedly healed well enough for him to slug teammate C.J. Chauncey Gardner-Johnson and earn a benching after being inactive for three weeks, Brees turned to Emmanuel Sanders and the two connected 12 times for 122 yards.

Both quarterbacks spread the ball around and threw completions to eight different receivers.

But there were differences.

Herbert was steady throughout whereas Brees was ineffective in the first half and nearly flawless after that. Herbert’s passer rating was 122.7, Brees’ was 87.6.

The rookie had more big plays and was more efficient.

The surefire Hall of Famer strung together enough small and medium plays to bring his team back from the edge twice.

The loss certainly can’t be blamed on the Chargers quarterback.

But the win can be credited to the Saints quarterback.