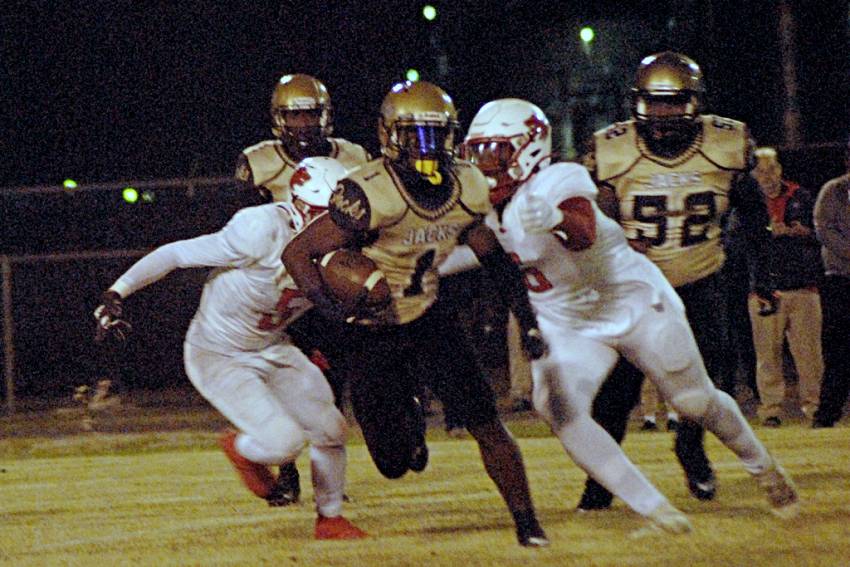 Bogalusa jumped out to a 22-0 first quarter lead on their way to a 51-28 victory over Loranger and an outright District 8-3A title on Senior Night on Friday.

Bogalusa scored the game’s first points on its second drive, as the Lumberjacks had a great stretch in three of four plays.

After the kickoff, Loranger gained 14 yards, but Dyron Jackson intercepted a pass on the next play.

On the first play of Bogalusa’s next drive, Levi found Tajdryn Forbes. Forbes broke two tackles and completed the 27-yard touchdown. Levi connected with Williams for a 16-0 lead with 7:35 on the clock. Forbes unofficially caught six passes for 112 yards and two touchdowns.

Bogalusa went up 22-0 with two minutes left with Levi and Forbes hooking up on a 1-yard touchdown pass. The two-point conversation was no good and it was 22-0 after one quarter.

After the quick start, Loranger came back several times, trimming the lead to one possession, but Bogalusa continually made big plays to extend the advantage.

“Whatever it takes to get it done,” Bogalusa coach Cyril Crutchfield said. “So, we had to because they were back in the game. We just kept trying to make plays and fortunate for us, we were able to.”

Loranger got on the board with 7:18 left in the second quarter in a 35-yard run by Bryce Vick. Beau Landry’s extra point was good to make it 22-7. Vick unofficially ran for 172 yards and three touchdowns.

Both teams had a chance to score at the end of the first half, but were unable to capitalize.

Loranger drove the second-half kickoff 63 yards and scored when Vick ran 41 yards, cutting the lead to 22-14 after Landry’s extra point with 10:36 to go in the third quarter.

But, as they did all game, Bogalusa extended the lead. Levi ran 55 yards to pay dirt for a 28-14 lead after the two-point conversion was no good at the 5:22 mark.

It stayed that way until the fourth quarter, as the teams combined for five touchdowns.

Loranger got the lead down to 28-21 when Vick ran for 2 yards and Landry hit the point after with 7:47 left.

Levi made another big play with a 39-yard run and then he connected with Forbes for two more and a 36-21 advantage at the 6:56 mark.

Bogalusa made another big play when Levi connected with Williams across the middle and Williams took it the distance for a 44-28 lead after Levi converted for two and it was 44-28 with 5:31 left.

The Lumberjacks all but sealed the game up less than a minute later when Reynis Morris intercepted a pass and took it back about 18 yards for the touchdown. Erin Zeno’s extra point split the uprights for the 51-28 final.

Bogalusa went 6-2 overall and 4-0 in district competition. The Lumberjacks have won five games in a row. Loranger went 2-6 overall and 2-2 in league play.