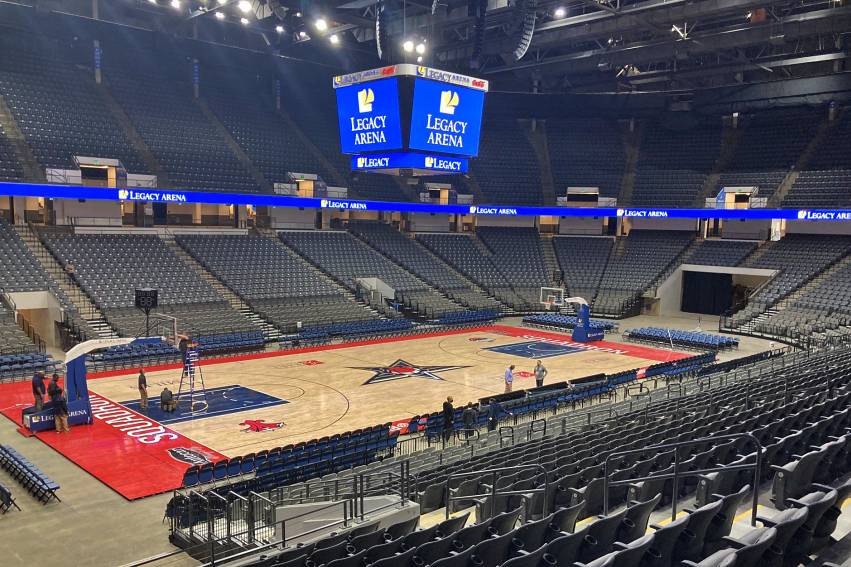 BIRMINGHAM, Ala. – The Birmingham Squadron today announced the promotion of T.J. Saint as Head Coach and Billy Campbell to General Manager of Basketball Operations. Saint is joined on the Squadron’s coaching staff by Mery Andrade, Perry Huang and Jodie Meeks.

Saint enters his first season as head coach after spending the previous three seasons with the Pelicans’ G League affiliate teams as associate head coach (2020-22) and as an assistant coach (2019-20). Prior to joining the organization, Saint served as the Director of Basketball Strategy for the University of Georgia Men’s Basketball team during the 2018-19 season. Prior to joining the Georgia basketball program, Saint was the video coordinator for the Detroit Pistons from 2014-18. Saint graduated from Belmont University with a bachelor’s degree in business development, where he also served as a student assistant coach with the men’s basketball team from 2009-11. He then went to Butler University, where he worked as a graduate assistant coach while earning his master’s degree in effective teaching and leadership. Upon graduation, he was promoted to director of basketball operations with the Bulldogs for the 2013-14 season.

Andrade joined the organization prior to the 2019-20 season after serving as an assistant coach for the University of San Diego Women’s Basketball team from 2015-19. The native of Lisbon, Portugal began coaching after a successful professional playing career that spanned over 10 seasons in both the WNBA and Europe. Andrade began her playing career with the WNBA’s Cleveland Rockers after being drafted in 1999 with the 23rd overall pick. Andrade played for Cleveland from 1999-2002 and played one season with the Charlotte Sting (2004). Additionally, her international career included multiple stops in Italy from 2001-12, and again during the 2014-15 season, and Portugal during the 2012-13 season. Before playing professionally, Andrade played four seasons (1995-99) at Old Dominion University, where she helped the Lady Monarchs to the Sweet 16 three times and to the national championship game as a senior in 1999.

Huang returns for his fourth season as an assistant coach with the organization. Huang brings experience from the WNBA, G League, international and collegiate levels, including his other current role as an assistant coach/manager of video & player development with the Seattle Storm. Prior to joining the Erie Bayhawks and Storm, the Monterey, Calif. native has had stints with the former G League Northern Arizona Suns (2017-18) as an assistant coach, BC Prievidza of the Slovak Extraliga (2017-18) as a video coordinator and his first professional coaching job with the Santa Cruz Warriors as a coaching associate (2014-16). Huang began his career as an assistant men’s basketball coach for four years with Cal State San Marcos and Monterey Peninsula College after graduating from Fresno Pacific University.

Meeks enters his first season as an assistant coach with the Squadron after most recently appearing in 18 games for the G League’s Raptors 905, averaging 10.4 points, 2.9 rebounds, and 1.4 assists in 20 minutes per game during the 2021-22 season. Selected 41st overall by the Milwaukee Bucks in the 2009 NBA Draft after a three-year collegiate career at the University of Kentucky, the 10-year NBA veteran appeared in 539 career regular season games with Milwaukee, Philadelphia, the Los Angeles Lakers, Detroit, Orlando, Washington, and Toronto, posting averages of 9.3 points, 1.1 assists and 2.1 rebounds in 22.5 minutes per contest.