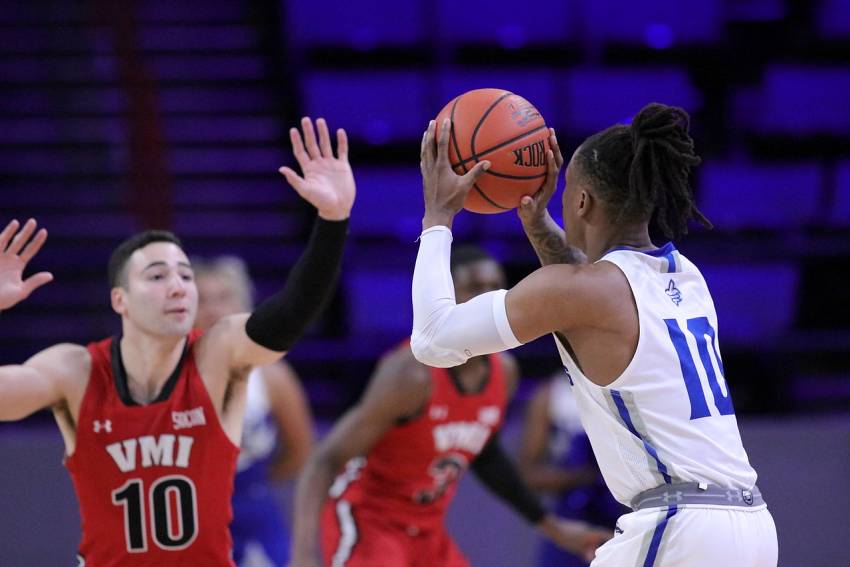 NEW ORLEANS – Derek St. Hilaire dropped 22 points as the Privateers men’s basketball program ended its Thanksgiving holiday on a high note with a 79-71 victory against VMI in a non-conference contest on Friday afternoon at the Lakefront Arena.

The game was the third and final one for the Privateers on the week as New Orleans concluded their participation in the UNO Classic presented by Embassy Suites, the first multi-team tournament hosted by the Privateers since the UNO Christmas Classic during the 1998-99 campaign.

INSIDE THE BOX SCORE
– St. Hilaire finished with a game-high 22 points to go with a season-best five boards, three steals and an assist. He has now gone for 20-plus points in six of seven Privateer contests this season.
– Veteran Troy Green had one of his best games of the season so far as he registered 17 points, six rebounds, five assists and a steal.
– De’Sean Allen-Eikens had his best day as a Privateer as he racked up 13 points, an assist, a block and a steal. He went a near-perfect 4-of-5 from the field and 3-of-3 from beyond the arc. He did all this in just 18 minutes of play.
– Daniel Sackey (nine points), Simeon Kirkland (eight), Robby Robinson (four), Tyson Jackson (four), and Kmani Doughty rounded out the UNO scoring attack.
– The Privateers had 15 assists as a team compared to just 10 turnovers.
– New Orleans scored 28 points in the paint, had 19 points off of turnovers, 21 fast break points and 23 points off the bench.
– The game featured five times that the score was tied and six lead changes.

HOW IT HAPPENED
– New Orleans and VMI played a back-and-forth opening half that saw the Privateers walk into the locker room with a 38-37 edge.
– The Privateers made their adjustments and came out of the second half on fire as the unit went on a 23-7 run over the first eight minutes to jump ahead by 17, 61-44.
– VMI was able to work its way back into the game slightly, but never got closer than six points, as New Orleans was able to close out the 79-71 victory.

NEXT UP
The Privateers hit the road for two big non-conference games next week, a showdown with Texas A&M on Tuesday, Nov. 30 and a clash with Louisiana on Friday, Dec 3. Tuesday’s game is set to tip at 6 PM CT while Friday’s contest gets underway at 7 PM, respectively.