Both teams, Ole Miss and Baylor, had been to the Sugar Bowl recently with the Rebels playing in the 2016 Classic while the Bears played in the 2020 contest.

The fact that both had played here recently and the ongoing pandemic issues had no impact on the crowd, which was superb.

Defense dominated early in the first scoreless first quarter in a Sugar Bowl since 1986.

Then came the clear turning point.

Ole Miss lost star quarterback Matt Corral to a leg injury late in the first quarter on a sack by Cole Maxwell.

It was a brutal position to put Altmeyer in.

Still, Ole Miss seemed poised to take the lead early in the second quarter before disaster struck for the youngster.

Al Walcott 96-yard pick six on a tipped pass by Matt Jones to give Baylor a 7-0 lead with 10:16 to play in the first half. The pass was intended for Casey Kelly in the left flat. It was the 18th interception of the season for the Bears.

Ole Miss had a clear chance to tie the game early in the third quarter but Deane Leonard dropped an interception of a pass by Gerry Bohannon which would have surely been a game-tying pick-six.

Ole Miss finally got it done, driving 72 yards in six plays, taking 1:48 off the clock with Altmyer throwing a perfect strike to Braylon Sanders to tie the game 7-7 with 9:13 to play in the third quarter.

It was the first college touchdown pass for Altmyer, who started 6-of-13 with an interception before connecting on six straight passes, including the touchdown pass.

Baylor then mounted a drive, reaching the Ole Miss 30-yard line but Miles Battle picked off a pass from Bohannon in the end zone. It was the first interception of the season for Battle.

Ole Miss had a chance to take the lead early in the fourth quarter but Cale Nation missed a 35-yard field goal after earlier missing one from 49 yards out.

Nation was kicking because former Mandeville star Caden Costa was suspended for testing positive for a performance enhancing supplement. Costa had been very good for the Rebels, converting 14-of-17 field goals and 46-of-48 extra point attempts.

The game then changed in huge fashion for Baylor.

It took just five plays for Baylor to take the lead, coming on a big play as Monaray Baldwin raced 48 yards for a score to give the Bears a 14-7 lead with 11:14 to play in the game. It was a simple speed sweep and Baldwin got good blocking and raced untouched to the end zone to cap an 8-yard drive.

Altmyer then made the big mistake he could not make, throwing another interception, this time to JT Woods, his second interception of the game, giving Baylor the ball at the Ole Miss 15-yard line with just under 10 minutes to play in the game.

The Bears took total advantage, putting the game away as Bohannon hit Tyquan Thornton on a 2-yard touchdown pass to make it 21-7 with 7:24 to play in the game.

Abram Smith was simply outstanding for the Bears, running hard, running through contact all night long, wearing down the Ole Miss defense. Smith finished with 25 carries for 172 yards.

The Baylor defense recorded an astonishing 10 sacks of Altmyer and Corral. Conversely, Ole Miss had no sacks.

Altmyer finished 15-of-28 for 174 yards with a touchdown and the two interceptions.

The crowd was superb, with a tremendous turnout by Ole Miss fans and a very good turnout by Baylor supporters.

The debate will escalate, even rage about top prospects opting out of bowl games that are not playoff games.

Corral is rated as perhaps a late first-round draft pick in the 2022 draft, either the first or second-ranked quarterback in the draft.

Injuries, unfortunately, do happen and it is clearly understandable for those who take the position of deciding to play it safe and to not play.

Of course, the strong feelings of abandoning teammates by opting out are clearly understandable as well.

Ultimately, the concept of expanding the playoff system could very well solve much of the problem.

With teams competing for a national championship, the numbers of opt-outs will be drastically reduced.

That is why the expanded playoff system is now appealing and will come to pass.

Meanwhile, Dave Aranda has proven his worth yet again.

Aranda was very good at Wisconsin as a defensive coordinator.

He was very good at LSU as well, despite his former boss, Ed Orgeron, basically taking a shot at him on the way out.

Aranda gave Baylor its first 12-win season and won a New Year’s Day bowl, which Baylor had not done in three previous tries.

He is a Sugar Bowl champion, the first Sugar Bowl title for the Bears since 1957.

Regardless of Ole Miss losing Corral, Baylor earned the win. 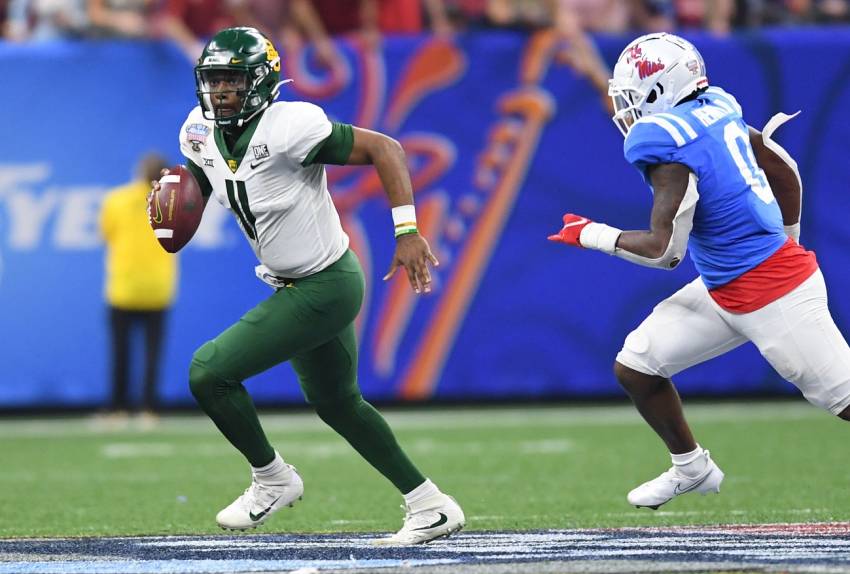